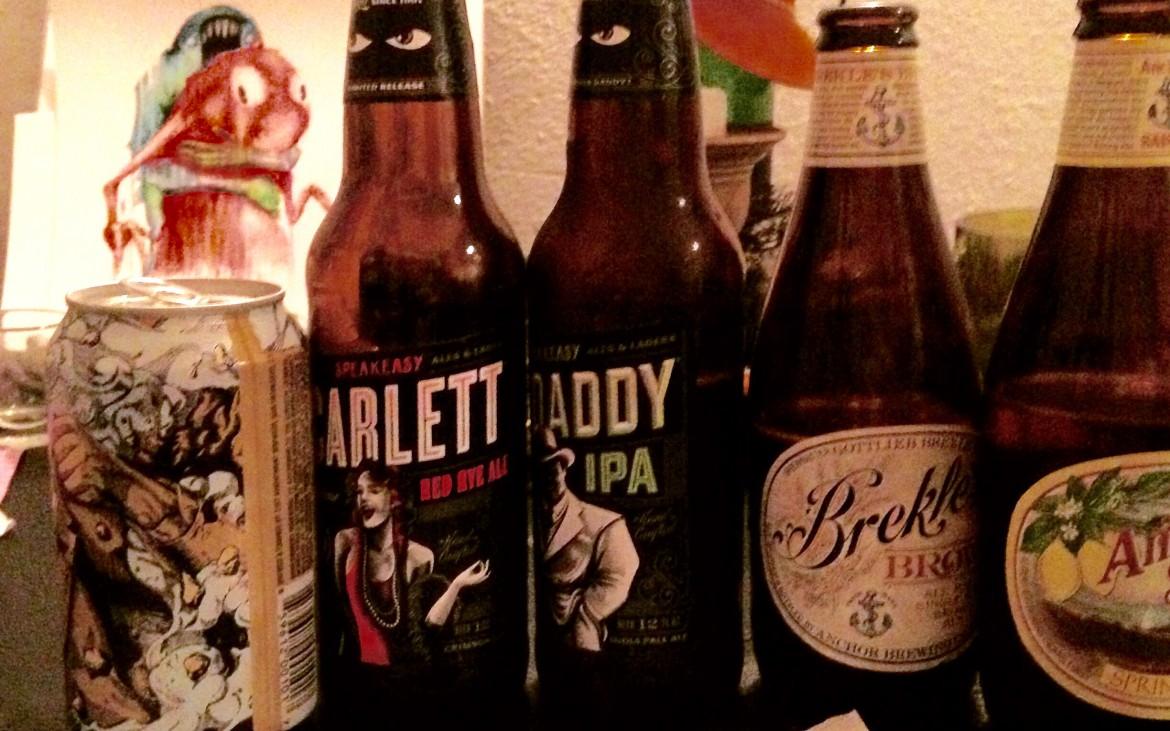 We (tried to) review five beers total from three local breweries that participated in the fiasco.

Beer Week is currently happening and San Francisco has gone crazy, yet again.

Close to 2,000 people purchased tickets for the Opening Gala at Fort Funston Feb. 6, which featured ales, pilsners and lagers from 80 different breweries. Local restaurants even joined in on the madness, too. Cathead’s BBQ on Folsom Street infused Headlands Brewing Co.’s Hill 88 into their delicious lamb meatball sandwiches. Peter Rizos from the San Francisco Cheesecake Company infused Abyss brew by Deschutes Brewing into his cheesecake.

So, naturally, we wanted in on the fun. We (tried to) review five beers total from three local breweries that participated in the fiasco.

Here’s what we thought.

Anchor Steam’s Breckle’s Brown, 6% came out the winner of the five local brews. The malt single hop brown ale went down smooth, was nice and refreshing. Comments included “smooth”, “delectable” and “fruity”. Not overwhelming. Scored average of 4.5 out of 5 with these professional college beer-drinkers. The red color is very pleasing to the eye…one odd commenter said. The consensus we came to about Anchor Steam was that it’s not your favorite brew right off the bat, but once your palate is used to the brand, something amazing happens. That amazing thing is the breweries Brekle’s Brown. This is not a message condoning drinking, but…try it now!

[At this point, we decided to call a spade a spade and retire our professional beer reviewer hats. Instead of trying to fake the lingo and come up with something profound, we just sat back and recorded our candid reactions. We thought you’d find this funnier. ]

Second place in the contest was Anchor Steam’s Saison

Reuben: I don’t know why, I think it’s just like tasting crap bitter. This is the first time I’ve ever seen Spring ale.

C:… I feel like this would be a good summer beer. It seems lighter to me, and just goes down smooth. I don’t know, it doesn’t have a lot of spices, I think.

Hillary: This is really the time I’m realizing we don’t have the skills to review beer.

C: I definitely don’t have much of a beer palate. Not much of a wine palate either.

R: I think this is thin bodied. It just goes down really smooth. So that’s a way to describe it, it’s thin bodied.

C: Not hoppy… that’s my extent of describing beer.

R: Here’s another one.. “ester-y”. It’s flowery, a combination of flowery and fruity.

H: Where did you come up with that word?

…Would you call it salty? Or tart?

R: Would you say reminiscent of wine?

R …with a slight vine-y flavor..

C: It’s more reminiscent of wine than other beers I’ve had.

H: What does that mean?

C: Ha ha ha, pfft. I don’t know, I’m just talking out of my ass. I still stand by the fact that I feel like it evokes a bbq flavor…it’s smokey, I don’t know what it is.

C: That’s my personal opinion. People need to know that I’m not an expert, so..

R: What’s the mouth feel? How does taste in your mouth.. thin? Watery? Could a person drink multiple of these and not get super drunk?

H: Could you do that?

C: OMG you can smell the hops.

R: Definitely flowery. You can taste the flowers.

H: What flower is it?

C: It kind of looks like the color of pee of someone who is super, super, super dehydrated, like to the point of death, probably.

R: There goes my trying to be healthy…

H: Rueben, did you drink it already? We were supposed to review it.

C: I would say it hoppy-ish. Not “super” hoppy, but like mid. Hoppy. Its lighter-ish. What do u think Reuben?

H: Well he already drank it, so I don’t think he remembers ?

R: It had a lingering head.

R: I would skip child support payments to purchase one of these beers.

R: Thick, spicy with a good amount of bitterness.

C: It’s definitely darker, there more spices in there than other beers we tried. Hoppy.

H: It kind of tastes like chocolate.. you know cocoa.

R: I’m in love with the coco, coco. You know that song?

R: Fantastic review, told me how terrible I am at identifying beers. Eye-opening to me. Maybe it’s just because I like all beers.