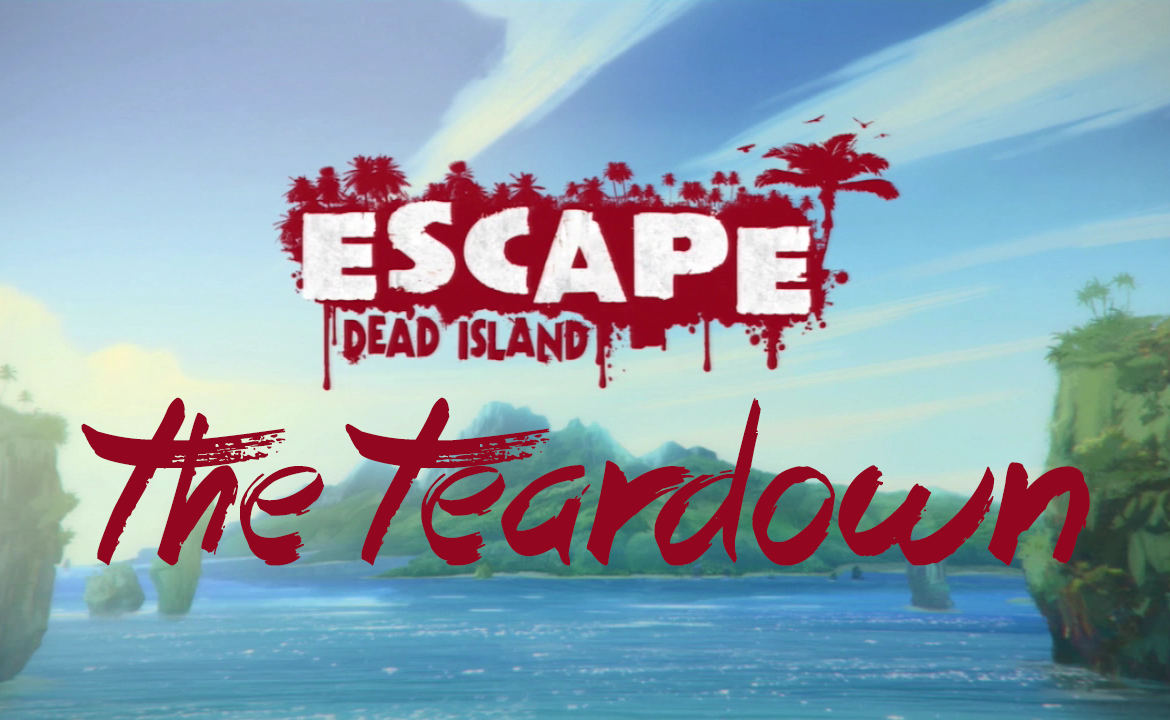 Platforms: PS3, Xbox 360, PC
Release Date: November 18, 2014
Average Score: 40, 32, 52
I didn’t think it would happen, on the first Teardown of 2015 no less, but a game for this column finally broke me. I didn’t finish Escape Dead Island. However, I didn’t need to endure the entirety of the game to come to the conclusion that Escape Dead Island is a massive runny puddle of lukewarm diarrhea. In other words, its long list of imperfections make it the perfect game for this piece.

Bottom-dwelling games, like Escape Dead Island, fall into the category of leechers, biting off its main franchise (Dead Island) without also grabbing the features that people liked about it. Escape doesn’t have any leveling mechanics, quest structure, four-player co-op, or a weapon-crafting system like Dead Island did. What it does have is… well, it really doesn’t have much of anything to actually do. You run to a place, grab a keycard, then run to another place. It’s like running useless errands, but these errands are for Hideki Tojo, and you’re also covered in giant, hairy spiders.

Now, go Google Hideki Tojo is so you can understand that joke.

Combat and stealth are a crap shoot filled with crappy shooting. Wonky aiming makes the all-important headshot a farfetched dream, while hitting a zombie with a bat is always a nightmare. Clubbing a pack of zombies never works, except when the game flips a coin and decides that it does. There’s no rhyme or reason;. Just some twisted glitches in the code that can only be lightly likened to “luck.” There are no pointers to give in combat because no strategy is consistently effective.

And that’s why it broke me. The extreme difficulty spikes didn’t come down to skill. It boiled down to how much I could run past the bullshit and pray that I could get away unscathed. The laggy controls can’t keep up with faster zombies near the end so, at a point, when pitted against a room of brain-dead flesh- eaters, I quit. I don’t hate myself that much to go through that.

But I did hate myself enough to play about 90 percent of the game. Even after all that time, I’ve been racking my brain to come up with a reason of why Escape Dead Island exists. It can’t be for profit. No one would buy a garbage fire this hot and… garbagey. It can’t be for its gameplay, of which it has none. And the gameplay that is there is either mindless, frustrating, or both. It can’t be for its looks because it makes vomit look like a Jackson Pollock painting. It can’t be for the story because, it doesn’t really have one, unless you count non-sequiturs and cringeworthy acting a story. If that counts as a story, then this is some Shakespeare ass shit.

Actually, it’s just ass shit that doesn’t deserve a second of your time or any more of my time. I apologize that you had to even think about this game and I apologize to myself for playing this wretched filth.