The Sound of Skating: Building Sustainability 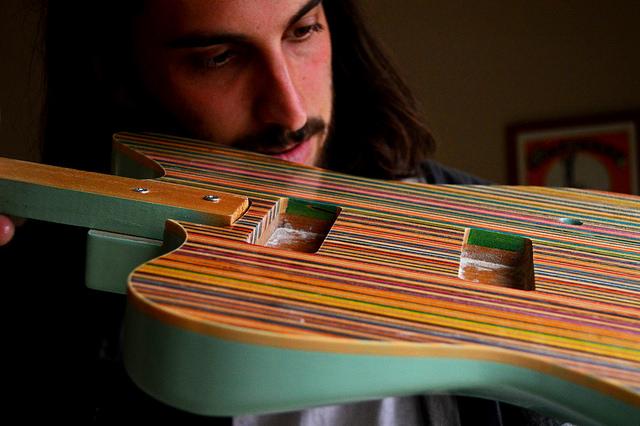 With a quick flick of a switch, Nick Pourfard has his work cut out for him. Literally. Pourfard is an industrial design student at SF State, woodworker, skateboarder, guitar player, and creator of the eco-friendly company Prisma Guitars.

Prisma Guitars is built on the foundation of sustainability, spontaneous inspirations, and a lot of hard work. Every guitar that Pourfard creates is made out of recycled and reclaimed wood from decommissioned skateboards. Each exquisitely handcrafted guitar is one-of-a-kind due to the various types of wood from multiple skateboards, which gives the body and neck of the guitar a unique and rare pattern every time. The sounds of these guitars share the same characteristics as their build. With their clean, sharp, and crisp tones, where you can hear every note strummed, one would think that a professional must have made them. But think again.

In 2011, Pourfard was injured while he was skating, an injury that put him on the bench for the next six months. He tore a tendon in his ankle. With one of his hobbies pushed to the sidelines, Pourfard needed a new one. He began to build.

Woodworking seemed to be the next good fit. He began watching YouTube videos on how to build small objects like dice, pens, and spoons. “I made small things,” said Pourfard, “but making a guitar seemed so technical and extreme to make, so I said to myself that there was no reason why I wouldn’t be able to do it.” Taking the skills he learned from creating smaller objects, Pourfard applied the same logic to building a guitar.

“I didn’t know a single thing about it, where to start, what to do, what tools I needed. I then watched a million videos on YouTube about every step on how to make a guitar start to finish. I would watch it like two times and be like ‘Okay let’s do it,’” said Pourfard.

Combining his early love for music and his rather rough start to skating, Pourfard managed to create a way in which he could combine both, as he likes to call them “skate guitars.”

A 13-year-old Pourfard was dared to “bomb” a hill on skateboard, for the first time, by a friend. Being a 13 year old, there was no way he would have resisted. While skating down the hill, Pourfard fell, on his face, and shattered all of his teeth.

“My retainer shattered in my mouth, that’s how hard I fell,” said Pourfard. But for “some reason” after that moment, following the repair of his teeth, Pourfard decided to keep on skating.

Guitar playing came on much easier than skating for Pourfard. His mother signed him up for lessons when he was in seventh grade. Although he ended those lessons in the beginning of high school, Pourfard never lost the inspiration and interest to play.

Back in 2011, while on bed-rest with a torn tendon, Pourfard was able to fully recover, and completely build his first guitar out of skateboard wood. Realizing that this concept was beneficial in an eco-friendly way, he continued building guitars well after his recovery. “It’s one thing that kept me going,” said Pourfard, referring to the socially responsible aspect of the company, “I started doing it because at first it was sentimental to me, and my second thought was that I’d throw these away anyway.”

Because used skateboards go through abundant wear and tear, they become obsolete after they are broken or worn down.

“These boards are totally broken and not useable, but I’m just finding a way to keep them going,” said Pourfard.

What continues to keep Pourfard going is the future and his accomplishments thus far, all which are powered by his inspiration. He is constantly thinking about what’s next with his work and the future of his company.

“My mind goes off track really easily and I think it’s because I’m thinking of a million things at the same time,” said Pourfard, “I get inspired by tiny things that are around me, and other things that people make.”

This inspiration has propelled Pourfard, and Prisma Guitars, to selling three of the 11 guitars he’s made, some even selling before he posted them online. One of the three he has sold was to the bassist of Iron Maiden, Steve Harris. With the substantial acceptance of his work by musicians like Harris, as well as his 3,000 and counting followers on Instagram, Pourfard plans to fully launch Prisma Guitars in the next two months.

If Pourfard can offer any advice to those struggling with ideas and projects themselves, it’s this: “In some situations the worst thing that can happen is that it doesn’t work, and who cares. You have to realize the reward in the end, and it’s worth it.”