The man behind The Simpsons, dead 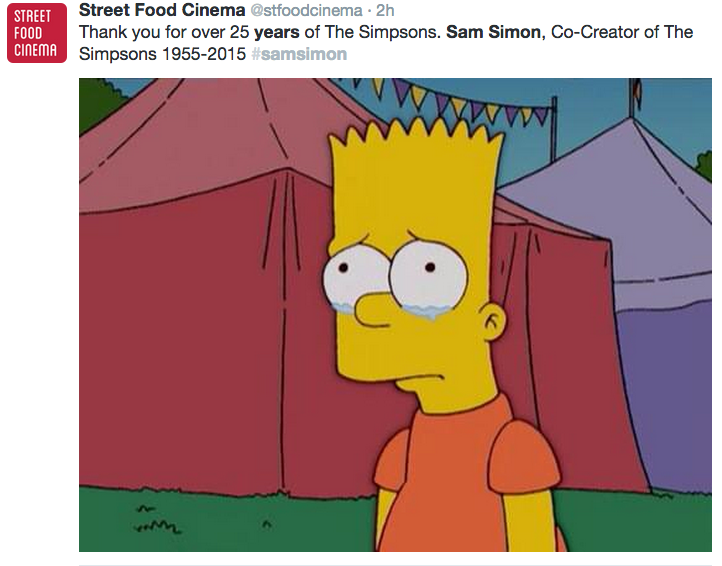 After a two-year long battle with cancer, that was said to end his life between three to six months after diagnosis, Simpsons executive producer Sam Simon has died at the age of 59.

Fans of the show and his work went on to express their condolences on Twitter, addressing him as an “animal hero” and recalling the laughter he brought to many through his comedic writings and art.

Introduced to the art world early on due to his mother’s art gallery in Venice, Calif., Simon frequently entertained contemporary artists like Andy Warhol and Ed Kienholz. He went on to draw cartoons for his school paper during his time at Beverly Hills High School and won superlative awards including “Most Humorous” and “Most Talented.” While at Stanford University, completing a degree in Psychology, Simon’s first job consisted of creating sports cartoons for the San Francisco Examiner, San Francisco Chronicle, and the Palo Alto Times.

Simon’s most influential and praised work appeared in the 1989 premier of The Simpsons on Fox network. The self-taught artist is credited for co-creating the longest running animated show in the history of television, even after leaving The Simpsons after four seasons in 1993. Today, Simon is still credited as executive producer and the winner of six prime-time Emmys for his work in the series. In 1999, the show was crowned as the best TV series of the 20th century by Time.

The easily identifiable yellow characters have appeared on screen for more than 500 episodes and have graced us in the form of video games, clothes, and theme park attractions. For fans, The Simpsons family is an extension of their own family. The show provided many with with 22-24 minutes of uninterrupted laughter and intellectual recaps of current events in the evenings for the majority of their lives and still continues to do so.

The saddened statement of his death was announced today by The Sam Simon Foundation, a foundation he started in 2002 that rescues dogs from Los Angeles kill shelters and in turn trains them to be service dogs. Toward the latter of his life Simon’s fortune was distributed to charitable causes including a mobile veterinary clinic, a vegan food bank, and Save the Children, an organization that promotes children’s rights.

TMZ reported Simon died alongside his family and dog, but his legacy as a humanitarian and comedic genius will live on forever.