What if Monsters Were Real? 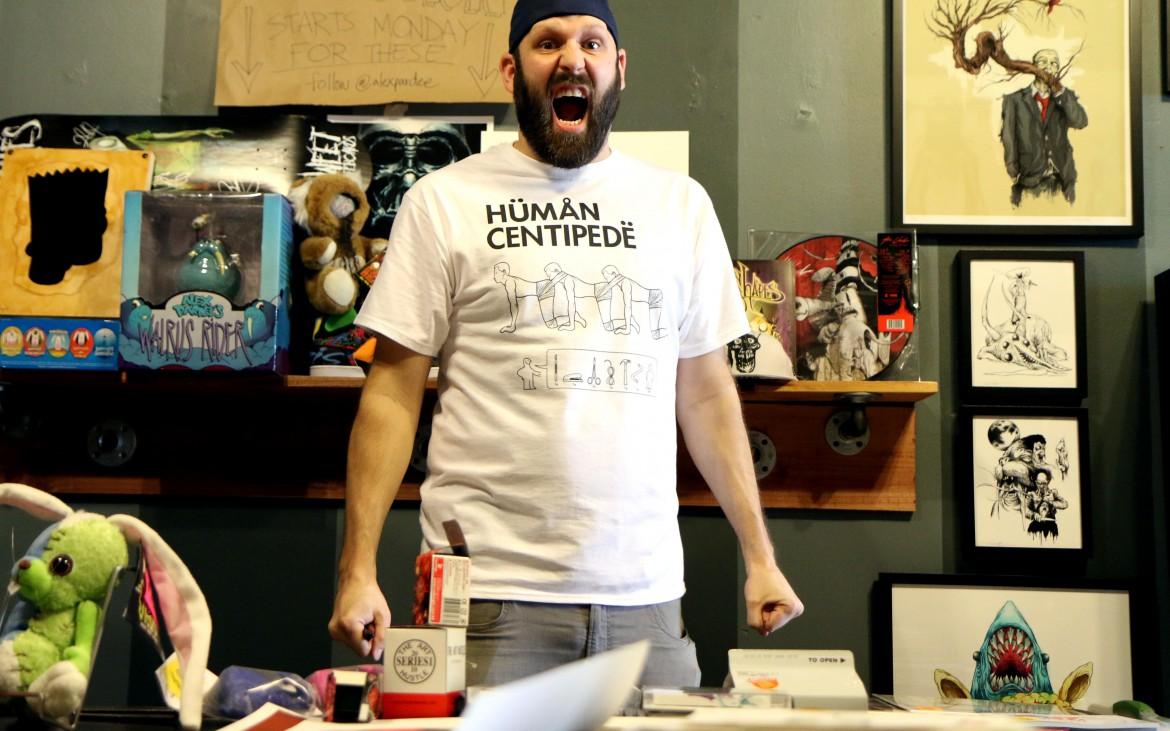 Fear is a black pit, and some dive headfirst.

For some, there is comfort in facing the horror and darkness of life. It’s better to acknowledge the fear and discomfort of situations than to pretend there’s nothing wrong.

When viewing local artist Alex Pardee’s drawings, there is a sense that something is wrong- horribly wrong. Creatures with sharp, elongated teeth and bodies create discomfort in the viewer. But often, onlookers are unable to look away. Maybe because the horrific drawings are simply creepy: skeletons with bones that melt, bodies whose mouths remain permanently twisted and cracked.

But probably a deeper reason the artist garnered so many fans is because the horror that lives inside his drawings resonates with people. Everyone has been trapped by their own bad thoughts and feelings at one point.

“I think the darkness is part of what I love about it,”said Claudia Graham, 20, a San Francisco resident and fan of Pardee’s art. “His work actually inspired me greatly in multiple ways at very difficult times in my life.”

Pardee was diagnosed with anxiety disorder and depression at the age of 14. His short stay in a mental hospital gave him an intimate view of what it’s like to feel tortured. He began to transfer his anxiety and depression onto paper. His upsetting thoughts and feelings were transformed into sharp-toothed creatures with “bodies” that dripped off the page. He began drawing creatures with oversized jaws and twisted lips. Beings with sagging, dripping cheeks and bulging eyes.

“I’m really compelled by the way his artwork is vibrant yet creepy and even sometimes a little vulgar,” Graham said. “I love the way he brings his creatures to life and that he even wrote stories to go along with some of them.”

Pardee has drawn in this genre of horror art for 24 years now. Beginning with designing T-shirts, the illustrator moved on to writing comics, and eventually became the art director for hardcore band The Used. Pardee’s career took a whole new turn in the early 2000s, when he created the character “Chadam,” who starred in a self-titled 3-D, animated episodic movie for Warner Bros.

Shortly after, he created art and set work for movie Sucker Punch. His prints brought the viewer into a fantasyland of ass-whooping, evil, beautiful women with large guns and swords.

Zero Friends, his store/gallery at 419 Haight Street features shirts, posters, and prints of his demented art.

Pardee collaborates with other stores in the area for fairs and special events. He is partnered with  Upper Playground, a clothing store in Haight known for its clean-looking beanies, sweat-wear, and backpacks.

But the business side of things is only so interesting to the illustrator, who has a tough time remaining stagnant for any length of time.   Recently, Pardee helped create a mockumentary- style horror film that incorporates his twisted creatures. In the film Digging up the Marrow, fans are able to see a real-life version of the creepy figures, in a plot that seeks to prove that monsters do exist.

Pardee is a true believer in the world of horror.

“I think monsters exist somewhere we can’t see,” he said in the films introduction. “When we do find monsters, I just want to be there to be like ‘I told you so.’”

Digging up the Marrow will resonate if you’re someone whose ever sought out adventure or searched for thrill.

But it is not meant to comfort you. The film will scare you with terrible demons who are entirely real, and they do not remain in the dark for very long – they will seek you.

Fans are able to see Pardee’s 2-D monsters in a weird, new way.

“I always wondered what they look like,” said Alejandro Mendoza, a fan who attended the Berkeley screening of the film in February. “It was great. I’ve always loved dark things It was like a whole other world.” But, as always in Pardee’s work, there is beauty in this darkness. The horrific journey is mostly scary, not because of the monsters with sharp teeth and gaping holes for eyes. The film is terribly chilling because it proves what the viewer knew all along. Monsters are real, no matter what they look like. And they are waiting, hands shaking, jaws unhinged.