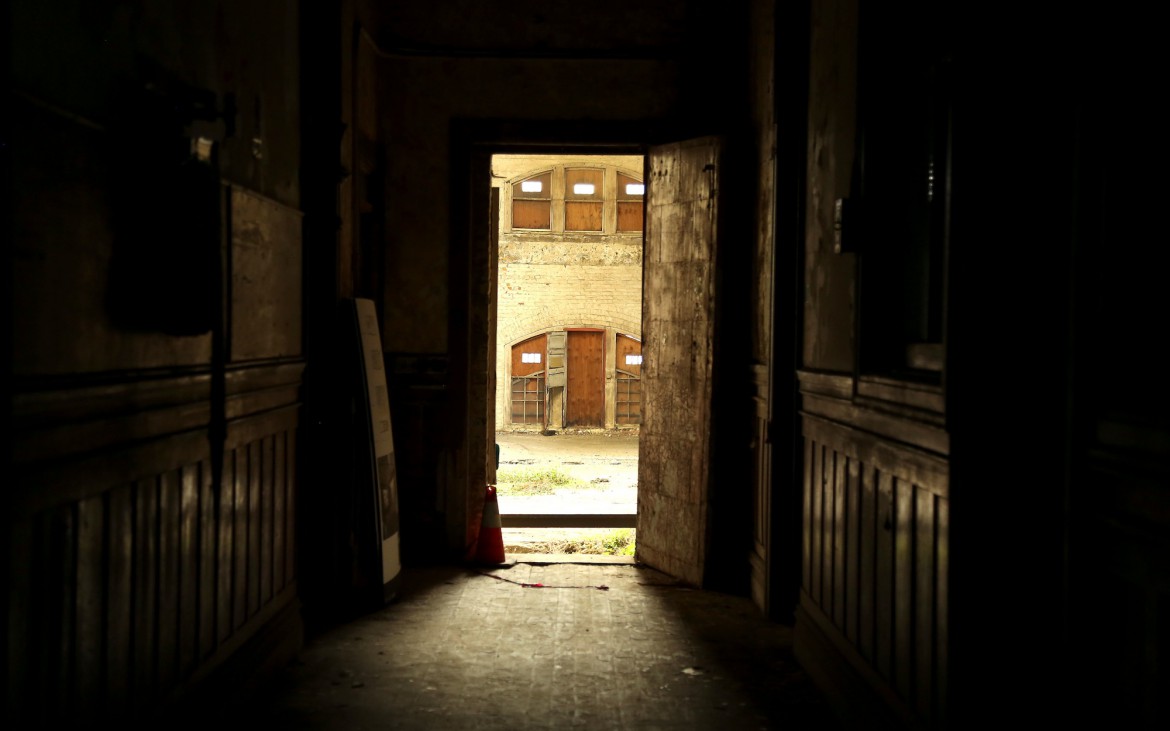 The hallway leading to the entrance of the Powerhouse at the Geneva Car Barn on Thursday Feb 5, 2015. Photo by: Emma Chiang

On the corner of San Jose and Geneva Avenues, there sits an old building. 18 window panes are boarded up with two shades of light blue painted plywood on the side facing a Muni Metro platform. It’s right on the line in between the Excelsior and Ingleside districts, and on the edge of Balboa Park BART Station, but as the M-train comes from around the corner of the building, the prospective passengers pay no mind – they just want to get on Muni and get on with their day.

But the inside, which rarely gets fresh eyes on it, shows the history of generations. Wooden wainscoting lines the walls of what used to be the Geneva Office Building; a wooden dresser occupies every room that used to, and in some cases still does, hold a desk and chair; some rooms still have old machines, which few would now recognize as computers. Little transit windows, like those you see in old black and white films with train stations, line the hallway into the western wing of the building. The smell inside the powerhouse portion of the building is a mixture of musty and fresh, as vegetation pops its way out of the concrete flooring. The natural light shoots in from the skylights above and illuminates the partial ruins of an interior. You can only imagine the beauty the enormous room once held as it stood in its prime as an industrial masterpiece of its time.

The only thing seemingly new about this building are the three huge advertisements that have appeared on the exterior walls in the last few months. These ads, stating “envision” at the bottom with something clever and simple after them, perfectly juxtapose the old and the new brought together at the Geneva Car Barn and Powerhouse – and this is just the beginning to what the Friends of the Geneva Car Barn and Powerhouse want to do.

“Imagine a street scape with trees,” says Tim Wirth, Executive Director of the Friends of the Geneva Powerhouse. “Imagine a pedestrian friendly experience around the biggest transport station outside of the downtown area.”

“There’s an amazing vision planned,” explains Wirth. “There is strong commitment at the neighborhood level. We now have our agreement with the city nailed down which means that’s it’s not just an idea.

The nonprofit is trying to make it so the 114-year-old building becomes less of a transit hub and more of a destination. Plans for the building include a restaurant/cafe, a student lounge, a 99-seat black-box theatre, a culinary arts studio, and a huge open hall within the current powerhouse portion of the building, which may be used for a variety of occasions/events, and will have a full kitchen attached.

“Can you imagine a wedding in here?” says Wirth, referring to the high-ceiling powerhouse. “Without all of those windows bordered up, the lighting would be incredible.”

The building has been unused for more than 25 years now as it was damaged in the Loma Prieta earthquake in October of 1989. The San Francisco Municipal Transit Agency (SFMTA) had plans demolish it, but Mayor Willie Brown petitioned for the building to stay put. Once ownership was moved to San Francisco Department of Recreation and Parks (SFDRP), restoring the old building became goal that has been trying to be achieved since 2004.

“The fact that it’s sat vacant for the past 25 years, in my opinion, is a bit disgraceful,” says Wirth. “But there are a lot of reasons for that – it’s big, it’s complicated, it’s expensive but we’re going to try and change that.”

Through community programs and classes have been run outside of the powerhouse under the nonprofit’s name in years past, the most visible headway has been recently. In 2012, the building received historic building status, and last year, was officially recognized by the city.

“This is a project that in most any other neighborhood would have been snapped up long ago and fixed and repurposed and doing what it should be doing – serving the public,” says Wirth.

“The city has studied it and called out the car barn as kind of an anchor to the renewal of this neighborhood,” he says.

The building itself has a history that is hard to contest. Designed by the Reid Brothers, the same architects who built the original Cliff House, which watches over the northern end of Ocean Beach, the Geneva Car Barn and Powerhouse definitely has architectural merit.

On top of its history, Balboa BART Station is also the busiest transport station outside of the downtown area and sees a constant flow of people, and it always has been. Being built in 1901, the station served as the first electric train station in the City. If you wanted a train ticket or pass, you could go into the office side of the building and buy your ticket at the train window. There was even a special funeral car that would go directly from the station to Colma.

“I think the project itself is beneficial for the community,” says Michael Cruz, cinema major at SF State who lives in the neighborhood. “The project itself is fair and I can’t think of a counter argument against it. Hopefully construction does not slow down the M [train].”

The current cost of renovating the building and making it ready to open is $23.9 million.

As of now the city has approved $838,000 for design and development. As part of that approval, the Friends of the Geneva Car Barn has agreed to raise an additional $500,000 to pay for construction documents to have the full plan so they could and can understand exactly what everything will cost. So far, $50,000 has been raised from a challenge grant.

“There’s an amazing vision planned,” says Wirth. “There is strong commitment at the neighborhood level. We now have our agreement with the city nailed down which means that’s it’s not just an idea,” he says.

This agreement also includes a 55-year ground lease. According to the Lease Disposition and Development Agreement (LDDA), the $500,000 has to be raised by the end of 2017. Once the initial money has been raised, tax credits are expected to be the next form of funding for the historic building.

The blueprints created for the project were created pro bono by Aidlin Darling Designs – a local architectural firm that has since been recognized and received the National Design Award.

The advertisements that live on the exterior walls of the house and promotional videos that populate the nonprofit’s website have also been done pro bono in the last few months by Godfrey Q and Partners.

“It’s about the arts,” explains Wirth. “This brings stability in a way that a lot of places won’t have. It’s about cultural diversity, talk about that and I think that’s a San Francisco value that people celebrate. If you celebrate it, invest in the areas where that exists in a real way,” he says.

With low-income housing planned to take over the current Muni parking lot right across the street, the mission of the Friends of the Geneva Car Barn stands truer than ever – “the future of the neighborhood starts here.”