Put a Lid On It

xpressmagazine
By Liz Ireland
Photos by Gregory Moreno
On a bright Sunday across the bay in Oakland, James Frank’s kitchen slowly fills with the sweet smell of boiling grape juice and sugar. The sunlight that streams in through an open window, adding to the aromatic heat wafting through the small, open kitchen. As the grape mixture begins to boil and thicken, Frank lines up three long rows of small, sterilized mason jars. He fits a well worn metal funnel over the top of the first jar to begin the end of a process that will keep his fruit fresh and tasty for at least a year.
“It’s an annual ritual,” explains Frank, a tall, well-built man in his late thirties with a thick brown beard. “If I don’t do it once a year I get really bummed out and I miss it.”  The now filled, capped, and sealed mason jars start to cool, the ritual Frank talks about is the preservation process of jamming, canning and pickling.
Every year Frank and his wife, Jessica, gather fresh fruits, around the beginning of fall, and go through the age old process of canning. It not only preserves delicious flavors for the months to come, but for over a year after the first can date. By combining heat, food, and sealed bottles, Frank and Jessica carry on a method that dates all the way back to the 1790s.
Canning initially came into being when the infamous French Emperor Napoleon offered a cash prize to the first person who could figure out a way for food to be kept fresh, healthy, and tasty for long periods of time. Enter chef Nicholas Appert. Fueled by the promise of money and influenced by corked wine, Appert experimented for about fifteen years before he finally found that by sealing food in jars and boiling the entire thing he could preserve fruits, vegetables, juices, soups, jellies, syrups and even dairy products. It was not until 1810 that his findings were published and put to use. Since then, the canning process has developed considerably.
Now, canned foods are most commonly associated with soups, jams, jellies, and other grocery aisle staples. The products mostly stocked by these retailers are in metal cans and filled with preservatives. As Frank places the sealed jars into cardboard boxes for safe keeping, he explains that one of the best things about canning fruits, vegetables and soups yourself is knowing what exactly goes into your food.
The process of canning is once again gaining popularity in centers for urban sustainability.  Along with knitting and sewing, canning is becoming increasingly popular for people who not only want to know what is going into the food they eat, but also take pride in making things themselves.
DIY culture is a non-mainstream movement that has gained considerable momentum over the past few decades in underground subcultures. It is a term that could mean anything and everything from grassroots political campaigns to fermenting kombucha on a kitchen counter top or even knitting a scarf.
The philosophy behind DIY is summed up nicely by MAKE Magazine editor Mark Frauenfelder to The Huffington Post: “Our daily survival depends on seemingly magical gizmos that provide our food, water, clothing, comfort, transport, education, well-being, and amusement. But you can make your world a little less confounding by sewing your own clothes, raising chickens, growing vegetables, teaching your children, and doing other activities that put you in touch with the process of life.”
Oftentimes DIY-ers create a community around their passions and hobbies, they establish bonds with others through craft and create a homegrown tie to their local community. DIY attempts to take people away from consumer tendencies and put them in the mind frame and lifestyle of creation and sustainability.
“Ultimately, what we need to be creating is a cultural shift,” explains Wigg party leader Morgan Fitzgibbons.  “Soon there will be an event that will cause people to spring into action. We need to start preparing for that.” One of the many preparations he is referencing is canning.
The Wigg Party is a community-building group led by Fitzgibbons. It operates within San Francisco’s Alamo Square district and organizes various events and classes that focus on green movements within an urban environment. The Wigg Party’s main belief is that by changing one city, a community at a time, they will eventually change the world. Leaders look to classes such as bike repair and at-home canning as a way to spread the word and practice of DIY culture.

“We need to develop skills that our grandparents and our great-grandparents possessed,” Fitzgibbons goes on to say. “Things like sewing, cooking, and canning.” 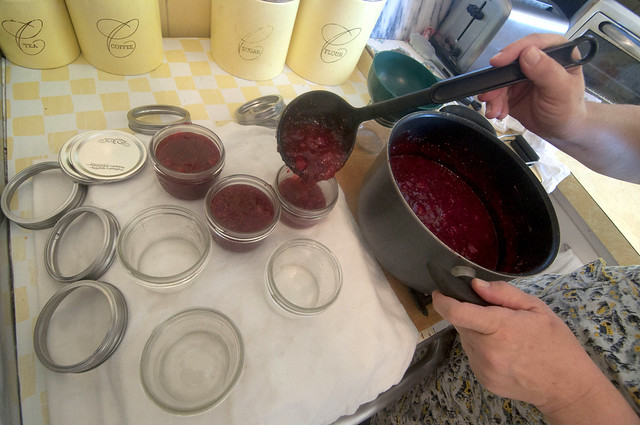 While the lost art of canning may not be at the top of most people’s “to learn” list, it is a practice that is rising in urban sustainability movements. Fitzgibbons is also quick to echo Frank’s point—when people jar food themselves they are able to bypass any sort of unnatural preservatives and know exactly what is going onto their plates and into their bellies.

Frank, a Supervising Nationalist with the East Bay Regional Park District, has always had a close relationship with his food. Not only does he can his own jam, he ferments his own kombucha and puts it on tap, ferments apple cider, presses apples and works with friends to distill his own liquors. And since the age of seven, Frank has been taking cues from his family. Most of his first experiences with food cultivation were on his grandmother’s farm on the East Coast. Frank explains that the grape jelly he is making today was originally his mother’s recipe – she would make ten cases every year and give most of it away.
“It’s been a part of my upbringing, it’s been ingrained into me,” says Frank, as he surveys the tools used for the day’s jelly yield.
The tools needed for a small jelly batch are simple. For the day’s batch, Frank uses a large stew pot, a fruit press, strainer, metal mixing bowl, cheese cloth, ladle, tongs (or a jar lifter), funnel, and measuring cups. Frank also admitted that for those so inclined, the fruit press could be substituted with a wine bottle. The ingredients are about as simple as the tools, three pounds of grapes, fourteen cups of sugar and pectin, either powder or jellied.
Frank starts by weighing and washing the grapes. He then takes small handfuls of the fruit, puts them into the heated soup pot and begins the mashing process.
“You want to start in small batches,” Frank explains as he crushes the grapes. After a few minutes of mashing, the three pounds of grapes are reduced to a pulpy, sweet-smelling mess. Next, Frank transfers the whole thing into a strainer lined with cheesecloth. Then he takes careful steps in squeezing the juice from the grapes. Once the juice has been carefully extracted, Frank pours the juice back into the soup pot. He says that the juice has to come to a rolling boil before anything can be done with it.
Once the boiling happens, Frank measures fourteen cups of sugar into the grape mess. The next step is better done with two hands, one to dump the pectin, the other to stir. As Frank stirs in the gelatinous pectin, the fragrant, purple mixture begins to thicken and his stirring becomes less rigorous.
As the mixture begins to calm and thicken, Frank skims layers of bubbles off the surface, and the real canning is ready to begin. He places a well-used metal funnel over the top of the first sterilized mason jar and ladles in enough warm jelly to fill the can. The tongs remove the threaded lid and place the canning ring on top of the jar, sealing the whole thing with a quick flick of the wrist. Frank repeats this process until most of the jars are filled and the pot empty. With that easy process, Frank and his wife are able to enjoy the fruits of their labor for the year to come. Frank says anyone can do it and the cans also make great last minute gifts.
“It’s not that much harder than making a pot of soup,” explains INNAjam mastermind Dafna Kory. “It’s really simple and it gives you an appreciation of what it takes to get to the final product.”
Kory was able to turn her jam hobby into a successful jam business. While Frank was taught canning and jamming from his family, there are a variety of outlets from which anyone can easily learn. Kory explains she started online.
“I taught myself, the Internet is a wealth of knowledge. I got a recipe online and went to the store. Jam is one of the easiest things you can make,” she says.
For those not impressed by internet tutorials, Leena Trivedi-Grenier of LeenaEats recommends the traditional book format.
“There’s a lot of disinformation on the net,” says Trivedi-Grenier. “It’s important to start off with a published book. The Complete Book of Small Batch Preserving is the first book I ever used. It’s really good because it allows you to make small batches, not everyone has thirty quarts of fruit at home.”
Though it may seem archaic, intimidating or time consuming, canning, jamming, and pickling, the outcome is worth the effort. In the end, the only difference between the can in your hands and the one on the shelf is the lack of preservatives and richness of flavor.
Delete Image
Align Left
Align Center
Align Right
Align Left
Align Center
Delete Heading