Staying in the freedom zone

A thick scattered group of clouds race the Monday commuters home for a hot dinner, diving over one another in clusters that intertwine in delicate yet aggressive patterns. Nobody enjoys the first day of the workweek, and any interference with its commencement snowballs from mildly inconvenient to Guantanamo scaled torture. Now, Bay Area nine-to-fivers must deal with BART service disruptions each and every one of these horrific days.
“I get it, they made their point, but I didn’t shoot anybody and I just wanna get home,” the perfectly styled petite Jamie Arias huffs from her Market Street store Juicy Couture. She lives in Antioch and after working a full shift she returns home to a husband and two daughters who rely on her “to handle all the Mom stuff,” like prepping dinner or balancing the family budget. “And I certainly can’t leave my husband in the kitchen unattended,” she mouths with glossy rose lips and sarcasm in equal shades of hot pink.
When Charles Hill was shot on July 3, 2011 the BART police immediately evacuated all civilians from the area, according to witness Alexander Monsanto. “I heard the shot but I didn’t notice any yelling or struggle before that,” he recalls the sound ripping through the static of the bustling UN Plaza just as the bullet ripped through Charles Hill’s vital organs.
Security footage later shows the officer emerging from a BART train and taking less than one minute to remove his gun from the holster. It was only six more seconds before he opened fire on Charles Hill.
Chief of Police Kenton Rainey would later comment he was completely satisfied with officers’ responses.
“There were people screaming, and running, and nobody knew what had really happened but it went from zero to chaos just like that,” says Monsanto, his full lips part enough to reveal his teeth as his eyes scan to and fro while he replays the scene in his head.
A press conference the following day attempts to relay the events. Chief of Police Kenton Rainey explains that they were responding to complaints of a drunk man with an open container on the platform. The officers who arrived first acted to the best of their abilities, according to Chief of Police Rainey. They were placed on administrative leave until a psychologist could properly evaluate them. Rainey brushes over exact details between the officers and Charles Hill, only that Hill was armed with a bottle and a knife. He explains that because of the open investigation he cannot say anything specific. An open investigation by BART’s own criminal division, coupled with an investigation by SFPD.

On July 11 the people responded by taking to the streets. People enter into the stations, behind the fare gates and chant to disband BART police. One person even jumps on top of a BART train to keep it from departing the platform. They hold open train doors so they wont be able to depart, and clog the platform so customers cannot board. YouTube video shows frantic personnel trying to handle the situation, but to no avail.
The horde of people not only takes over trains, they take over the streets. People walk in the center of Market Street during rush hour, slowing traffic and potentially harming themselves. Some approach police officers shouting obscenities. They chant in loud echoes reverberating through buildings of commerce, “you can’t shoot us all!”
This delays the evening commute which, according to a BART press release, delayed ninety six trains “putting at risk the safety of thousands of passengers and BART employees.”
On July 12, BART holds a meeting to review their police department. Members of the public are present to make comments to the committee comprised of BART directors. One man asks about gun training BART officers receive, citing previous incidents of unnecessary violence. Annette Sweet, a member of BART’s board of directors, explains that BART police now undergo an additional sixteen hours of training every year and Rainey explains they must qualify at a gun range every two months.
BART officials fail to cite non-violent training or civilian training, only a gun proficiency screening.
Krystof Lopaur of No Justice No BART takes the mic. Lopaur has advocated to disband BART police prior to this incident and the board knows him well. He demands to hear how a transit agency manages a police force and what kind of management training they have undergone. The answer is none. Although, board members did undergo training to shoot.

Lopaur also points out that while protesters and personnel alike were outside the safety areas of train platforms, BART continued to run trains through stations without stopping at top speeds, “putting at risk the safety of thousands of passengers and BART employees.”
Lopaur’s message is simple, disband the BART police because a transit agency does not have the training to handle a police force, as demonstrated by these casualties. He warns that if nothing is done, things will not quiet down.
In mid August rumours of another protest began circulating. The threats claim people would take to the streets with more force and bigger disruptions. They threatened they will be larger than the incident on July 11, and warn BART to prepare for them. And prepare they did.
BART, in a press release on their site maintained safety as their ultimate goal. “A civil disturbance during commute times at busy downtown San Francisco stations could lead to platform overcrowding and unsafe conditions for BART customers, employees and demonstrators. BART temporarily interrupted service at select BART stations as one of many tactics to ensure the safety of everyone on the platform.” As emails obtained through the Freedom of Informations Act points out, BART took action prior to imminent threats of danger on the platform. Officials acted several hours before any sort of “unsafe conditions for BART customers” were underway.
The largest organizational tool, much like in the Arab Spring, continues to be social media. The people garnish this technological tool to organize and gain solidarity across the Bay Area and to stand up for the minority class.
Dirk Peters contacts BART business partner Forza Telecom and Wifi Rail Inc. to eliminate cell phone and internet service on August 11 from 4pm to 8pm, according to emails. Peter’s emails were sent at 8:45 am, well before any disruptions. When the anticipated hour arrived, the BART was empty of any protesters and merely disconnected commuters.
BART had also planned its own press conference and what has been called publicity stunt to shuttle customers to and from a press conference intended to sway public opinion of the transit agency according to emails obtained by The Bay Citizen. Linton Johnston orchestrated the ordeal and even prepared a script for “loyal customers” to read at the conference which read among other things, that their life felt as risk. Only one rider attended.

As Chris Battle writes for the blog Security Debrief, “whatever action BART did take should have dealt with the actual protest and not with the lines of communications used to organize it. Law enforcement must become more intelligent in its reaction to social media. And that’s what it is, reaction.” Battle writes about security and politics of Homeland Security and a partner in leading Homeland Security strategic communication practices. “What law enforcement really needs to do is proactively educate itself on social media and learn to use it to its advantage in a positive way.”
Al Jazeera points out that because the BART tunnels would not have Wi-Fi or cell phone service. The technology services are merely a luxury provided to customers, putting the policy in a legal gray area. Linton Johnson, BART’s communication representative, cited a 1969 Supreme Court ruling as justification.
After the cell shut down people struck back harder than ever. Demonstrators cover their faces and march from the Embarcadero up Market Street. They are many, and their voices demand justice for the seven lives BART police have claimed since the 1970s.
“They say they’re here to protect and serve us, but BART police just make me nervous!” the mass of masked men and women chant. Many are wearing faux blood stained shirts in honor of the blood shed by the victims. 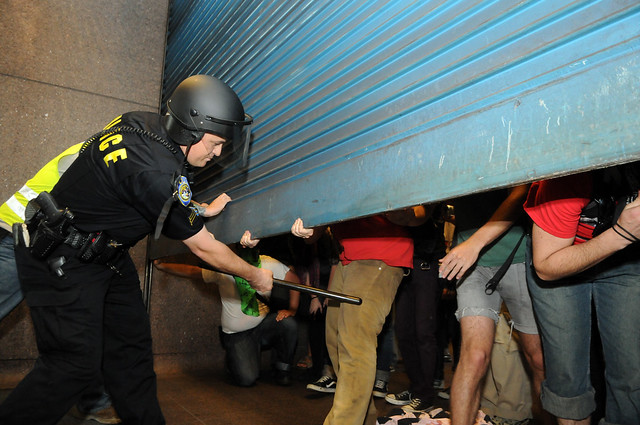 “We are all Oscar Grant! We are all Charles Hill!” they cry as signs demanding justice for the deceased thrust towards the sky. Their message is clear, they want BART police to disarm and disband before more lives are claimed.
“I wonder why they didn’t shoot for his arm or his legs,” writes Hill’s physician, Dr. Rupa Marya, in a letter published by the Bay Guardian. She only remembers Hill as a pleasant person suffering from substance abuse.
Krystof Lapour maintains this has to do with an underlying class war that is inherent in the BART police model. Because they are serving paying customers, they set up clear boundaries for whom they will ultimately protect and serve. This class war was left out of the media, who framed the story much differently than BART surveillance and witnesses remember it.
Many news corporations framed the scene as a violent drunken homeless man advancing toward police armed with knives.
While somewhat accurate, Hill having often been at some level of intoxication and also having knives on his person, witnesses recall him holding an unbroken bottle but not necessarily wielding it at the officers. One witness, Melyssa Jo Kelly says she heard nothing from officers before they opened fire. She only heard the three shots on the platform. “It can happen to any of us, so if we don’t look after the people who don’t have power ultimately it could affect the safety for us all,” she concludes in an interview with Josh Wolfe. 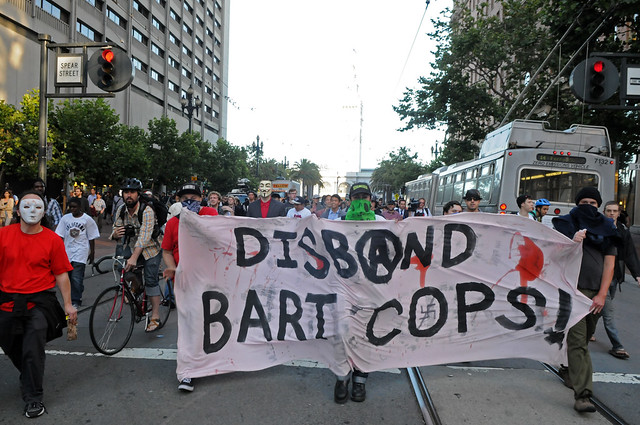 “What if this was your son?” calls Native American leader and No Justice No Bart Activist Running Horse. He urges the BART riders to think about the very real dangers of a police force serving only those who pay. While Charles Hill was a transient and lived in the outskirts of society, Oscar Grant was different.
On January 1, 2009 while revelers brought in the New Year with champagne and song, an altercation broke out between BART police officers and a group of young minority men at the Fruitvale Station in Oakland. Shaky cell phone videos from YouTube show four men sitting and cooperating with officers while observers yell, “fuck the police!” The officers are standing over the men and approach with force. As one man begins to rise to his feet, an officer restrains and kicks him back into line with the group.
“There are disproportionate minority arrests within BART, while only 8-12 percent of riders are black, African Americans make up 60 percent of all arrests made,” explains Lopaur of No Justice No BART. He claims the BART police epitomize a class war. 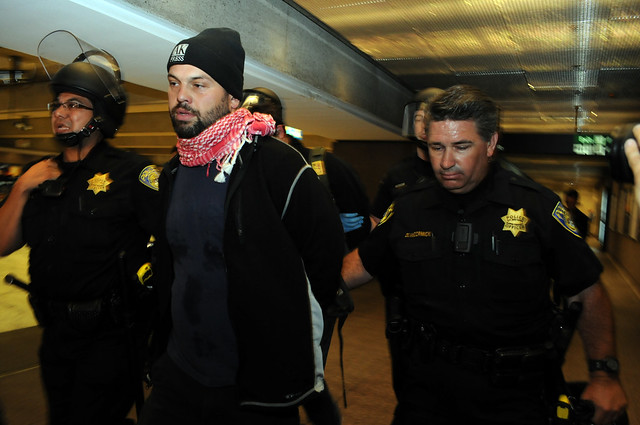 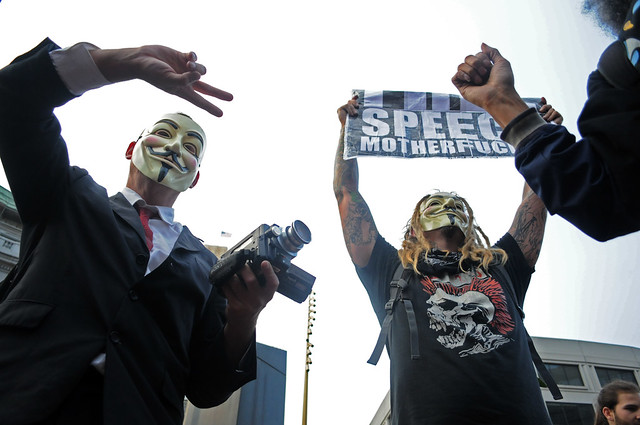