SF State students gogo dance their way to a degree

xpressmagazine
By Lina Abascal
Photos by Elijah Nouvelage
It is Wednesday night, and it isn’t school, boy troubles, or a long day at work that’s stressing out SF State students Ally Forrest, Noella Haverkamp, and their friend Brigitte Bakr. As the ladies frantically throw booty shorts, fishnet tights and bras around a cramped dressing room, they experience the ultimate go-go girl problem: what to wear.

The four-girl troupe calls themselves the Pop Rockettes, after their employers and the event they dance for: Electro Pop Rocks (EPR). The group performs every Wednesday night, and when they are booked for outside events. When the lights dim after the opening set, two girls strut to either side of the DJ booth in six-inch contemporary versions of the 1960s go-go boots called “stacks.”

“We get really, really sweaty,” admits Forrest, the longest standing member and leader of the Pop Rockettes. The girls’ break time is usually spent guzzling water and reapplying bronzer to their stomachs and chests, to create the illusion of abs and bigger cleavage with contours and shading —as if wearing three bras on top of each other wasn’t enough.

Forrest, an SF State sophomore from San Mateo, has a rotating hair color palette, multiple facial piercings, and at least three visible tattoos. Despite her alternative appearance, when Forrest enters the dressing room she looks like any other SF State student: dressed in shorts and a t-shirt, with faded henna tattoos on her pale skin. 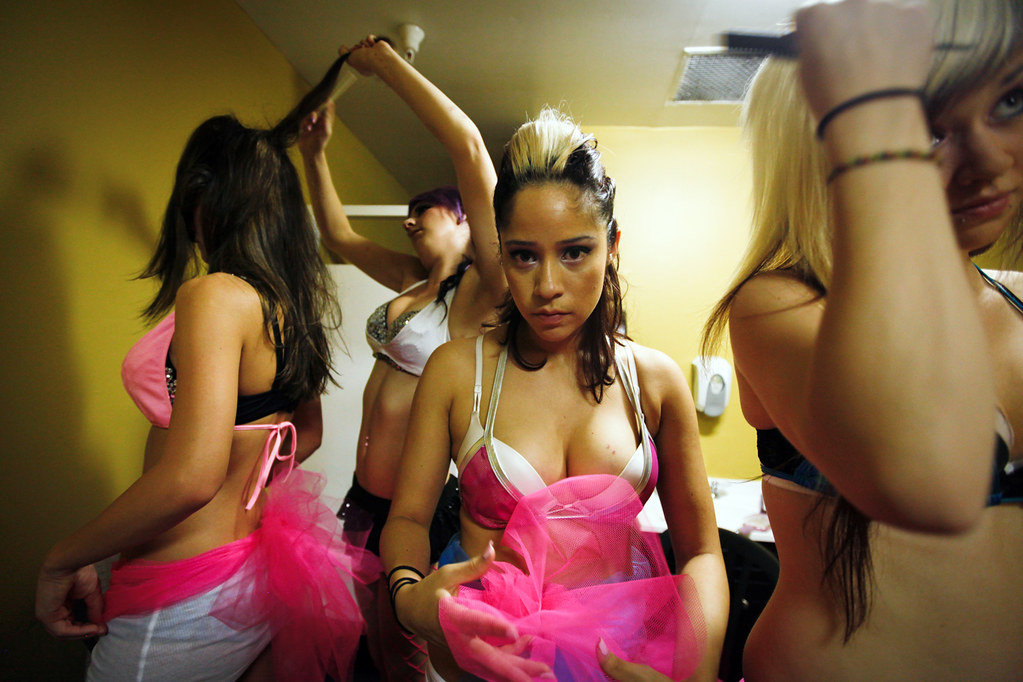 Two hours before they begin, she hones the girls’ energy onto this night’s outfits, which are constructed out of pieces worn for a previous performance. Embarrassed, Forrest explains the troupe usually has unique outfits for each performance, but EPR is a weekly event, and it gets pricey.

Despite this, the group is under pressure to defend the club that’s given them the opportunity to dance for over a year. Forrest claims EPR helps the girls out with funding their outfits.

“I keep my receipts and they reimburse me,” she explains.

While pinning her hair up, Haverkamp interjects, disagreeing with Forrest’s defense over costume costs.

“They pay for some things, but not for everything,” Haverkamp says, noting that they have to supply their own boots – which run for about one hundred dollars.

When not go-go dancing, Haverkamp works as a sales associate at Hot Topic in her hometown of Foster City, though she considers dancing to be just as much of a job.

“Sometimes the extra money I put into go-go dancing bothers me, but at the same time it’s me choosing to invest in my dancing career,” Haverkamp says of purchasing things like boots, shorts and bras with her own money.

The girls agree that the event does not pay for most items because some are expensive and others could be used for everyday outfits.

“It would definitely be nice,” Haverkamp says as she imagines if all outfit expenses were covered. “But I wouldn’t expect it.”

Bakr, Forrest, and Haverkamp won’t confirm the amount they get paid for Wednesday’s event, but Forrest says the girls no longer dance at any event for free.

“We’re at the point where we don’t need to dance for free,” she says. “It doesn’t benefit us and we want to be professional.”

The Pop Rockettes used to dance at TORQ, a monthly event held at destination club Ruby Skye for an eighteen-and-over crowd. They have since given up the gig for undisclosed reasons.

The topic is uncomfortable, leaving some of the girls laughing while others struggle to figure out an eloquent way to explain the situation. They occupy themselves by continuing to put together outfits in an attempt to appear busy.

“They have other dancers working there now,” says Forrest, who explains that a current Pop Rockette took the job—but as a group, the troupe are no longer affiliated in any way.

Located at 715 Harrison Street, EPR claims to be the largest electronic weekly event in North America. The crowd is generally between eighteen and twenty years old, and draws college-aged commuters from cities all over the Bay Area. The space also attracts a mix of inexperienced club-virgins, gangster guys with fitted caps, and rave girls in imitation go-go outfits. Patrons attend the event religiously, creating at least an hour long line for entry. Over the past year, admission prices have risen to fifteen dollars a night. Many of the event’s regular attendees are fans of the Pop Rockettes. Many have favorite members while some pursue friendships and maybe more with them.

“I made a second Facebook,” explains Forrest of her solution to random EPR club goers finding her. “I have one with my first and middle name, and then one with my nick name and last name. Anyone who knows me as Ally is probably my real friend.”

Rather than making a fan page, Forrest opted for making a second profile, citing that fan pages are for “actual celebrities.” Other members of the Pop Rockettes recognize the possible positives of having fan accounts, but so far have created one page for the group rather than personal pages. None of the girls say they have any actual stalkers, but the group giggles when the subject is brought up.

“I always want to be friendly, but there’s a fine line between ‘friendly’ and ‘too friendly,’” says Bakr regarding any male fans that approach her when she’s not dancing. “I think it’s important to make that line very known.”

The Pop Rockettes are nervous about contributing to existing stigmas surrounding dancers of their kind. Many rave events or clubs feature go-go girls on flyers to appeal to male attendees.

“I don’t want to be one of those dancers who thinks she’s more important than the DJ,” says Forrest, who explains there’s no reason she should ever take the place of a DJ on a flyer.

The Pop Rockettes go to great lengths to set themselves apart from the average raver. Forrest tries not to be too harsh on the “Kandi Kids” who go to EPR, admitting that she used to be one herself.

“Kandi Kid” is a name given to a typically young raver who wears beaded bracelets that resemble candy. The jewelry is affiliated with ecstasy use, and Kandi Kids tend to take the rave lifestyle seriously, even outside of events.

“We are providing a service and deserve respect. We aren’t just random girls dancing around drunk in our underwear,” Forrest says of herself and the Pop Rockettes. Since EPR has switched venues, there is ample room for attendees to imitate the Rockettes’ dance style.

EPR doesn’t stress sobriety as much as many clubs do, and unlike many go-go troupe’s Facebook pages – the Pop Rockettes do not explicitly state their dancers are one hundred percent sober. The girls casually sip margaritas in the dressing room, barely finishing half between the four of them.

“I take this seriously,” says Haverkamp, who explains that dancing while drunk would be near impossible, especially in six-inch boots.

On Wednesday morning, Forrest and Haverkamp wake up to go to morning classes at SF State, while Bakr heads to work at an office in Park Merced.

“I want it to be a part of my life, but I’m getting older and have a career, so I don’t have as much time to dedicate to it,” she says. Although now, Bakr is in her fourth year of go-go dancing.

The group finally decided that two girls will wear white and pink, while the others will rock white and blue. Forrest ties pieces of tulle she bought at her favorite discount fabric store in the Mission around the other girls’ waists and boots. The dressing room is getting sweaty and cramped and the girls head out for a cigarette to relax before the next three hours of dancing. Just another Wednesday night.