The Teardown: Eat Lead: The Return of Matt Hazard 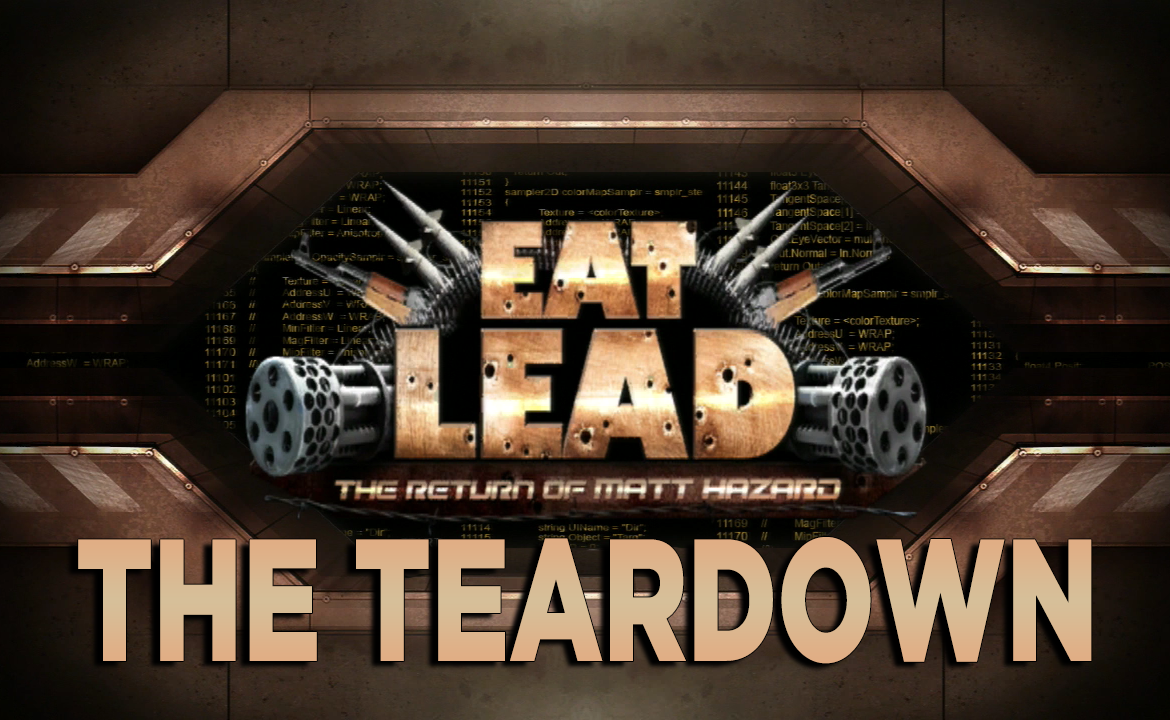 Platforms: PS3, Xbox 360
Release Date: February 26, 2009
Average Scores: 51, 53
I love Will Arnett. If I could only send out six invites to my next birthday party, I’d send at least four of the invitations to his house to make sure that he got the message on the off chance that he’d actually show up. While I’ll completely ignore his role in BoJack Horseshit, his representation as G.O.B. in Arrested Development and his guest appearance in this, the literal greatest video of all time, are the perfect embodiments of the loveable idiot. My love of Arnett and my gaming passion hasn’t intertwined until the release of Eat Lead: The Return of Matt Hazard, which puts Arnett into the armor as main character Matt Hazard. This seemingly perfect fusion is anything but; this game is a huge mistake.

Or a collection of huge mistakes if you want to nitpick. Coincidentally, none of these blunders stem from nitpicking because the game is almost immediately busted from the start. The sad part is, the game knows it.

Matt Hazard is a video game character that knows he’s a video game character. He rose to fame in the 8-bit days only to sell out and crash into the digital dirt with the release of high definition gaming consoles. It’s stupid, meta, and admittedly a great premise, but the game almost does my job for me by making fun of itself at every turn. Games have done the whole “hey, look at this dumb video game thing!” and Eat Lead pulls that cliché a lot, however I’ve never seen a game cold-heartedly jab at itself this intensely.

Hazard insults the boring level layout, the dumb tutorials, and tears into the game’s one original mechanic all within the first hour. It’s almost as if these started out as legitimate jokes to developer Vicious Cycle Software and then became a sad, grim reflection of its troubled (maybe even arrested) development.

It’s like the fat kid in fifth grade acknowledging the fact that he is fat in hopes that others will not find fun in teasing him. Its initial humor wears off as it becomes a dark reminder of something more bleak and serious.

Although childhood obesity is much more funny than anything said in Eat Lead, and that should tell you a lot. Besides the aforementioned hackneyed jabs at video games, the actual moment-to-moment dialogue is cringeworthy. The crude animatronic animation can’t distract the viewer from the awkward dialogue that makes up every scene. Here’s a rough exchange between Hazard and the stereotypical Russian bad guy:

Russian: “I snuck a nuke into America right under your hoses!”
Hazard: “It’s ‘noses.'”

I’m not even sure what the punchline is supposed to be there. He mispronounced a word. That’s it. There’s a craft to having dialogue that’s simultaneously terrible and god damn amazing. However, that takes skill and nuance far past anything found in this game. Far Cry 3: Blood Dragon, which was the right way to do a game parody, showed this by having intelligent cringeworthy dialogue. It paid off; that game was hilarious. Nothing of the sort is in Eat Lead.

Blood Dragon could lean on its shooting mechanics as well as its script while Eat Lead doesn’t get either luxury. Firing a gun is a general approximation of what you might hit because of the huge boxlike crosshair. The slightly racist enemies might die if you hold down the trigger long enough. At least they are nice enough to only occasionally use cover. Cover is optional to foes that spawn behind you as well, since almost every firefight has a surprise posse roll up from some closet in the back corner to pump you full of holes. Counting on these idiots to have self preserving actions and be fair, would be probably too much to expect.

I did expect more from you, Will Arnett. I know it ain’t easy being white, but come on! Putting out a game with you as the protagonist shouldn’t let me down after I’ve picked up the controller. I’ll still love you unconditionally and continue to watch this video and pretend that you’re talking to me, but this should be the perfect marriage of you and video games. Sadly, this game is a product of its time where putting out a haphazard (now that’s wordplay, Hazard) Gears of War clone was enough to call it a day. It’s almost as if I forgot its release date and expected a bad game from 2009 to magically achieve greatness in the drastically different gaming landscape of 2015.