Ladies of the Board 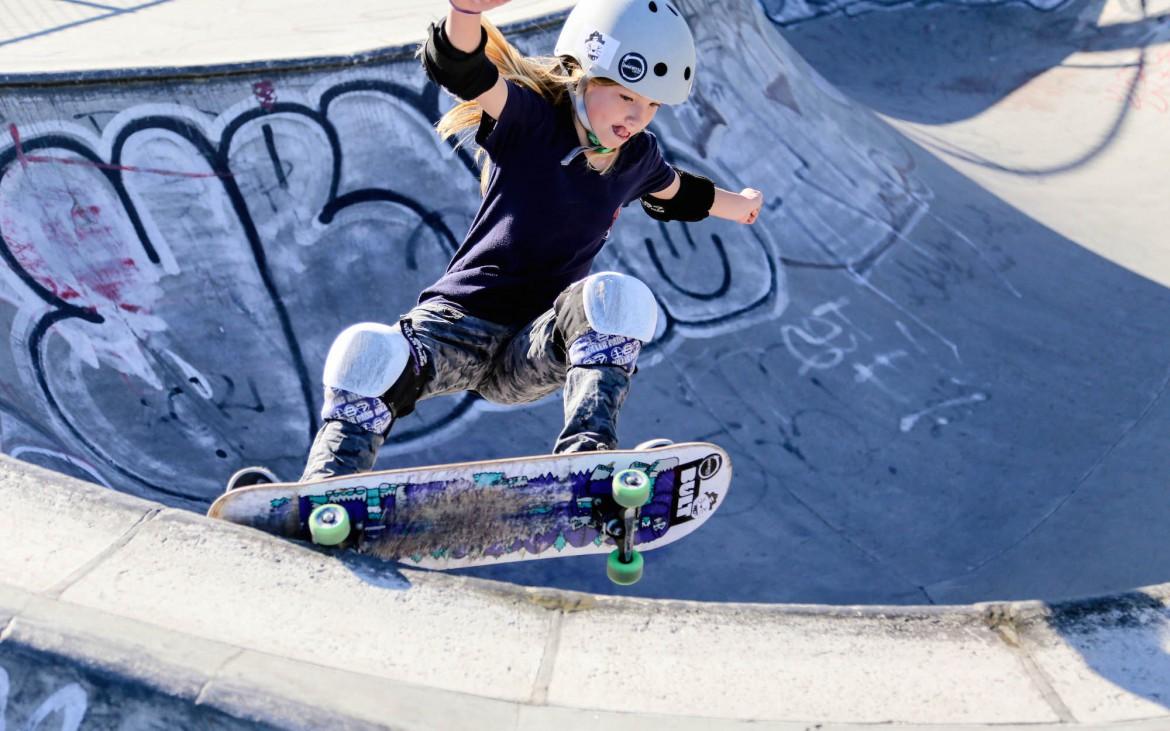 Zoe Safanda, 11, skates the bowl at the Potrero Skate Park in San Francisco at the monthly Skate like a Girl skate date on first Friday. All photos by Zhenya Sokolova

Among the sea of men at the skate park, a young girl with long blonde hair breaks the boundaries. The boys are eyeing her to see if she is any good. Dressed in camo pants, a T-shirt, and a helmet adorned with stickers, she races down the bowl. Her lips purse as she rides down with fixated eyes.

Despite her small size, Zoe Safanda isn’t afraid of the bowl. The eleven-year-old has been skateboarding since she was five. She’s here to break all the ideas you have about skateboarding, and she’s not the only woman set on doing this.

Skateboarding is often seen as a sport for men, but thanks to organizations like Skate Like A Girl, more girls are getting involved in the skate scene. Skate Like a Girl (SLAG) founded in Olympia, Washington in 2000, is a non-profit committed to empowering girls, and women, through skateboarding clinics and classes. Since its establishment, the organization has relocated to Seattle and expanded with chapters in Portland and San Francisco.

The San Francisco chapter is the youngest in the entire organization, with some members as young as six. It opened in 2008 when founder, Erica Harris, quit her job as a wildland firefighter for the U.S. Forest Service. She began volunteering at Skate Like A Girl’s summer skate camps, and during her time there, one of the organizers suggested she start a chapter in San Francisco. After giving it some thought, she started the chapter immediately after moving to the Bay for a new job.

“I wanted to do something positive back home, and skateboarding is a big thing in the Bay Area,” says Harris. “It just seemed like the right thing to do.”

Harris grew up in Ojai, a small, rural town in Southern California. She’s always had this keen interest in skateboarding, but never learned until she was in her late twenties. At 26, she felt like she was too old to learn.

When her friend mentioned that Tony Hawk was still skating, she realized there was no real age limit. The revelation led Harris to a pawn shop where she bought her first skateboard. She started teaching herself and became hooked.

Harris’ experience with skateboarding was mostly positive. Though often times, she says, women are underestimated in the skate scene. “Can you kick flip?” is a question that she says female skaters are always asked. The San Francisco chapter was created to provide a welcoming and all-inclusive space for not just female skaters, but for anyone with a passion or interest in skateboarding.

Skate sessions take place in several Bay Area cities: San Francisco, Berkeley and San Carlos, with skate dates happening every first and third Fridays of the month. Skate dates are meet-ups for anyone interested in learning or meeting others who can skate. Clinics, or drop-in lessons, are held every last Saturday of the month in an indoor skatepark at San Carlos.

Aside from skateboarding classes, the organization also uses skateboarding as a means to help the community. It has done everything from creating skateboard jewelry for fundraisers, to organizing free skateboard clinics for community events like Walk against Rape SF. But as compared to its sister chapters, SLAG SF is not as sustainable. The organization is entirely volunteer-driven. It hardly has access to clinics or parks. Most of where they skate is either in public spaces or donation based areas.

It’s Saturday afternoon and the Berkeley skatepark is buzzing. Two middle school-aged boys are playing a game of skate, a game similar to H.O.R.S.E., but with skateboards. Meanwhile, a few boys kick and push around the park with scooters. The skaters immediately stop and stare as young girls skate through the entrance. One boy, turns towards his friend with a snarky look and tells him, “They’re all girls.”

A woman passes out stickers with a vector image of a female skateboarder leaping in the air, while another woman leans against the fence, smiling when she notices more girls entering the park. The woman, Marie Baeta, walks over to greet them.

Baeta is the volunteer in charge of organizing Berkeley skate dates for SLAG SF. She’s been teaching skate clinics and sessions for five years. She discovered SLAG SF by accident while she was skating at Potrero Del Sol Skate Park in San Francisco, when she was approached by another skater. “I literally almost cried, I was so happy to find them,” Baeta recalls. “I wondered where they had been for five years.”

An hour passes and the air feels a bit humid. A gray-haired woman with sunglasses skates by. She slides along the edge of the bowl in a Paul Frank shirt that displays a monkey skull and crossbones. Stefanie Friedman has been skating for about a year now. “It’s good exercise for me,” she says. The 54-year-old took an interest in skateboarding out of curiosity after her son moved out, leaving behind a ramp that he built in their backyard. She’s here today to learn how to drop in on a bowl.

When it comes to skateboarding, women have been shredding it since the sixties. Despite there being badass skaters like Patti McGee and Peggy Oki, there’s an inherent sexism in skate culture. Women are objectified as sexy skater girls with scantily outfits in magazine ads, clothing and even skateboard decks. In a 2013 interview with Thrasher Magazine, pro-skater Nyjah Huston said, “skateboarding is not for girls at all.”

Based on Baeta’s own personal experiences, females sometimes get unsolicited advice from male skaters. “I’’ll get offered advice on how to land a trick like I don’t even know what I’m doing,” she explains.

For Safanda, skateboarding is more than just a hobby or sport, it’s one of her passions. She skates almost every day, at skate parks or at the ramp built in her backyard. She skates because it’s fun and she loves the challenge.

Safanda finds it frustrating when she can’t land a particularly difficult trick—but all her persistence pays off, leaving her feeling rewarded when she finally nails it

“Skateboarding gives her a great sense of freedom to develop confidence, and her own style of skating. She has the freedom to have fun and create her own movements,” says her mother, Elisa.

When Zoe first started skating, she didn’t know many female skaters. However, after skating with SLAG for about a year, she’s gained new friends and become part of a community skaters.

Doing anything “like a girl” used to be considered a pejorative statement, a dismissive insult. Baeta takes offense to this. She’s been skating for so many years, using her board to overcome crushing social anxiety.

She’d drive to Pacifica skate park, park her car and sit there deciding whether or not to get out. Her heart would pound, like a jackhammer. It took her many years, but today she has no problem going to a new skate park. Sometimes her heart goes off like an alarm, but things are different now. Becoming a part of the SLAG SF community has given her the space to expand her leadership skills. When she approaches a new park, she now has the confidence to skate without feeling like the world is caving in.

“Skateboarding has empowered me to fight for things that I want, to conquer fear, challenge stereotypes, advocate for underrepresented skaters, and of course, make the change that I want to see in the world,” says Baeta.