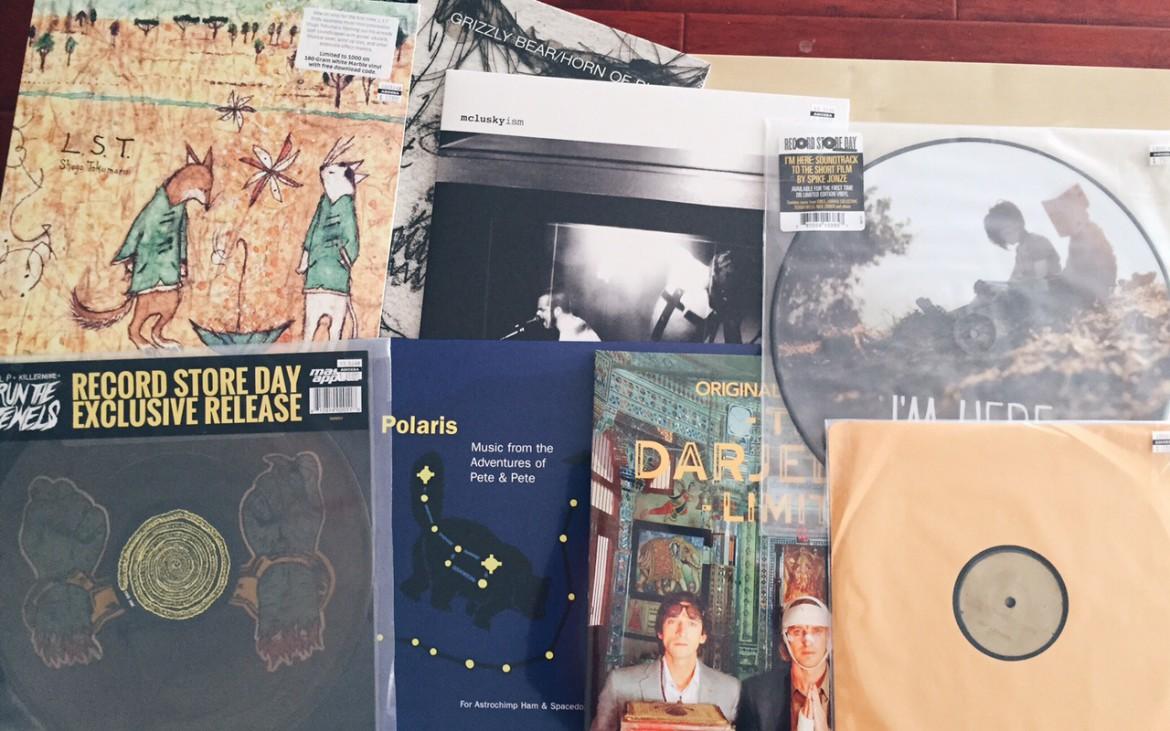 Okay I Believe You, But My Tommy Gun Don’t: My boyfriend and I’s collective Record Store Day 2015 haul.

“Who even checks for Brand New anymore?”

More than a few people apparently.

It was 8 a.m. on April 18th as my boyfriend and I woke up and readied ourselves before heading to Amoeba Music on Haight Street for Record Store Day, an annual celebration of all things vinyl, or Black Friday for music geeks. This is my first time attending the event, whereas my boyfriend has attended in years past. He was rushing me out the door, and I didn’t understand why. We were leaving over an hour early, and all the records we wanted weren’t that ‘popular,’ at least they weren’t in my eyes. However, I was in for a rude awakening.

Upon hopping off the 71, there was a corner-wrapping line. Iced coffee in hand, I glanced over to find an “I-told-you-so” face from my beloved. I shook it off, still assured, thinking to myself, “All I want is Shugo Tokumaru’s L.S.T. and the repress of Brand New’s Deja Entendu, and really, they haven’t put anything out in like six years since Daisy, no one should care anymore… Right?” I’ll be fine, or so I thought.

My poor boyfriend was anxiety ridden, his Notes app scribbled with nearly a dozen records, including an exclusive, ultra-rare pressing of Elvis Presley’s first recording ever (released by Jack White’s Third Man Records). I felt awful. Maybe I shouldn’t have been so sluggish in the morning? Maybe we should have woken up earlier? I royally, excuse my language, fucked up.

We were about a hundred folks deep in line, and by the time we got inside, split up entirely. I rushed to aisle 1A, where Brand New’s Deja Entendu was supposedly hiding, only to see a mere white post-it in its place. It had sold out within ten minutes of Amoeba opening. I saw a nearby man holding its RSD-exclusive brown packaging, and seethed at him. I cried over that album a million times from ages 14 to 16 (to present 22-year-old self). I deserve it, not you, late-twenties-aged bearded man. I blamed everyone else, when really who was at fault was myself.

Instead of relishing in my pouting, I teamed up with my boyfriend to help uncover the various albums he was lusting after. We got most of them, sans a Metronomy album and the soundtrack for mega-popular true crime podcast Serial, but at least he got that damn Elvis record. Despite our shortcomings, he left happy. I was less than so.

While I was bummed about my naïve, chaotic Record Store Day experience, I’m also reminded by the fact that I don’t collect records as avidly as my significant other or his pals. In fact, I only own around ten, and they’re either signed by artists whose shows I’ve attended or hold deep personal significance to me. Plus, I hardly ever play my records, which I’m guessing isn’t the case with avid record “collectors,” the people that Record Store Day is catered towards (obviously).

Maybe that’s why missing out on the Brand New record hurt so much, being someone who only buys vinyl for sentimental value rather than playable value. Regardless, I’m reminded of its standard reissue to be released in May, and my hopes aren’t diminished for that, yet. If I really needed the limited edition so bad, I could have woken up earlier, alas, here I am. Sad and disappointed in myself.

I walked into Record Store Day a naïve girl who severely underestimated the rampant vinyl enthusiasts that attend it, but left a more aware, future-Record-Store-Day-prepared lady. I’m hoping next year I actually get what I long for. If not, there are always the insane second-hand sellers on Ebay.