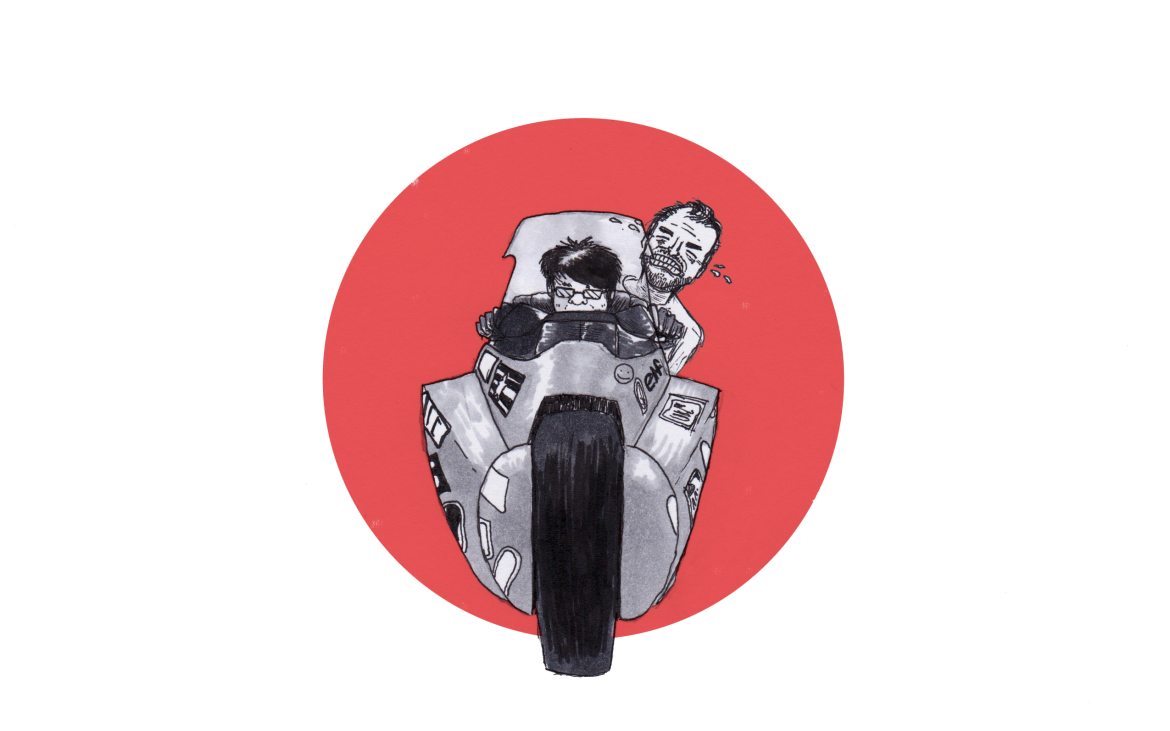 An illustration of founder of Cyberpunk Cinema, Tosh Chiang, and founder of Thrillhouse Records, Fred Schrunk, driving the iconic motorcycle from Akira, a featured film at Cyberpunk Cinema. ILLUSTRATION BY JEREMIAH WILLIAMS. ALL PHOTOS BY ANGELICA WILLIAMS.

Akira’s opening scenes establish the setting of the grimy dystopia of Neo-Tokyo. A once-shiny city turned desolate, as questionable hero Kaneda races through the city with his biker gang while riding his iconic, blood red motorcycle. Kaneda’s bike is sticker-ridden, and looks bound to fall apart at any moment – yet it’s the envy of all his comrades. Kaneda’s aesthetically cool bike has been the fancy of fans of the film for decades – including fans sitting in the dive bar Knockout, located in San Francisco’s Mission district; a bar that screens cyberpunk movies every second Monday of the month. With its techno-junk charm and rugged punk look, Kaneda’s bike encompasses the aesthetic of the cyberpunk genre in a nutshell: lots of grit.

Cyberpunk, formerly relegated to the depths of William Gibson science fiction novels, has attained cult status among sci-fi fans. Typically focusing on gritty, low-life realism in a hyper-technological futuristic society, cyberpunk is grungy in all aspects but the name.

Perched on the cross streets of Valencia and Mission is Knockout, a modest-looking bar that is hosting its monthly Cyberpunk Cinema night. Inside Knockout it’s quiet, contrary to other bustling Mission bars, and full of attentive locals simply looking to enjoy a movie and sip on a brew or two. Knockout’s event is unique and singular to its neighborhood, and a night dedicated to weird, often-forgotten science-fiction is nearly unheard of in the Mission – until Cyberpunk Cinema happened. This particular night’s feature of choice is Katsuhiro Otomo’s 1988 gritty post-WWIII anime Akira.

Films such as Robocop and Total Recall brought the cyberpunk genre to commercial success, films that Cyberpunk Cinema organizer Tosh Chiang would label as “mainstream” choices rather than “integrity.”
“We always try to choose a movie you would wanna watch in a bar,” says Chiang, noting that a crowd wouldn’t show up to watch cult-Japanese cyberpunk film 964 Pinocchio, but they would for say, Blade Runner. Chiang switches between these two “types” of cyberpunk films every month for the Knockout event.

As Akira is projected on a wall in the darkened bar, the occasional text will scroll by the top of the screen to encourage the crowd to tweet facts or reactions using the hashtag #cyberpunkcinema. Tweets, and written text from Chiang himself, scroll across the screen during various points in the film: from facts about the film (“The creator of the film and manga didn’t know about cyberpunk before making Akira”), to notifications about the free popcorn going haywire coincidentally during a climactic scene (“Much like Akira, we need help controlling the popcorn”), and to general humor (“Where is Godzilla when you need him?”). Crowd participation makes Cyberpunk Cinema feel more like a community event, rather than simply watching the movie at home.

A typical night at Knockout is uneventful. On any other Monday night the bar is nearly empty, with only a few folks, Chiang included with Schrunk bartending. They retell familiar stories and talk animatedly about music and films that they love. Chiang and Schrunk have been friends since 2005, when their respective bands Crimewave and Robocop 3, eventually decided to embark on a joint tour: Crimecop.

The status of the punk scene, apart from cyberpunk, in the Bay Area is alive and well, surviving the internet age in surprisingly unique ways. Schrunk started the volunteer-run, non-profit Thrillhouse Records, and continues to run it in the belly of the Mission to this day.

“I love records and always dreamed of opening a record shop,” says Schrunk. Schrunk and Chiang have been involved in the local punk scene for years, which adds to their passion for cyberpunk.

“I love the complete non-standardness in punk,” Chiang says. “Once you get beyond the different intricacies, at the end of the day it’s about having a good time and no matter how angry it’s perceived, it’s still hopeful.”

“In college, I wanted to start a cyberpunk film festival,” Chiang says of his time at Bard College in New York. Although that plan never truly formulated, the idea for a cyberpunk cinema night stewed for years, before coming to fruition during his time volunteering at Thrillhouse Records and hanging out at Knockout.

Cyberpunk for Chiang, Schrunk, and dozens of like-minded fans, run parallel to the punk music scene. Disruption, the collapse of the 1950s American Dream, and the running trope of manipulative corporations are all a common thread among cyberpunk media, sharing more likeness with punk than what meets the typical sci-fi eye.

“We’re in the most tech-advanced city in the country, and it happens to also have a large punk culture,” says Chiang. “And for some of us, it tends to overlap.”

In a typical night at Cyberpunk Cinema, the event begins at 6:30 p.m. with an episode of the classic 1998 western-space-noir anime Cowboy Bebop, a show about a group of cigarette-smoking goofball bounty hunters in the year 2071, as they hunt criminals of the week to composer Yoko Kanno’s delightful bebop jazz. Cowboy Bebop is a show that Chiang holds dear, due to its strong content of space-bound hijinks coupled with typical rascal struggles – cyberpunk personified.

Chiang and Schrunk play an episode of Cowboy Bebop at every event to account for “punktime,” a term that Chiang and Schrunk define as when someone is a half-hour to an hour late to the event’s start time. This way, the feature film won’t begin until after the episode, giving those that run on “punktime” a cushion, and it seems to be a proven formula. As the episode “Bohemian Rhapsody” of Cowboy Bebop ends, and silly old trailers for Akira are shown, one of which loudly proclaims, “Akira makes Blade Runner look like Disneyland” to the laughter of Knockout’s crowd. A steady stream of people slowly fill the bar’s seats and order the “Tetsuo” drink special, named as an homage to Kaneda’s friendly foil in Akira.

The event has become a monthly community staple for cyberpunk fans in the depths of the Mission, garnering a steady following of returning attendees. For Schrunk and Chiang, cyberpunk is more than just a genre.
“Cyberpunk tends to incorporate the chaotic aspects of technology,” says Chiang. “There’s no frills, just rough edges.”

Cyberpunk Cinema hosted its special one-year anniversary event on April 13th, where they screened Dredd, a film that Chiang believes is the perfect blend of crowd-pleasing and obscure, the ideal film for Knockout’s one-year celebration.

Like the everlasting coolness of Kaneda’s motorcycle in Akira, Cyberpunk Cinema isn’t a niche event looking to fade, but to remain static as an oddball staple in everything weird this little-big city has to offer.