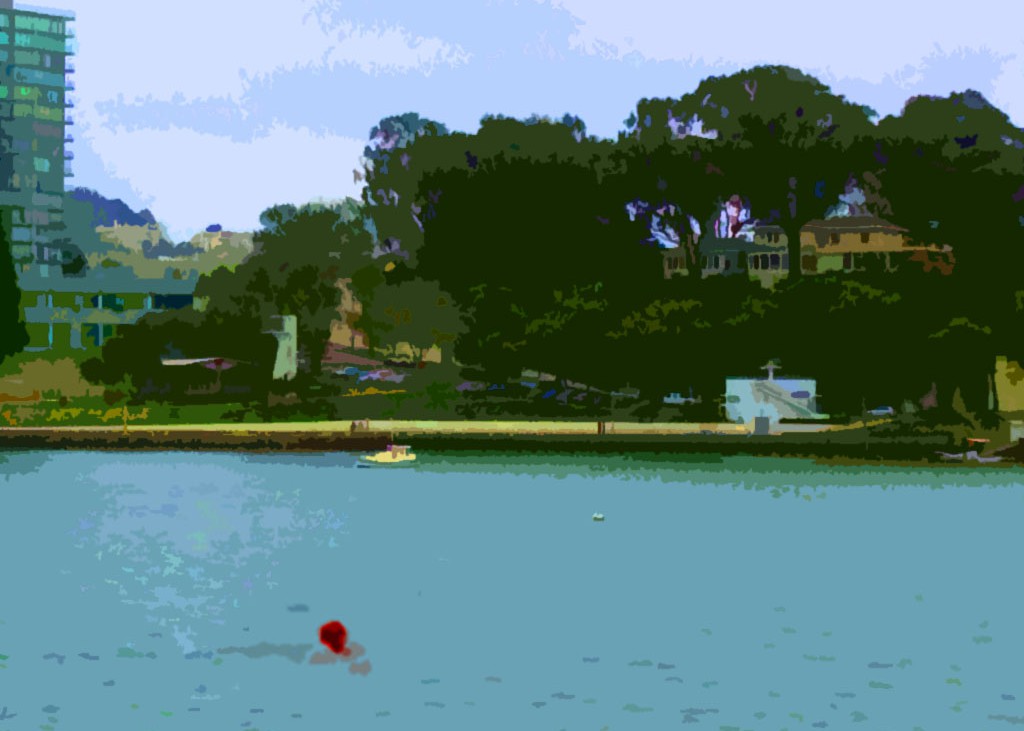 While most San Franciscans run along the polluted water in the harbor near Fort Mason, a few people have bewildered others by working out in the bay. Meet an open-water triathlete who swims among the boats and oily soil every week to train for Hawaii Ironman Triathlon – referred to as “the most demanding triathlon in the world.”

So you made your way to the end of the pier of Fort Mason. It is Saturday and the silence seems scary out here, no honking horns, no downtown sounds. You can’t even here the sloshing water from the Bay that is as still and grey as the sky. So you pay attention to the Golden Gate Bridge in the horizon – covered up in fog as always. You turn around clockwise; there is Alcatraz, the skyline of San Francisco, here are the big boats, the polluted water and an old sign in front of you.

“Only allowed for swimmers!” the old paint reads. You wonder what it means. Who would swim in a dirty harbor? Wouldn’t it be dangerous?

It doesn’t make any sense, so you forget about it immediately before something breaks the silence.

You hear the sound before you see the man. A red swim cap is moving slowly by, up and down, like as the needle on a sewing machine. Now and then the swimmer raises his head and reveals his swimming goggles and an open mouth – it looks like he screams with no sound. He is not alone. A blue swim cap is following him at the same pace and you look around – behind both shoulders – stoked to share the moment with someone.

You look back at the water. It looks freezing.

“It is! – it might be around 50 Fahrenheit today!” exclaims a person behind you, it is 42-year-old Robert Rogers who is an open-water swimmer and a triathlete.

“But actually your body get used to the low temperature. If you sit in the shallow water for about 5-10 minutes the body will acclimatize – and you can go for a swim. If you don’t your body will go into shock,” he says and zips his wet suit at the back of the neck as if it was the most normal thing in the world.

“Luckily I have a wet suit, but look at these guys,” Rogers says while he points with his index finger on the man with the blue swimming cap. “He doesn’t wear anything! That is crazy! He is definitely a Polar Bear,” Rogers says and explains that there are different groups of swimmer in this harbor.

The Polar Bears don’t wear any wetsuits. “The guys from Oakland do,” Rogers says. He does as the rest of his local club – The Dolphin Club; he is swimming with a wet suit. This is his second time swimming in the San Francisco Bay. He is originally from Los Angeles.

“I am used to 60 [degrees] and above – so the first time I swam here it was so very cold. I think it was 49 [degrees]. It was freezing. But now I am getting used to it. I am not afraid for the grey water, or for boats suddenly coming into the harbor. This is a pretty safe area to swim in,” Rogers says.

He swims here every Tuesday with The Dolphin Club.

“But it is open to everybody who wants to do this on a Tuesday night,” he says and bursts into a laugh, as no one other than triathletes would ever do this. And while he is laughing there is not really any body fat that vibrates under his skin. He is well-trained as a result of all the exercise he has done.

“The hardcore workout has changed my life! And I am very happy with the way I am living today ’cause it hasn’t always been like this. I was a smoker. That was in 2011,” he says and pauses so the drizzling sound of the waves, that hits the edge of the sand, yells in the afternoon. When the foam grows it looks like when you pour your soda in a cup.

Roger did an amateur triathlon race in 2011. “And I just got hooked! When I finished my first run, I just wanted to do it again. And again. And again,” he says as if he is talking about his tattoos.

“It is just addictive,” he says – even though the first month was though with smoking lungs and him in bad shape. He started to swim in an open water pool but after a month he transferred to the real deal.

Miles away from swimming in a pool

“And that is a whole other thing! When you swim in a pool, you follow a line. In open water you might think you swim completely straight. But you don’t. You can’t see anything, that is why you raise your head, and you are not sheltered as in a pool,” Rogers says and explains that different elements in open water as the flow of the waves and the tone of the water all in all make it more difficult to swim in open water. Especially here near Alcatraz, according to Rogers, where a famous triathlon race is held every year. It is called the Escape from Alcatraz Triathlon.

“They’ll say that if you make it here, you make it anywhere. That is because the water is so brutal,” says Rogers. And that makes is difficult to swim in a straight line, as you would normally do in a pool. That is why it is a good idea for the open water swimmers to choose a specific spot they are swimming towards – to keep sight of the track.

“For example…” Rogers says in long words while he points out to his right. “The roof of that red building is my point and when I am going back…” he says points in the opposite direction, “…the tower of that white church is my spot.”

Rogers normally swims less than an hour. In 40 minutes he can make two loops in the open water. As a part of his training he rides his bike 4-5 miles with the club afterward. This helps him improve the transition between different sports which – according to himself – is the hardest part of a triathlon.

“I take it step by step. I want to swim 2.4 miles within two hours as you would have to complete the Hawaii Ironman Triathlon, which is the highest level a triathlete can complete. That race is my next goal,” Rogers says. According to him, you have to finish the run within 11 hours.

You wouldn’t imagine this man had smoked a single cigarette in his life.

“For me it has been a complete lifestyle change. That’s for sure. And everybody can do it, just sign up for a race! Don’t think about it!” says Rogers as he straps on his goggles and gets up to enter the freezing water.