Guitars Not Guns: The sound of change 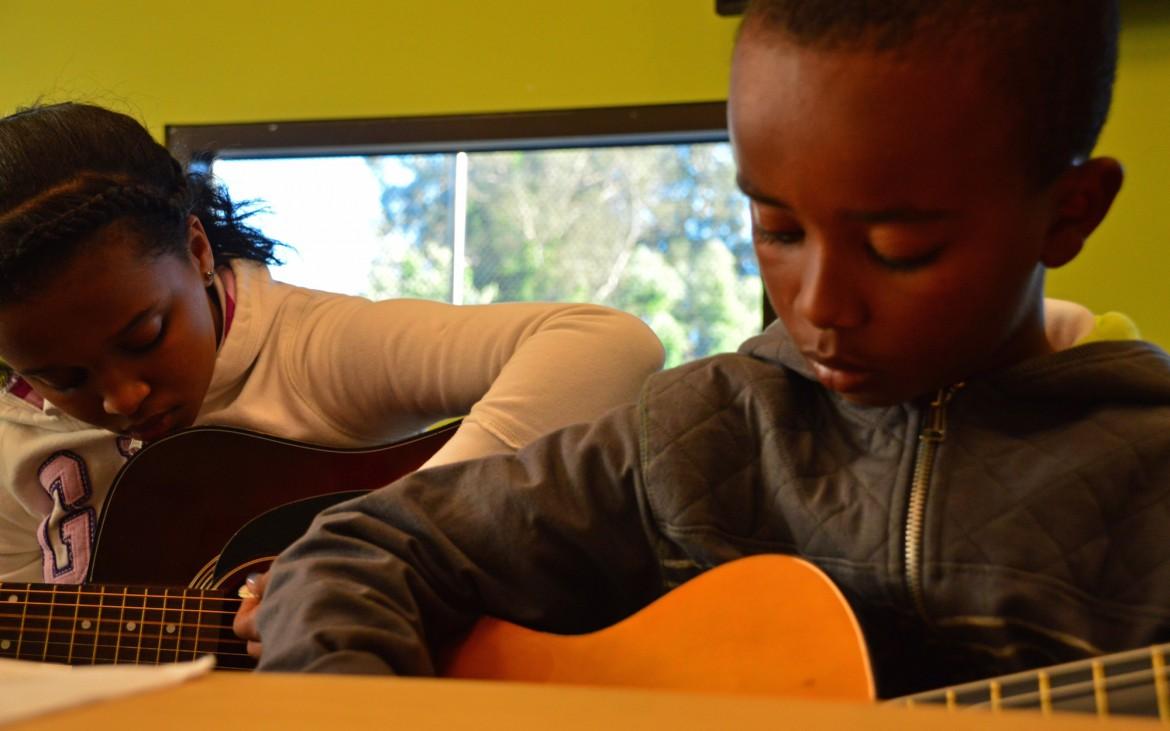 Children begin to trickle into the San Pablo Community Center at 6:45 p.m. The atmosphere is quiet and still, but the excitement from the children’s faces is energizing the entire building. Each has a guitar in hand, and a shy smile on their face. They’re greeted by their instructors and assume their seats. For eight weeks, the group will meet for one hour sessions every Tuesday evening. Some of the children have gone through the program before, while others have no idea that during the graduation ceremony after the completion of the program, it’ll be announced that the guitars the kids have been playing are theirs to keep, and not just temporary pieces in their life.

Guitars Not Guns (GNG) is an international, non-profit organization that has been around for quite some time. Founded by foster parents Ray and Louise Nelson in 1992, the volunteer based program, was recognized by the federal government as an official nonprofit in 2000. Its mission is to provide guitars and lessons to foster kids, at risk youth, and other deserving children in a classroom setting with qualified teachers. No child is turned away for lack of funds, and they also specify that they are not anti-gun, they are anti-gun violence.

“A program such as this could offer many benefits to getting children started on a life saving path,” says Patrick Casey, a volunteer instructor and a psychology student at U.C. Berkeley.

Though San Francisco and Alameda counties have chapters, neither are currently as populated as the Contra Costa County chapter, spearheaded by President Barbara Gorin and her staff of volunteers. With the program’s continuously growing popularity, the chapter has faces over-enrollment with the same limited number of staff.

Gorin has been a part of GNG for nine years now, starting off as a teacher, then moving into fundrsing, then into acting as vice president, and is now the current president of the chapter.

Being completely non-profit, the program runs completely off of donations and volunteers. All guitars are donated from various organizations, either for the students or they go on to get signed by famous artists, such as Deep Purple’s Tommy Bolin, Heart, Slash, and Van Halen’s Sammy Hagar, and then auctioned off on eBay.

“One of the very first artist I went after was Heart,” says Gorin. “I did a fundraiser and this organization donated two guitars to our program. It took me two years, but I was actually able to have Heart sign that guitar.”

GNG consists of children mostly between the ages of eight and 18, and because it’s free, the organization is able to offer up something to kids who might otherwise not have the opportunity to learn how to play music.

“I think that the program offers huge benefits for the community and fills a void that has been created by the removal of many musical electives in schools,” says Jennifer Chong, recreation coordinator for the city of San Pablo.

Tyree Hopkins Jr, a nine-year-old, and 12-year-old Kimyatta Newby are in the San Pablo-based session this May. Hopkins says the class “help us with the guitar and do our chords and help us practice if we want to do a song by ourself.”

“I always tell the kids ‘music is a gift that we can help give to you but no one can ever take away from you,’” says Gorin.