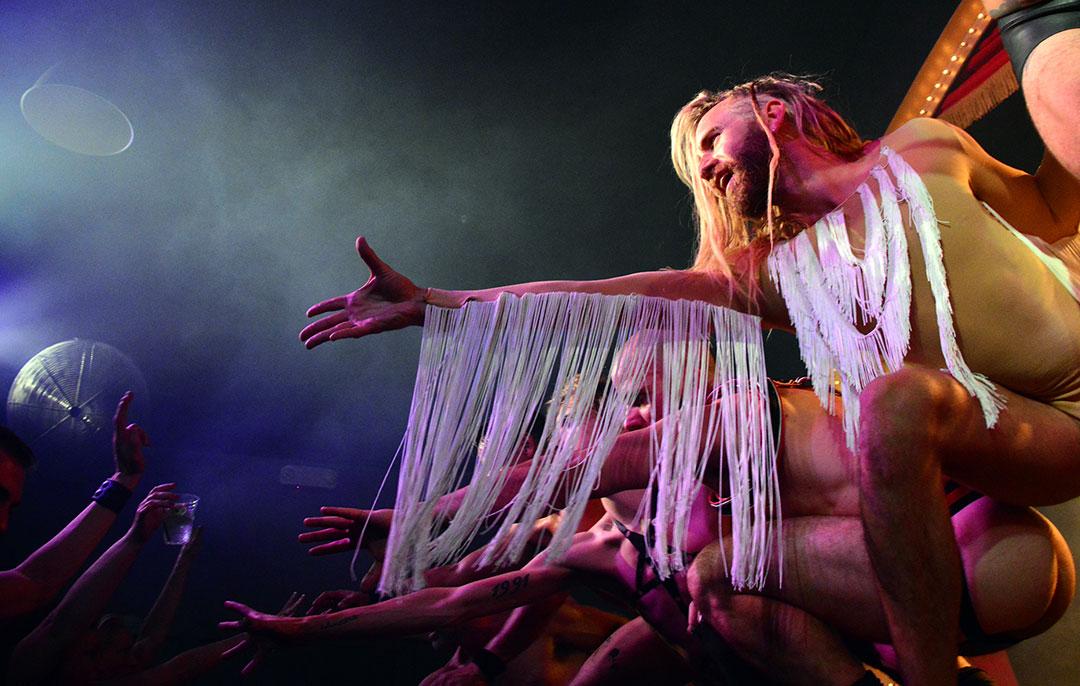 [dropcap size=”50px”]A[/dropcap]n unhappy couple celebrated their marriage by sitting together watching TV. They surprised each other by exchanging gifts which would dissatisfy one and enthrall the other. The husband disappointed his wife with a bottle of perfume while she startled him with a blindfold and handcuffs.

With his eyes covered, she invited a third party to join in on the couple’s sex act, making her spouse the victim of a kinky fetish. She disguised the strange man’s identity by spritzing perfume on his wrist and together they worked to cuff and undress her husband. After pulling his pants below his knees, the wife gave her husband up to the stranger who took him orally while she watched in enjoyment. All of this occurred while a remix version of Olivia Newton-John “Let’s Get Physical” played in the background as the three cast members of the production “Baloney” rehearsed “The Anniversary” scene in a Bernal Heights home.

Rehearsals took place in the home of San Francisco based performer, filmmaker and director Michael Phillis and his partner and choreographer Rory Davis. The couple removed the furniture and placed mirrors along the wall, converting the living room into a mini dance studio. This was all in preparation for “Baloney,” which returned to the South of Market nightclub, Oasis, this September following a two-month-long hiatus.

Take a listen inside a rehearsal of “Baloney” at Phillis’ and Davis’ Bernal Heights home.

“Baloney” is the result of Phillis and Davis’ love for performance and pornography. It was created in support of the opening of Oasis in January 2015. The name was inadvertently just a working title. However, inspired by Oscar Mayer Bologna, it became a metaphor of the heart of the show; American meat, just like the men of the revue. They chose to spell it in the nonsensical way to fit the shows personality of fantasy and men.

From other male revues, “Baloney” undoubtedly stands out by being a mixture of cabaret, vaudeville and burlesque that has a core audience of gay men and women. It is a concoction of what Phillis describes as “part theater, part dance, part peep show,” a provocative striptease with story and substance.

A mixture of those three elements defies the typical male revue, which usually involves sexy performances from hip-pumping men with rippling muscles. What makes “Baloney” distinct from other San Francisco entertainment is billing themselves as a gay all-male revue that’s not entirely gay and not entirely male.

“Even though it’s built as a gay all-male revue, does that mean there shouldn’t be any women in it? We don’t think so,” Phillis said.

“The Anniversary” is one of 15 scenes that breaks the predominantly gay cast into diverse parts by the inclusion of Nancy French, an actress who played the wife, and Eric Tyson Wertz, a bisexual actor who played the husband.

“Being a female in an all male revue is perfect for me,” French said. “I do a lot of gender bending roles in theater and drag stages throughout San Francisco.”

French is no stranger to the revue or the Oasis stage. She played a man, MC Clamchop, in July’s “Baloney” show and wrapped up a nine week show called “Champagne White and the Temple of Poon” on Sept. 12.

“I do a lot of drag and straight acting, but my passion and my community lies in the gender bending theater of the ridiculous world,” French said.

Phillis said the scene could only be done if an actual woman acted in it, which is inspired by a fantasy of having sex with a stranger. Even though they have French calling the shots, the fantasy is still centered around male-on-male sexuality.

According to Phillis, “Baloney” is an amalgamation of many art forms–having scenes only set to music with no dialogue, the story is told through choreography routines. Each story involves a strip element, but cast members are not fully nude.

“It’s all about getting to that point by the unveiling, the pealing, the vulnerability of taking off clothing,” Phillis said. “It’s more about the journey than the destination.”

“Each story is a mini theater piece that has a beginning, middle and end,” Phillis said. “You’re going to get a character and a story.”

“No matter how many women and different themes we incorporate, our audience will always be gay,” Phillis said. “We want gay men to be able to see their stories on stage and they always will.”