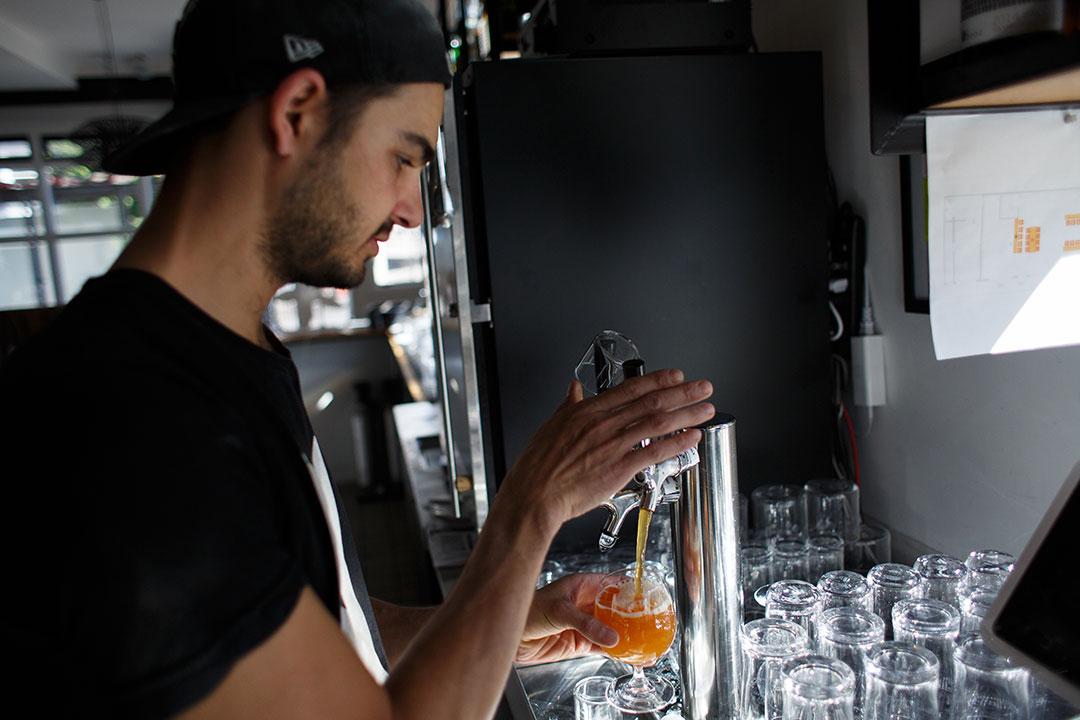 Cole Emde, the master brewer at Black Sands Brewery on Haight Street in San Francisco, pours himself a pale ale that he brewed and is sold in their brew pub on Monday, Sept. 7, 2015. (Ryan McNulty/Xpress)

[dropcap size=”50px”]C[/dropcap]lad in denim jeans and calf-high rubber boots, two men stood over stainless steel vats of boiling water and quickly built up a sweat that bled through their thin t-shirts. A potent aroma rose from barrels of grain that smelled like crushed saltine crackers and boxed cream of wheat. They wore backward hats and paper masks to cover their mouths.

Emde and home brewer Alex Magill were making a batch of Imperial Pale Lager from Magill’s own recipe at the brewery.

During the mashing process, Magill, 26, stood on a short step ladder and stirred while Emde used a plastic ice scoop to drizzle grains into the vat. He did not pour it straight out of the scooper but instead, to prevent clumping, sprinkled the grains out of the side, much like how a baker might powder fresh doughnuts.

Emde and Magill are part of a subculture of homebrewers in San Francisco, many of which started brewing beer in college, some in high school and others who picked up the hobby when they moved to the city.

Magill got his start in college about three years ago when a friend invited him over to help brew a batch.

“It started as me going over to help out a friend,” Magill said. “And it quickly turned into me just getting drunk and having a good time.”

Magill quickly immersed himself in beer culture and soon came across Black Sands, a one stop shop for brewing equipment, ingredients, recipes and lessons. Magill said his most recent batch will be served at the brewery and he is looking forward to seeing what both fellow homebrewers and non-brewers think of his beer.

While Black Sands is a meeting place and learning environment for aspiring brewers, many other beer fanatics attempt to brew independently in their own backyards.

Upon moving to San Francisco in 2008, Chris Cohen was introduced to the craft and became hooked on making his own beer. He realized there were no beer brewing clubs in the city so he decided to create his own.

“I really wanted to meet more people and talk about it with other people and learn from each other,” Cohen said.

That was the beginning of the San Francisco Homebrewers Guild, which now boasts about 170 due paying members according to their website, one of which is Black Sands. Cohen said homebrewers in San Francisco are as diverse as the city itself.

“In a SF spirit I wanted the club to be open to everybody, not just the white man stereotype,” Cohen said.

Cohen acts as a judge during his club’s beer tasting competitions and this year SFHG will be hosting a statewide competition in late October.

“There’s a real artistry to beer design,” Cohen said. “And you know what, shit, it’s a really fun thing to do with your friends. Just invite your friends over and have everyone brew their own beer.”

Not all brewers are as inclusive, however. Shaun Chan, a biochemistry major at San Francisco State University, said that while having an extra hand is helpful when brewing, he avoids inviting a lot of people over so he can make sure his equipment and work space is clean. He said that sanitation is one of the biggest challenges when brewing.

Chan is from Humboldt County and has been brewing with his friends since high school. He said that part of the reason why he brews his own beer is simply because he enjoys drinking beer and can’t afford to buy it all of the time. Making himself a batch saves him money and a few trips to the store. He is a fan of Indian Pale Ales and his favorite recipe is an all-grain pale ale brew which requires plenty of fresh hops to mimic an IPA taste.

While Chan started brewing to have beer on demand and Magill was introduced to it through a friend, some brewers picked up the hobby through pure curiosity.

Ivan Real, 23, works for Keysight Technologies in Santa Clara as a manufacturing engineer and lives in San Francisco’s Mission District. He takes Caltrain to work, and as a result finds less time for brewing than he did when he started a year ago.

“I started brewing beer my senior year in college with my roommate,” Real said. “We got into it because of curiosity. We both loved drinking beer so we thought we might as well learn the brewing process and understand what exactly went into this bubbly intoxicating substance.”

Real brews about five gallons at a time and said he prefers to make ale because it is more “forgiving” and tastes better to him. He said because ales can be fermented at room temperature, it is easier for him logistically since he can let the batch sit and brew anywhere in his home, as opposed to buying and squeezing an extra fridge into his small apartment.

Real said he enjoys the camaraderie that comes with making beer in San Francisco. Cohen’s brew club, Emde’s brewery and homebrewers like Chan bring the community together to keep beer culture alive in San Francisco.

“Brewing is a great way to get people with a common interest together,” Real said. “Ideally if others brew, everyone can bring their newest batches of beer to share and trade with others while we drink and talk.”