For Pleasure or Pain 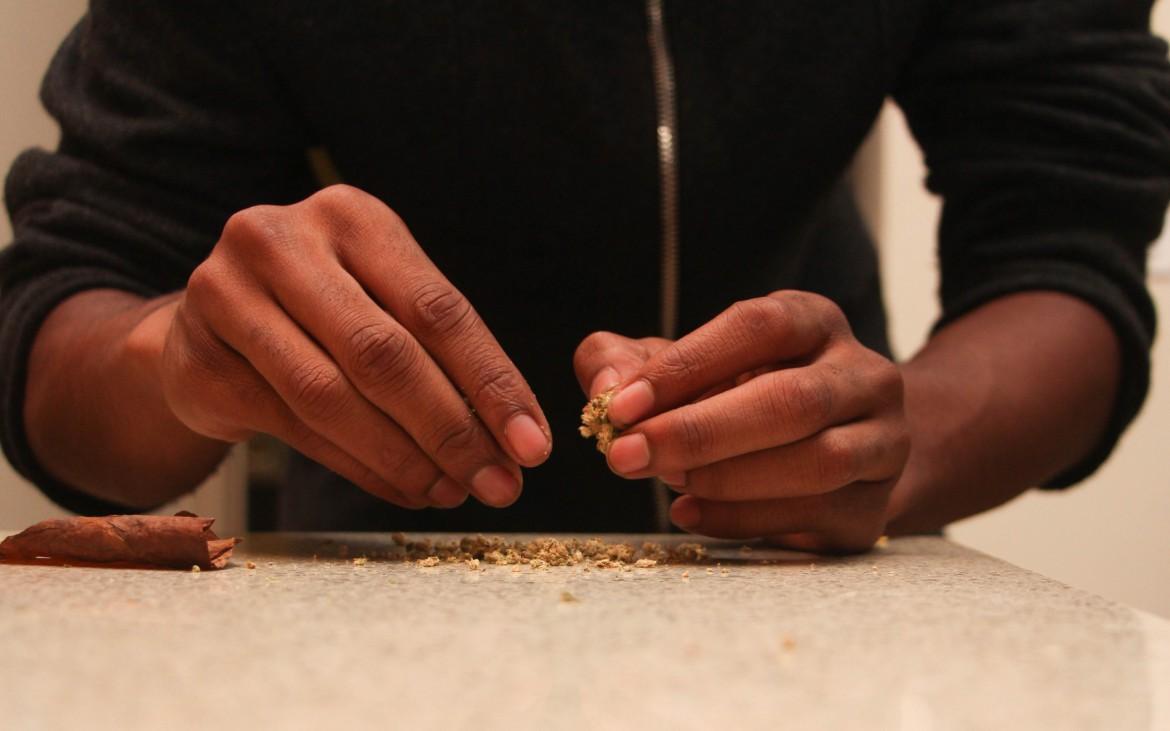 Bay Area rapper and producer, Chris Thomas, breaks up some marijuana that will be rolled into a blunt and smoked in San Francisco, Sept. 13, 2015. (Xpress/ Kofman)

[dropcap]B[/dropcap]ehind the multi-colored windows of a secluded storefront, patient David Lewis struggled to choose his medicine for the day. Green Crack, Purple Urkel and Gorilla Glue were among his options. The menu was posted on a 72-inch flat-screen television, which listed the flowers, concentrates and edibles offered at the Bloom Room Collective, a medical cannabis dispensary in San Francisco’s South of Market District.

Lewis, a medical marijuana patient, is able to buy marijuana at dispensaries across California to treat his insomnia and joint pain.

“I went medical in 2011 after being a recreational smoker because all the weed dealers I know are bad businessmen,” Lewis said. “At a dispensary I know what I’m smoking. The time, money and quality of weed is better from the club than a gamble for some good on the street.”

According to Adam Mintz, a marijuana reform advocate, two opposing schools of thought have prevented California voters from establishing a way to regulate marijuana use in the state. The old school of thought, Mintz said, see those who use marijuana as lazy stoners whereas new school thinkers believe people have the right to indulge recreationally and medicinally without being criminalized.

However, on Sept. 11, the California Senate and Assembly passed a series of bills that, if signed by Gov. Jerry Brown, will establish the state’s first regulatory system for medical marijuana. Bills AB-266, AB-243, and SB-643 are designed to regulate laws concerning cultivating, processing, transporting, testing and distributing medical cannabis to qualified patients. If the bills are signed, dispensaries will have to register for state and city permits to legally operate, according to the bills.

“All three bills were taken into the governor’s office, and it’s understood they are going to sign it or in turn it will automatically be passed through,” Mintz said. “There doesn’t seem to be any doubt of that.”

With proposals for medical marijuana regulation underway, advocates across the state are gearing up to qualify legalization for recreational use of marijuana for the November 2016 ballot.

“As of right now California is operating on a patchwork system of regulation for the medical cannabis industry – not even county but usually on the city level,” Mintz said. “These bills do not mention recreational cannabis whatsoever, but because of the timing of the legislation we all assume that they will be the framework so that we can smoothly roll into recreational in 2016.

“Several initiatives are currently filed, but none have qualified with the necessary amount of signatures, according to Lauren Vazquez, deputy director of communications for the Marijuana Policy Project, a foundation dedicated to reforming marijuana laws in the United States.

There are several initiatives filed that have not been approved, and it is unclear how recreational legalization will affect how the state handles medical marijuana use. Mintz hopes that the legislation that gets adopted is a hybrid system similar to what was passed in Colorado in 2012, which allows 18-year-olds to use medicinally and 21-year-olds to use recreationally.

“It’s no secret people use marijuana for medical and recreational reasons,” Mintz said. “If I have a flu, and feel awful, and want sleep and be dead to the world, I’ll eat an edible. If I want to hit a joint after work, I may do that.”

In the past recreational legislation has seen strong opposition and despite that, Mintz feels like the public is ready for full legalization. In a poll released in April by the Public Policy Institute of California, 55 percent of voters believe that recreational marijuana should be legal.

While smokers would like to see recreational use legalized, Lewis said that if the bills pass they will not have a dramatic affect on their habit.

“If it ends up on the ballot, I mean yeah, I’ll vote yes, but out here it feels like weed is legal already,” Lewis said. “I have my med card, so I feel comfortable smoking anywhere in San Francisco.”

According to Bloom Room manager Stephen Rechif who has been in the industry for 12 years, casual users are not concerned with legalization. However, thousands of medical dispensaries and delivery services throughout California, over 50 located in San Francisco, will see effects in how they operate.

“If recreational is legalized it will turn the industry upside down for sure,” Rechif said.  “Some people think we are nuts for supporting recreational, but the primary goal here at Bloom Room is to increase access to cannabis for everybody.”

Most dispensaries don’t support the idea of recreational legalization mainly because they feel it will diminish their profits, according to Rechif. However, some employees in the industry just want people to be happy.

Krista Luna, a receptionist at Compassionate Health Options Clinic in the Mission District, sees the benefits of both medical and recreational use, and said the time has come for legalization across the board.

“Its 2015 and it’s sad that weed is still being criminalized,” Luna said. “I mean, I’ve had people from across the world come in to apply for their cards. Tourists from Australia, Poland and around the states come so that they can smoke in Cali for the two weeks that they are here. There’s a chance that it all can get fucked up but I support recreational. I think everyone should have access.”