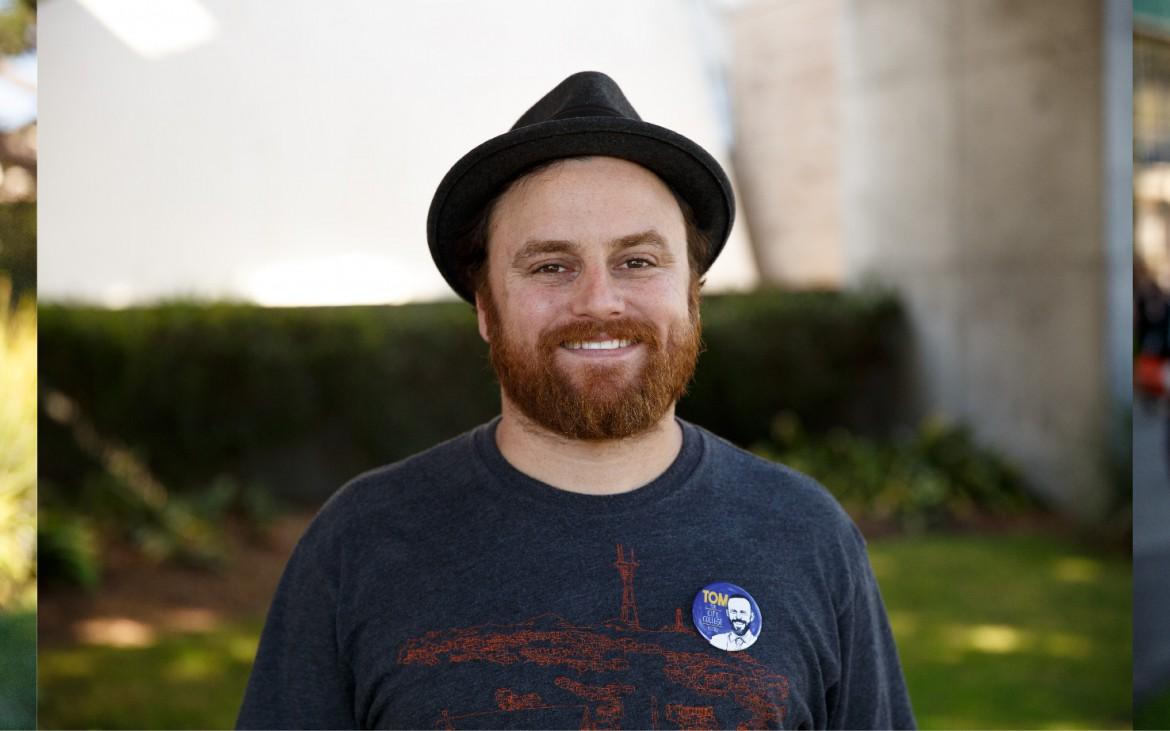 Amy Farah Weiss (left), Stuart Schuffman (middle), Francisco Herrera (right) take a moment out of their campaigning at SF State to pose for a portrait. Photos by Ryan McNulty/ Xpress

Amy Weiss ran to speak to potential voters about her hot-button issues. With her cap tilted slightly to the side and button up fixed to the top, she couldn’t wait to talk about housing issues, small businesses, non-profits and everything else relating to her campaign.

Francisco Herrera had a debonair demeanor, with his tied-back ponytail and sharp three-piece suit,  his hands gripped his bright green campaign sign.

Stuart Schuffman oozed San Francisco local with his neatly trimmed beard and trademark fedora. His disposition was relaxed, but he seemed anxious to move on to his next duty as potential mayor of San Francisco.

Mayor Ed Lee faces competition from these under-funded, but united candidates. The three mayoral hopefuls came to San Francisco State University Oct. 13 to inform students on their unique strategy to take the mayoral position. Herrera, Schuffman and Weiss have formed a campaign labeled “Vote 1-2-3 to Replace Ed Lee” in hopes of elevating at least one ahead of the incumbent.

Six candidates are on the Nov. 3 ballot for mayor and San Franciscans will decide if the city will lend its leadership role to Edwin Lee for another four years, or if someone new will take the reins of a community in transition.

“From the start, we’ve been ignored and haven’t been considered viable candidates because we don’t have millions of dollars,” Herrera said.

Each voter will have the option to choose not only who they wish to take the office, but also their second and third choices. This voting process, known as ranked-choice voting, will be used for the San Francisco mayoral election. The method has already lead to hotly-contested races in the Bay Area, most recently in Oakland when Libby Shaaf become the city’s mayor in November of last year.

According to the Department of Elections, counting the ballots starts with first-place votes, eliminating the candidate with the smallest tally. The voters that chose that candidate get their ballots shifted to their second choice. This continues until the city has a winner with at least 51 percent of the vote.

Ranked-choice voting is what Schuffman, Weiss and Herrera hope to take advantage of next week in the election.

“[Our goal] is to get a larger portion of the vote,” Schuffman said. “Whoever makes it to the third round of voting will get the other two persons’ second or third share of the votes. That way, you can get a huge percentage of the vote even if you start with a low percentage. It’s really advantageous”

According to the latest campaign finance reports, Lee raised over $1.18 million in the last calendar year, an amount that is unfathomable to the three underdog candidates, who raised $56,742 in combined campaign contributions. Weiss sees the three candidates’ supporters as a sort of collective that can unite against Lee or, as she calls him, “the corporate giant.”

“We all have different reaches,” Weiss said. “They overlap, but we do have different networks that can come together and support one another so that we don’t have to fight each other.”

Lee’s donations, according to the same campaign finance reports, comes largely from individuals, but also includes many political action committees. The difference between Lee’s campaign contributions and the others’ is the amount of real estate individuals and development individuals that have contributed to his campaign for mayor.

“Ed Lee is a millionaire candidate with corporations backing him up, facing the other candidates who have people instead of money who support us,” Herrera said.

It’s likely that this major discrepancy in funding is the reasoning behind the majority of local news outlets labeling Lee’s run for reelection as “unopposed,” according to Herrera.

“At this point, it’s very embarrassing to be a world-renown, international city, and have this behavior of ignorance,” Herrera said of the lack of attention his campaign and others’ have received.