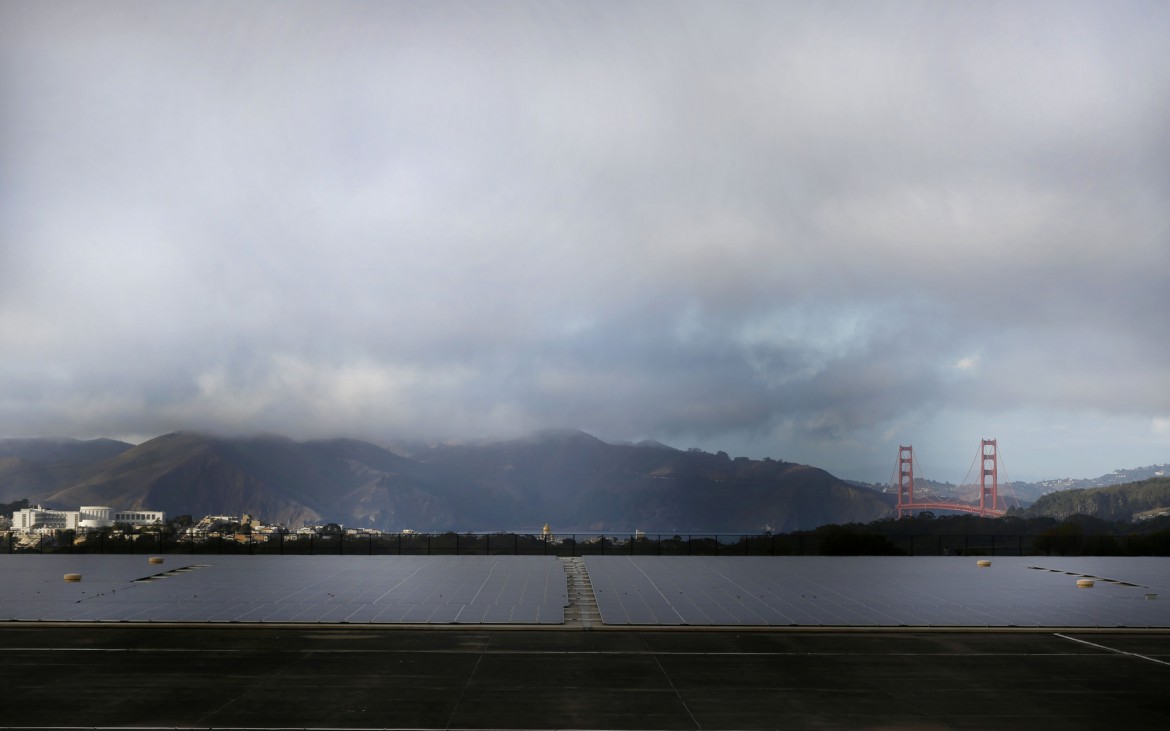 Solar panels sit atop Sunset Reservoir overlooking the Golden Gate Bridge and George Washington High School. The instillation is the largest in the city and provides up to 5 megawatts of power. It tripled the amount of municipal solar generating capacity upon completion in 2010. Photo by Emma Chiang

After 12 years of patience San Francisco may finally see the fruits of its environmentally conscious labor. Set to launch in spring 2016, CleanPowerSF is the city’s nonprofit program that will provide green and renewable energy to San Franciscans as well as challenge Pacific Gas & Electric, which provides power to 5.4 million Californians.

Since 2004, San Francisco has pushed a zero emissions goal. Seen in the forms of composting, plastic bag taxes and environmental improvements to public transportation, the city has aggressively attacked greenhouse gases and the climate change they produce.

Typically, citizens have always been offered environmentally friendly programs. Residents will be automatically enrolled in CleanPowerSF, which is overseen by the San Francisco Public Utilities Commission.

Renewable energy is “derived from resources that are replenished naturally” and can be replenished in an average human lifespan, according to the Environmental and Energy Study Institute. Such resources include biomass, geothermal heat, sunlight, water and wind.

The exact cost of CleanPowerSF’s renewable energy will be determined in the coming weeks, when SFPUC will choose from 52 eligible local renewable energy providers, not including conglomerates like PG&E or Shell.

Propositions G and H, which are set to appear on the November ballot, have the potential to determine the effectiveness of the program.

“The definition would change calling nuclear energy green,” said Kim Malcolm, director of California Policy and Programs at Local Energy Aggregation Network U.S. and former director of CleanPowerSF. “It would not allow the city to call all of its purchases green even though the state would consider it green.”

If passed, Proposition G would restrict San Francisco to only use one of three energy categories for its clean energy. PG&E would be able to label all three categories as green energy. Both propositions will require CleanPowerSF to inform its customers about the varying percentages of renewables included in their plan.

Proposition G, originally proposed by one of PG&E’s unions, is seen as a threat to CleanPowerSF. In response, Supervisors London Breed, John Avalos, Scott Wiener, and Julie Christensen fired back with Proposition H, which would require the city to follow state renewable energy standards, just as PG&E does.

While all supervisors support the CleanPowerSF program it has hit its fair share of road spikes. Until January, Mayor Ed Lee opposed the program, saying that the original $19.5 million in investments could be used for something more relevant, like city infrastructure, according to SFGate. The mayor eventually voiced his support, but even with his backing, the people stalling the decisions are SFPUC board members, which he appointed.

“There has been a rabbit hole of continual excuses between SFPUC and the mayor,” said Jason Fried, executive officer of the Local Agency Formation Commission, who has been monitoring CleanPowerSF.

“The goal isn’t what the program looks like on the first day,” Fried said. “It’s what it looks like in 10 years and where that puts San Francisco.”