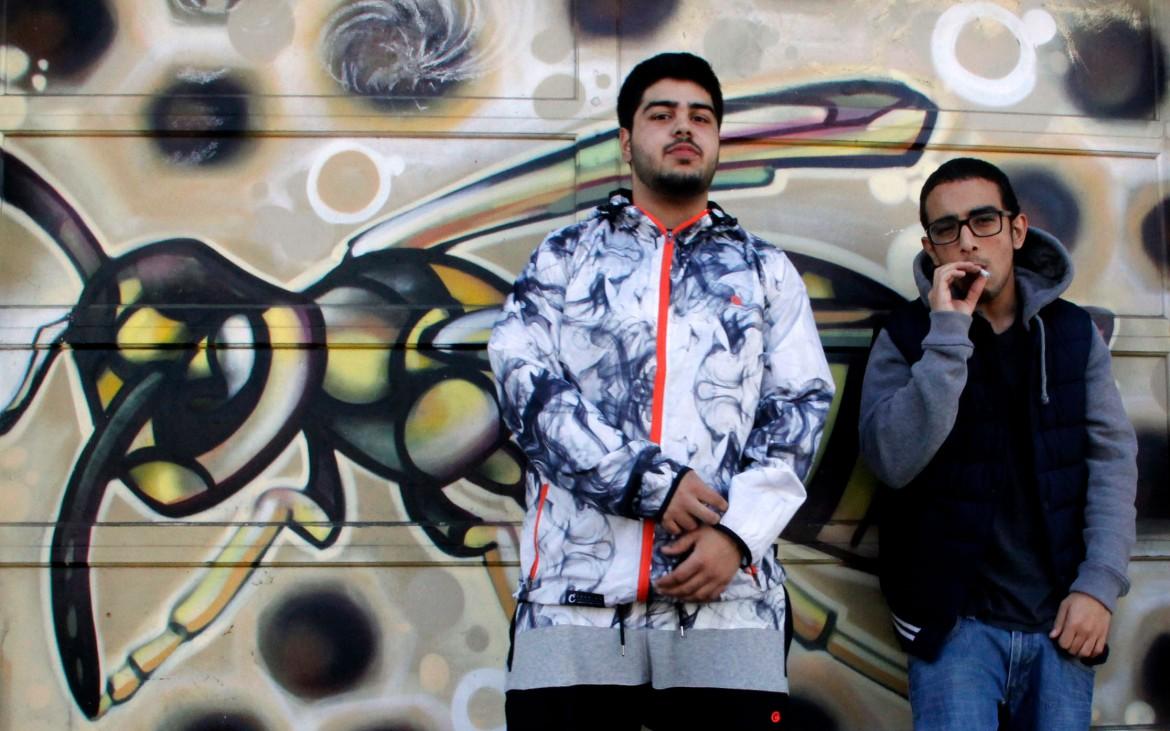 Haidar Abu al Hasan (left) and Ahmad al Sumait (right) co-founders of Above All Elements studios pose for a portrait outside of the Honey Hive storefront in the Sunset. Photo by Imani Miller

[dropcap size=”50px”]S[/dropcap]eated in front of a mixer to check the levels in preparation for his next recording session, Haidar Abu Al Hasan rocked back and forth in his chair in a room in San Francisco’s Outer Sunset District. The room, which Hasan rents from the Honey Hive Gallery, houses his recording studio, Above All Elements. His desk held the mixer, a 20-inch Mac monitor, two Rokit 8 speakers and was littered with wrappers, empty bottles and sticky remnants of spilled soda. The mess went unnoticed by the 21-year-old rapper-turned-business-owner as he threw on headphones and submerged himself in the music. He was home.

Although Hasan was born in the United States, he grew up in Kuwait. He moved back to his birth country at 17 to pursue a future in music he didn’t feel was possible in the Middle East. That future is looking more and more like a reality ever since Hasan partnered with his best friend Ahmad Al Sumait and opened their very own studio. In addition to creating their own music, the pair also record other artists in an effort to further their dreams in the industry.

Because of the religious influence on the government, Kuwaitis aren’t allowed to possess drugs or alcohol or own items that express political views– liberties Hasan has come to appreciate in the states.

“There are no nightclubs in Kuwait,” Hasan said. “Alcohol is illegal. It’s a whole different place.”

From a young age, Hasan immersed himself in the hip-hop culture– so much so that he was given the name “MC Element” by a mentor because he dabbled in varying elements of the genre. He has involved himself in graffiti, poetry and hip-hop dance. Hasan even created a mural inside the studio at the Honey Hive.

After high school, Hasan was unsure of what he wanted to do and questioned pursuing higher education altogether. His parents gave him the final push he needed to make the decision to study abroad in the states. After his top choice, Layola Maroumount University, denied his application, Hasan decided to study Broadcast and Electronic Communication Arts at San Francisco State University.

Basing himself in California was a priority for Hasan. He realized at a young age that there was no opportunity to grow in the hip-hop music industry in Kuwait.

“All I had in my mind was, ‘man, I’m getting out of Kuwait and I’m going to Cali,’ that’s one big step,” Hasan said. “It’s like I’m going the land of opportunity right now. This is where I can really count.”

Although excited for a rare opportunity, Hasan found it took a little over a year to adjust to his new life in America. Fighting off occasional feelings of homesickness, Hasan would frequently talk to friends back home and tell them about the wonders of the Golden State.

“One day I was talking to one of my friends on Skype in Kuwait, and I saw one of my best friends, Ahmad,” Hasan said. “It had been some months since we last talked. I told him he needed to come out here. I don’t think he would have been out here if I didn’t convince him that day.”

Hasan and Sumait met in the fourth grade after discovering they both shared a love for what their parent’s considered “the devil’s music.”

Like Hasan, Sumait dreamed of coming to the United States to pursue a career in hip-hop. While growing up in Kuwait together, the two developed their musical style and absorbed any hip-hop culture they could find, despite the risks. MC Element, Hasan, and Traphique, Sumait, would sneak off and hang around their close friend’s studio for hours out of the day. In school they spent class time writing one-liners and punchlines. Today, the friends consider each other brothers.

“The minute Element heard that I rapped he was someone that really believed in me and pushed me,” Sumait said. “For that I am always loyal to him.”

While Hasan was born in America, Sumait needed a visa from the Kuwaiti government to make his dreams of moving to San Francisco possible. To do this, he realized education was the platform that could get him to get to the states. His student visa allows him to live in America.

“There’s a small community for hip-hop and rap (in Kuwait) too,” Sumait said. “The mentality out there is if you want to make it you either have to be in California or New York.”

Under the conditions of the scholarship, Sumait is awarded a monthly salary to be a full-time student at SF State to study cinema. Sumait had to settle on the major because the Kuwaiti government wouldn’t support a major in theater, his first choice.

Sumait studies under an I-20 student visa, which restricts him from legally working in the country. When Hasan mentioned starting his own recording studio last year, Sumait was more than willing to help with the business endeavor– under the condition that his involvement remained under the table.

“He mentioned it in passing one night and of course I was down,” Sumait said. “When I got back from Kuwait after the break, he had all this paperwork ready, and then I just knew he was serious.”

Hasan believes owning his own studio was his destiny.

“I always knew I would have my own studio,” Hasan said. “I’ve saved all my life for this I just never really had the opportunity to make it happen until I got out to San Francisco.”

Hasan did his homework. After addressing financial options, and confirming Sumait as his new business partner, the next step was to find a sound engineer to run the studio.

“It said ‘I have a proposition for you,’” Thomas said chuckling. “At first I thought it was kind of weird because it was like I was being summoned by a guy I just met.”

Shortly after a brief meeting with Hasan, 20-year-old Thomas became the head engineer of the first studio in the Above All Elements Studios franchise.

The studio, unlike the sudden text, did not just spring up overnight; it was the result of a lot of hard work and sacrifice.

After cramped beginnings in their two-bedroom Daly City town home studio, the pair decided to upgrade to a more traditional place of business. They landed on the Honey Hive Gallery, a multi-use building which serves as a collective for local artists.

The partners have 24-hour access to their room in the Honey Hive and cater to at least two sessions per week on top of recording personal projects in their free time. They hope that by pushing their own projects created in Above All Elements, the quality of their sound and projects will encourage clients to book sessions.

Their short-term plans include getting a smaller booth to make the area around it more spacious for clients, along with other aesthetic changes like more art and new carpet.

Above All Elements plans to expand in the future with studios run by Hasan in San Francisco, Thomas in L.A and a third by Sumait in Kuwait.