The Plastic In Our Bay and the Scientists Expelling It 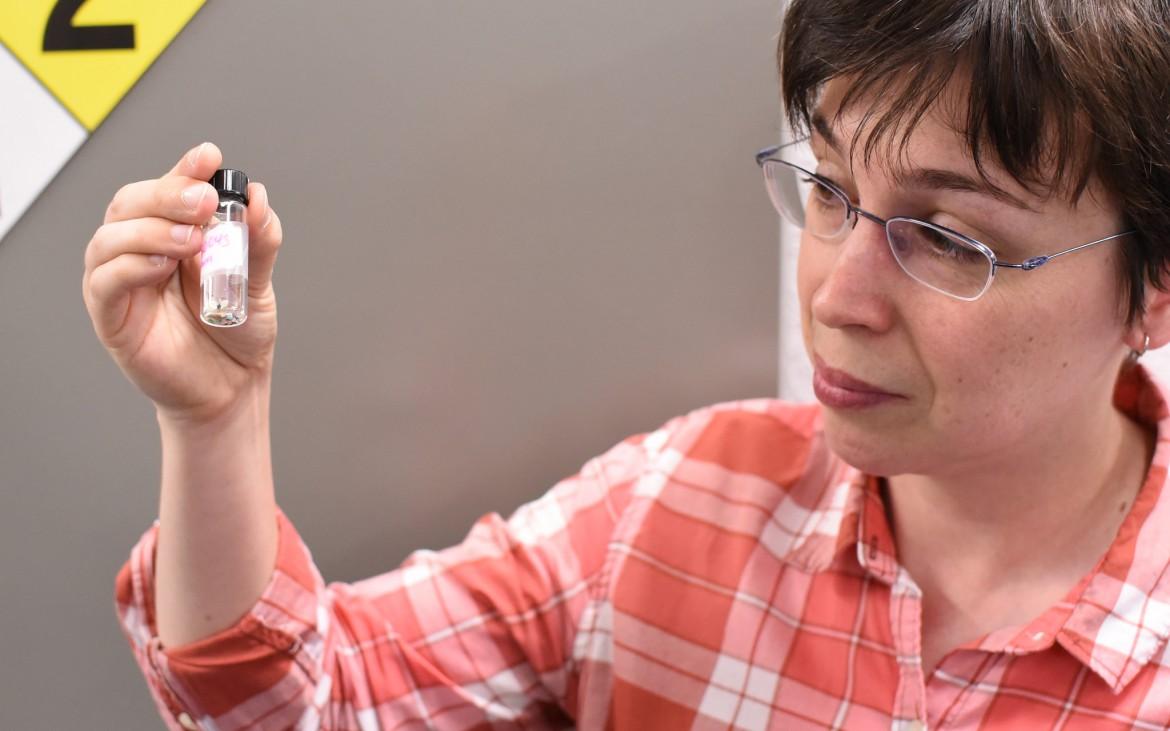 Rebecca Sutton, senior scientist at the San Francisco Estuary Institute, holds up a vial of microplastics collected from the San Pablo Bay. Photo by David Henry

[dropcap size=”50px”]K[/dropcap]aty Reid, a 25-year-old freelance production assistant, turned the knob to let the water run warm for a relaxing shower after a long day of work.

She stepped inside the tub and began to rinse her body. With her face wet and pores open from the steam, she squeezed her go-to facial cleanser on the tip of her fingers, rubbed it all over her face in a circular motion and left it on for the duration of her shower, all in part of her beauty regimen.

“It has a nice lather and smell to it, similar to a face mask,” Reid said.

One of its active ingredients, charcoal, works like a magnet to draw out blackheads. The product suggests it will unclog pores and smooth skin, which it does with the help of exfoliating microbeads.

Microbeads are round, brightly colored plastic particles found in facial cleansers and toothpastes. According to the Regional Monitoring Program for Water Quality in San Francisco Bay, the particles are found in 10 percent of personal care products. With a size of less than one millimeter in diameter, microbeads have been banned in California from all cosmetic products as they affect aquatic habitats and contribute to plastic pollution. The program found 3.9 million microplastics present in the Bay.

“I am upset at myself for using a product with microbeads in it,” Reid said. “The cleanser had some positive effects on my skin, but I am not comfortable with the ingredients environmental impact.”

Gov. Jerry Brown signed AB-888, a statewide ban on the sale of consumer products containing plastic microbeads in October. Set to go into effect in 2020, both the ban and the city of San Francisco are in conjunction to eliminate plastic waste.

The monitoring program funded Rebecca Sutton, a senior scientist at the San Francisco Estuary Institute, to lead a study in Fall 2014.

“There is a lot of monitoring of contaminants like polychlorinated biphenyls and mercury, but I do work on the emerging contaminants,” Sutton said. “Microplastics fall into that category.”

The institute’s research shows a daily average of 490,000 particles of microplastics are discharged from eight wastewater treatment plants in the Bay Area. Of that total, 17 percent is comprised of microbeads.

According to the Society for Conservation Biology, California’s state-of-the-art wastewater treatment plants cannot feasibly filter out microplastics because of their small size and buoyancy.

Microplastics include fiber from synthetic clothing, styrofoam cups and other large items fragmented by photodegradation, a process of breaking down material by light.

Sutton, with the San Francisco Baykeeper, a nonprofit organization committed to stopping pollution, conducted sample tests from a boat at the Central and South Bay by deploying a data-collecting device called a manta trawl.

Named after its resemblance to the manta ray, the device’s aluminum buoyant wings and mesh bag tail skims the water, trapping any particles five millimetres or smaller in the empennage.

Sutton’s contaminants were sent to Sherri Mason, a professor and researcher at the State University of New York, for sample research.

Mason rinsed the samples and categorized the particles by a wet peroxide oxidation process that removed natural organic material and left behind synthetic plastics, which she then placed in a microscope and carefully counted the miniscule pieces using tiny tweezers, in what Sutton calls a very time consuming process.

The results not only indicated that the most dominant form of microplastic pollution are fragments that may be derived from microbeads, but 52 other types of microplastics were also found in nine small prey fish.

“Wildlife mistake them for food and purposefully ingest them, which causes physical blockage in their bodies,” Sutton said.

According to 5 Gyres Institute, a nonprofit organization that advocates for the absence of plastics in the world’s oceans, microplastics are most commonly made of polyethylene and polypropylene. Neutrogena’s Deep Clean Gentle Scrub is estimated to contain 7,450 polyethylene microbeads in one product.

Sutton said plastic’s chemical nature can absorb persistent organic chemicals, like polychlorinated biphenyls which, according to the Environmental Protection Agency, have been known to cause cancer.

San Francisco joined the state’s coalition to ban microbeads to further the plastic reduction effort, much like it did for single-use plastic bags. After implementing bans on plastic bags in 2007 and 2012, the city saw a 34 percent reduction in plastic bag debris, according to Eben Schwartz, an outreach manager at California Coastal Commission.

“Trash in our environment happens despite our best efforts,” Schwartz said. “The best thing we can do is to not create trash in the first place so that it never has the opportunity to become marine debris.”

The San Francisco Department of the Environment is the lead agency of the Zero Waste Program, which aims to complete its goal by 2020. Guillermo Rodriguez, a policy and communication director at the department hopes plastic reduction becomes a cultural change.

“Part of our zero waste strategy is to make San Franciscans comply with our laws by changing their behavior,” Rodriguez said. “We take every excuse off the table to get people to do the right thing and since the ordinances, we’ve seen significant compliance.”

Garnier, the cosmetic brand of the French cosmetics and beauty company L’Oréal, echoed environmentalists concerns over microbeads by deciding to eliminate the plastic pollutants in its scrubs by 2017. According to the company’s plan for sustainable development, they are looking for natural alternatives to replace microbeads.

“I would have not bought it if the word microbeads was labeled on the packaging,” Reid said, who used Garnier’s Clean + Blackhead Eliminating Scrub for Oily Skin. “But I think it is a great step for them to ban it from their products.”