Fighting for the Spotlight 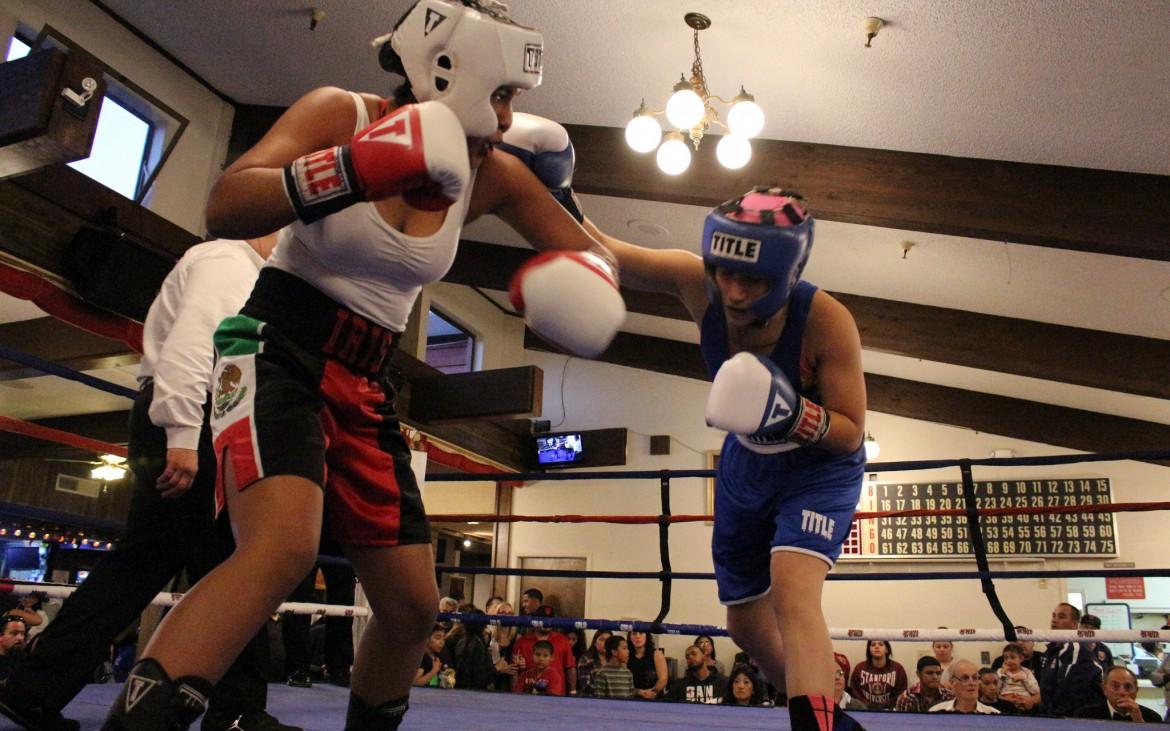 [dropcap]T[/dropcap]he crowd crammed into every corner of the second floor of the Moose Lodge in Pacifica to witness the storm of jabs, hooks and crosses that ensued on a makeshift boxing ring. The air was thick with sweat and the room smelled like the bottom of a gym bag. Fighting with bloody noses, gloved fists and bundled up hair, 30 women paired up and threw down in front of a roaring crowd and a pay-per-view audience for the fifth installment of an all-female, all-amateur boxing tournament called Beautiful Brawlers.

The only screams heard over the fans cheering in the face of combat were those coming from the fighter’s corners. Trainers shouted commands to their wards as the women absorbed punishment and punches that came too fast and too often to count. Sometimes the fighters followed instructions and at other times they succumbed to the cacophony of cheers and flying leather that came their way, making it near impossible to follow specific instructions.

Beautiful Brawlers is the brainchild of trainer, manager and former fighter Blanca Gutierrez. She created the tournament in 2011 to give women fighters a stage and an opportunity to compete at an elite level against fellow top amateurs, as well as putting them in the spotlight to get the recognition she knows they deserved. For the first time in the history of Beautiful Brawlers an added bonus came for three young competitors; a World Boxing Council trophy in the form of an authentic green and gold champion belt. It was also the first time that a WBC belt was awarded to an all-female tournament.

“We started it to try to match girls who couldn’t get fights,” Blanca Gutierrez said. “Then it got to the point where girls wanted to come to us to fight, but we tell them ‘If you want to fight, it has to be the best versus the best.”

Now as WBC women’s heavyweight champion, Salazar helps train her niece Ari Borerro, who is also a heavyweight fighter. Borerro has only two fights as an amateur because of the lack of available competition, but Beautiful Brawlers was able to provided her an opportunity. With her aunt in her corner, she squared off against Alexis Coultier, losing a close three round decision.

Aside from Borerro, one of the most anticipated bouts on the card featured 15-year-old junior Olympic gold medalist Lupe Gutierrez, who won the world championship tournament in Taiwan for the 132-pound division over the summer. Lupe Gutierrez, a winner of 40 amateur bouts, squared off against Erika Sanchez, another standout amateur, for the WBC trophy.

The fight was not easy against the ever-throwing Sanchez. They traded hooks at the center of ring in the first round. They threw quick, rapid-fire shots but then suddenly Lupe Gutierrez quick-stepped to Sanchez’s left, changing the angle and flow of the punches. She caught Sanchez off-guard with the position change and began to fight from a further distance. Lupe Gutierrez, the longer fighter, stuck her right-jab in Sanchez’s face and kept her left hand high to guard her own face and chin.

Sanchez continued to bull Lupe Gutierrez toward the ropes but Lupe Gutierrez kept her composure and did not fold under the pressure of Sanchez’s assault. After the round both went to their corners and made up their minds how they would fight the rest of the contest. The second round was a duplicate of the first but Gutierrez began to time and counter punch Sanchez who continued to throw wide punches.

The fight seemed close at the start of into the third round and Lupe Gutierrez received warning from the referee to keep her head up during the exchanges. Lupe Gutierrez then became the aggressor and forced Sanchez back to the ropes.

Lupe Gutierrez’s corner, which never stopped shouting and must have sensed the fight was up for grabs, began to plead to their fighter, “Now Lupe go! Now Go!”

The bell rang, the fight ended and the crowd showered them with cheers. Lupe Gutierrez came back to the corner and after her trainer removed her mouthpiece she complained about a pain in her stomach as she held her hand at her side. Lupe Gutierrez must have known it was a close fight because as she and Sanchez came to the center of the ring to await the decision, she took a knee and bowed her head. After the decision was announced the referee raised Lupe Gutierrez’s hand in victory and another trophy was added to her growing collection.

“I’ve won a lot of titles but it doesn’t really compare to this,” Lupe Gutierrez said. “I mean this is a WBC belt and this is my first one ever. I think I have more to come as a pro but as an amateur it feels great to have this one.”

Jill Diamond, co-chairman of the women’s division for the WBC, said that the sanctioning body came on as a supporter for Beautiful Brawlers because of its “great interest in nurturing young athletes.” She also mentioned that the WBC has a lot of respect for Blanca Gutierrez who is “a creative and articulate spokesperson of the sport.”

Diamond explained that a possible reason these young ladies were so eager to win a WBC belt is because the history of the organization and what it represents.

“The WBC is known for having the greatest champions and a relationship with its champions,” Diamond said. “It’s the strongest of the organizations and the titles have been called the ‘Ali Belt’ and later the ‘Tyson Belt.’ It’s prestigious.”

Nonetheless, Blanca Gutierrez said that she would never “cheapen” the belts by awarding them to women who did not stand-out as elite, world-class amateurs.

“It’s the kind of thing where it’s going to create a bigger situation for female fighters,” Blanca Gutierrez said. “And the WBC is the best federation in the world. So to be connected with them is not only a blessing, it’s just the greatest thing that could have happened to the Beautiful Brawlers.”