A Yawn Worth Yelling make noise in local scene 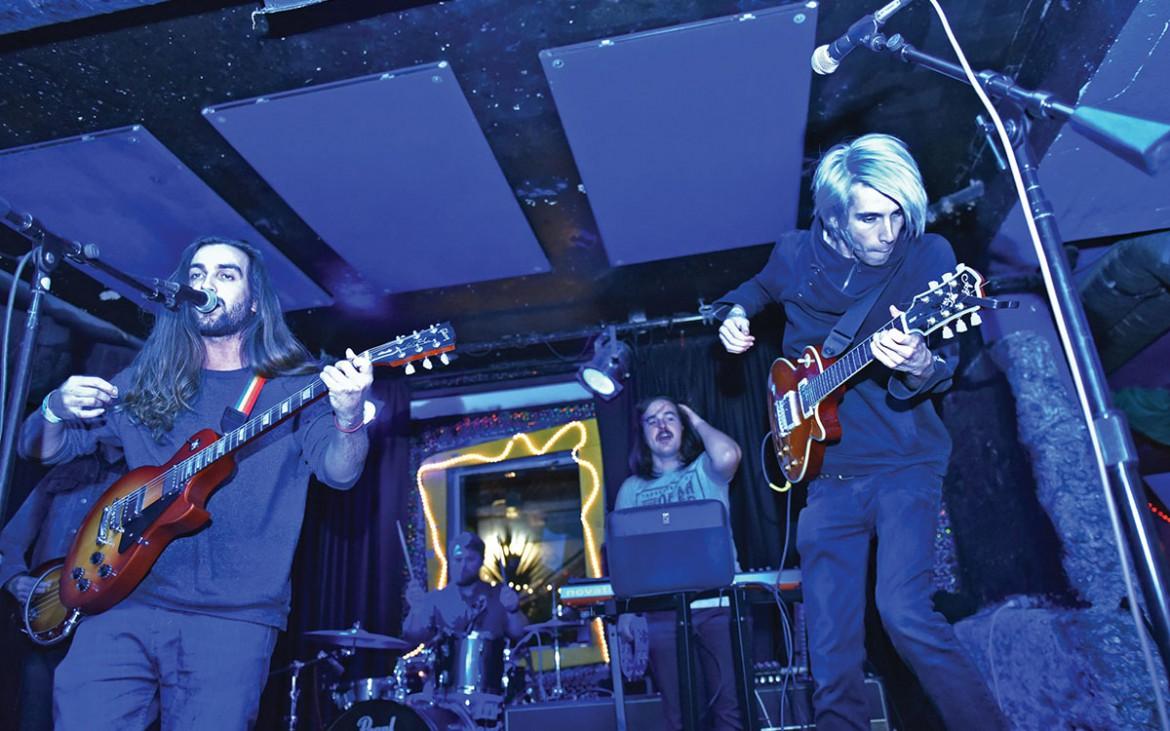 Brayden Deskins, right, and Tyler Boyd, singers of the band "A Yawn Worth Yelling," perform during their "Play Pretend EP Party" at Bottom of the Hill, a club at 17th Street in San Francisco Sunday, Nov.15. (Qing Huang/Photo)

Brayden Deskins (right) and Tyler Boyd (left), singers of the band A Yawn Worth Yelling, perform during their Play Pretend EP Party at Bottom of the Hill. Photos by Qing Huang

Infectious basslines thumped below warm vocal and guitar melodies, while drum beats begged for you to tap along to their off rhythms. The sound of Bay Area alternative rock band, A Yawn Worth Yelling, swiveled into the indie pop realm and brought a spot of sunshine into the oncoming winter with the release of their new EP, Play Pretend.

The four-piece group, sometimes six-piece when performing, features Brayden Deskins on guitar and backing vocals, Johanness Heine on bass, Tyler Boyd on lead vocals and guitar, and Taylor stover on drums in studio, but during live performances the band recruits Rober Tanali and Ryan Powell. Although the latter don’t take part in any of the writing or recording process, the band still considers them important components of A Yawn Worth Yelling. The core four have known each other since high school, having grown up in the San Jose area, and have released five records – two full lengths and three extended plays.

Their latest piece, Play Pretend, was a developmental process. A year in writing, and approximately 20 songs later, the band was able to produce a five-track record that contains what the band considers their best work yet.

“The era of the bad stuff was everything you’ve heard until now,” Boyd said half-jokingly as his band mates giggled in the background.

Boyd describes their first LP’s, Hieme Bellum, recording process as a phase where the band would write songs and record them as is. There was minimal refinement, according to Boyd.

“There were songs in there that I, as the drummer, had only practiced a couple of times, and we went into the studio,” Stover said. “There were songs I didn’t really remember my parts on, when I was in the studio. I sort of made the parts up.”

This process was hit or miss for the band. “Sometimes it turned out great,” Stover said, as he explained they’d done something similar on their first EP 1,000.  It turned out better than they expected, although he admits it wasn’t the best approach for their first LP.

“I would agree that was the ‘bad’ stage we needed to get out of our system, and thank god we did it early on,” Stover said.

Their previous work was all self-recorded, and not always planned, but Play Pretend was the result of a new approach. They had a set plan: to have five songs that worked well together, and bring in a producer to get an outsider perspective on their music.

The band had to ameliorate their sound a little more this time around. Since they were not self-recording, they no longer had the leisure of going through endless revisions and re-recording. Having a limited budget and only specific days allotted, four to be exact, in a studio demands a quicker process of polishing the sound, according to Stover.

Having a producer this time around also made a difference in the creative process as well.

Although there were times the producer blocked some ideas that the band was keen for, his expertise and instruments were overall beneficial and essential to the Play Pretend production process, according to the band.

“(His input) made a huge difference on the impact of the song,” Stover said. “Not to mention the gear, and his ability to record stuff really quick just saved us a lot of time and money, and made us sound better than we’ve been able to ever make ourselves sound.”

Along with its release of Play Pretend, the band’s other big move this year was a literal one, to Los Angeles. They hope this move will help them break through in the industry a little more.

“We figure: it’s the jugular of the music industry, and we want to get our foot more in the door,” Deskins said.

Although they admit LA has a lot of opportunities, they don’t think the Bay Area is a bad scene to be in, just different. They also like the appeal that a lot of their favorite bands have broken through from LA.

Stover adds that the band was part of a publishing company that had all of their bands, including A Yawn Worth Yelling, play in LA for executives this past summer. Since then, the band has had many opportunities pop up, such as acquiring a manager with MIH Entertainment who is based out of LA.

After signing to MIH, they began to receive more opportunities, according to Deskins. Trips to Los Angeles became routine, and to avoid the constant commute, the band decided to give the city a chance.

“(There is) nothing wrong with the Bay Area at all,” Stover said. “We want that to still be our hometown, and we want to still have kick ass shows and all that.”

As for their plans for the future: schmoozing with the Kardashians. The band lives 5.4 miles away from the famous tv-family. “We can see it from where we live, and we are hoping to get an in with Kanye,” they said jokingly.