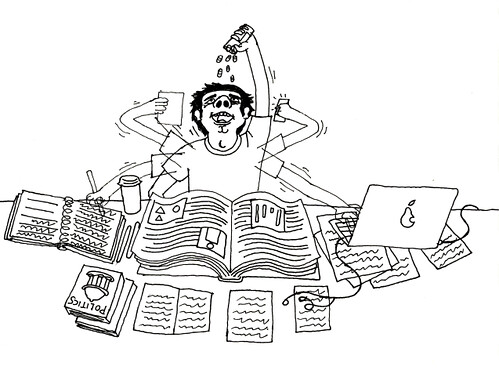 Twenty one year old Suzanne* is your average SF State student. She goes to class, goes to work, studies, and finds time to go out with her friends on the weekends. Suzanne is a business major, and, like many students, she struggles with a busy schedule. Sometimes, she feels like she needs a little help and more time. Three years ago, Suzanne was a freshman and all she needed to do was ask her roommate for some Adderall. Her roommate, diagnosed with Attention Deficit Disorder, would frequently sell her prescribed medication to other students. It was the miracle drug that made it easy for Suzanne to focus. Studying for an exam in Macroeconomics suddenly didn’t feel so difficult and writing a ten page paper in one night didn’t feel so stressful. The secret was in the pill. The required texts were more interesting and she was doing well on all her exams. What Suzanne didn’t plan for was the way Adderall would make her feel.

“I have high blood pressure, and, when I would take Adderall, I could feel that my blood pressure was raised and that my heart was pounding. I always got really cold. I didn’t eat and didn’t sleep. I don’t do it that much anymore because I do have high blood pressure. I know that it’s really bad because you can actually feel how bad it is. Your heart is racing the whole time and you can’t calm down,” Suzanne says.

“People usually do it situationally,” explains Albert J. Angelo, a health educator from Student Health Services at SF State. “They’re doing it because of finals coming up or they feel like they need to pull an all-nighter or they are taking some kind of test that they really need to concentrate on.”

According to a 2010 study conducted by the American College Health Association, eighty-four percent of students report feeling overwhelmed by all they had to do during the year and forty percent feel overwhelmed in just the last two weeks, maybe a reason why many turn to drugs like Adderall and Ritalin.

“One time when I took it I had to write a ten page paper for an ethnic studies class,” describes SF State student Aria*. “I was in the annex and I took half a pill of Adderall with a Monster. I was up for twelve hours in the annex writing. It was really helpful. It kept me motivated and helped me focus on ideas because my mind often scatters.”

“A lot of people like to take it with alcohol or snort it for a stronger effect,” says SF State student Brianna Brostoff. “I think it’s crazy, since I’ve heard stories about people getting completely out of control on it.”

For ADD patients, Adderall has a calming influence but for those who are not diagnosed, the drug does just the opposite. Adderall and Ritalin are stimulants meaning they can temporarily improve mental or physical function. Common short-term effects include high anxiety, hypertension, insomnia and loss of appetite. One of the major dangers of the medication is that it is highly addictive says Dr. Cesar Banda, a family practice physician from Sacramento.

“It’s the same category as cocaine or morphine because it’s highly addictive,” explains Banda. “They [users] could develop tolerance meaning they would need a higher dosage to get the same result.”

“I know that it’s addictive, that’s why I use small amounts,” says SF State student Brian*. “The only amounts to get what I need to get done when it comes to studying. I use it very, very sparingly. I will not take it every day or more than twice in a week except for finals week.”

Other possible outcomes when taking Adderall can include heart complications, dependency, severe depression, seizures, aggressive behavior and even psychological problems such as schizophrenia. There have even been cases of sudden death with Adderall users who had previous heart abnormalities.

“Side effects depend on the person’s body,” explains Angelo. “If you’re taking medication without having a medical exam, you never know what could happen, especially if you’re taking some other medication or if you’re using drugs or alcohol. It could be based on what your biology is to begin with. Anything’s possible.”

The price of Adderall tends to run between five and nine dollars per pill, but can sometimes cost a lot more during finals or midterms when Adderall usage tends to peak on college campuses. Brian describes his usage as seven and a half milligrams once or twice a week, and, during finals, thirty milligrams for ten days.

“It feels euphoric at first and it helps you concentrate on something such as reading that’s very monotonous where your brain ventures off onto something else. It helps you focus on the subject at hand,” he says.

“Its [Adderall] street value is very high, especially in this area where drug culture is so prevalent,” describes an SF State student diagnosed with ADD, who asked to remain anonymous. “Initially, I sold to whomever wanted it, but in more recent days I’ve only sold it to help out friends who needed it for studying purposes. My prescribed dosage is thirty milligrams XR. I’m pretty sure it’s the highest dose available and it costs me, I believe, almost nine dollars a pill. I’ve actually sold it for less most of the time, usually six or seven dollars, but around finals time, about ten dollars each.”

Adderall sales have increased 3,100 percent since 2002 according to the Centers for Disease Control and Prevention. It’s becoming easier and easier to obtain a prescription for Adderall, and it’s common to hear of students going to doctors complaining of being extremely distracted and struggling to complete tasks in hopes of getting their own prescription for Adderall. A 2009 NPR.com article estimates that 25 percent of college students have used “study drugs” (Adderall and Ritalin), but the American College Health Association reports that only about 6 percent of college students are actually diagnosed with ADD.

Taking Adderall without having been prescribed the medication and without having been physically examined by a doctor can lead to devastating results, all for a good grade. Bad grades happen, but there are always other options—retake an exam, extra credit or even retaking the class. Bad grades can be changed but repercussions from abusing Adderall could be permanent. So, is it worth it?

*Students wished to only use their first names to protect their identity.