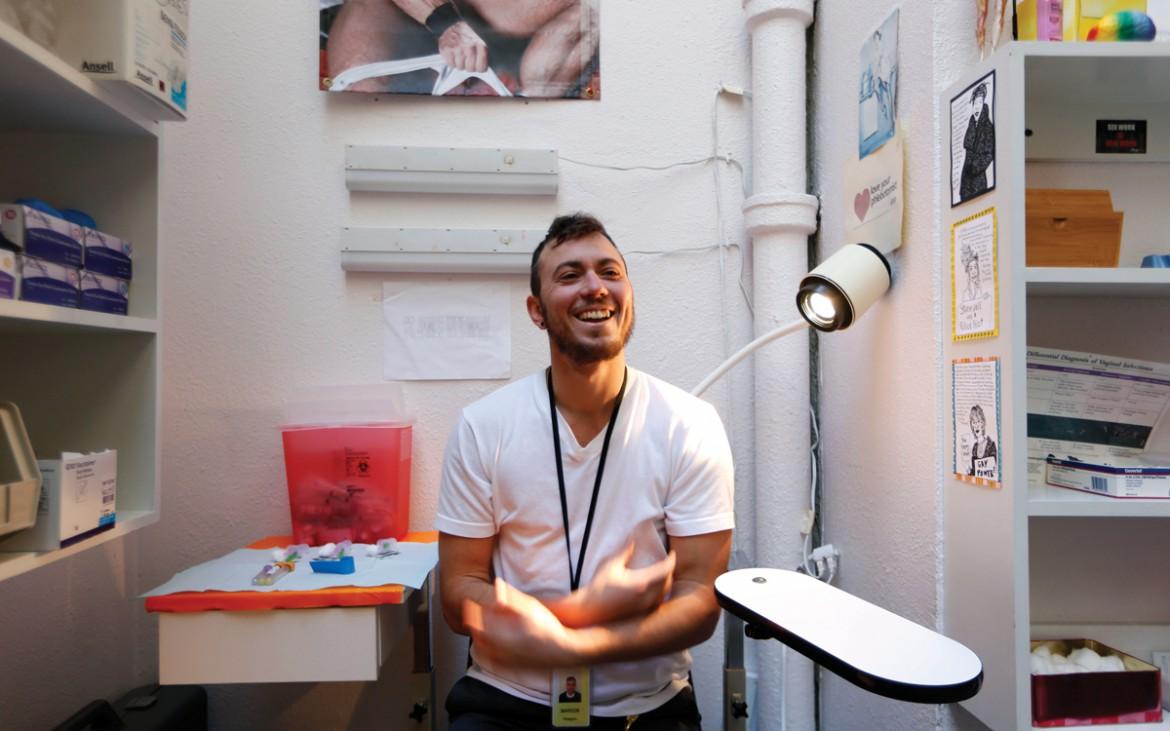 Marion Pellegrini, core staff member at St. James Infirmary, poses for a portrait in the lab where he draws blood for various tests for patients. The clinic provides healthcare and social services for current and former sex workers of all genders and sexual orientations.

Marion Pellegrini, core staff member at St. James Infirmary, poses for a portrait in the lab where he draws blood for various tests for patients. The clinic provides healthcare and social services for current and former sex workers of all genders and sexual orientations. Photo by Emma Chiang

There’s no sign on the door. One has to be told about the place to know it’s there and, even then, they’d probably walk past it a few times before realizing they had reached their destination. The clinic is discrete; its whereabouts spread mostly through word of mouth. Its modest front door leaves little hint to what goes on beyond it. The work St. James Infirmary does for the community it serves is shielded to ensure that work can continue, which is partly due to the taboo nature of St. James’ clients’ jobs.

St. James is a peer-based health clinic for sex workers located on Mission Street in the South of Market neighborhood. Pretty much all of its staff and all of its patrons are either current or former sex workers – that is, they have either stripped, prostituted or done some job that falls under the “sex work” umbrella, if not a number of jobs involving erotica. The clinic also services the immediate families and primary sexual partners of sex workers. St. James is the only for-sex workers, by-sex workers free health clinic in the country.

But the clinic is moving, and its staff is not sure where. The SoMa building it has been in for the past 13 years of its 16-year-history is up for sale, and a new lease will not be granted. Moving an operation like St. James is a sensitive undertaking, one that poses big problems for the clinic, according to executive director Stephany Ashley.

“Across the city right now, private landlords are not too motivated to rent to non-profits,” Ashley said. “The real estate market right now is money, and most property owners that own commercial spaces in San Francisco are trying to see how much money they can make. Renting to a peer-based clinic that provides social support services for a community in poverty is not gonna make them a lot of money.”

The move also has St. James’ staff worried about client trepidation. Ashley said that’s because some of the clinic’s current visitors might not go to St. James if it moves to a different neighborhood.

“Here, we are right equidistant from Sixth Street and 16th Street,” Ashley said. “If you think about those two corridors, there’s a lot of folks that would access our services there. And this is a space that is accessible from those places. It’s close enough that you could walk here in 10 minutes, but also kind of far enough to where you could get a bit of distance from some of that.”

Dr. Pratima Gupta is St. James’ medical director. She started volunteering at the clinic while doing a fellowship at the University of California, San Francisco in 2005. Two years later, she stepped into the clinic’s medical director role, which is also a volunteer position. Dr. Gupta echoed Ashley’s unease about the move.

“In terms of our clients and the participants who receive our services, we’re seeing concern about the safety of some of the places we’re looking at,” Gupta said.

Proposed locations include spaces in the Tenderloin and Mid-Market neighborhoods, both of which have reputations, earned or unearned, for being dangerous. Neighborhood safety concerns could mean increased police presence around the clinic, which is bad news for many sex workers. According to Gupta, overinvolvement with police could jeopardize the safe-space atmosphere St. James wants for its patients.

“We strive to provide non-judgmental healthcare for sex workers and their families,” Gupta said.  “For somebody to fear coming to our clinic because they fear persecution due to our proximity to law enforcement would really be a detriment and completely go against our mission.”

Law enforcement’s interest in St. James’ operations may seem like a given. After all, prostitution is illegal in San Francisco. It’s also one of a number of jobs that can qualify a man or woman for St. James’ services.

Tony Flores is an inspector sergeant with the San Francisco Police Department. The 33-year SFPD veteran is currently assigned to the human trafficking division of the department’s Special Victims Unit, where he mostly focuses on commercial sex and forced labor. Flores said having institutions like St. James actually makes his job easier, but not necessarily in making arrests.

“We focus on victims and victimologies and having victims taken care of,” Flores said. “The only way we can do this is by understanding the victim’s needs. This is where (St. James) and all the other NGOS and non-governmental agencies or victims services will actually assist us in getting those victims their wants and needs.”

Both Ashley and Flores said they have recently sat on community panels together, discussing ways to better serve the sex worker community. Flores said he isn’t a stranger to working with sex worker advocacy groups in an effort to better the lives of what he views as an exploited demographic. The Standing Against Global Exploitation Project was a San Francisco nonprofit the department worked with closely. The organization has since folded, and Flores said losing SAGE meant the department had lost “some really good advocates,”  and he doesn’t want to see the same fate for St. James.

As for its medical offerings, Gupta said St. James is no different than any other health clinic. According to her, St. James’ peer-based approach to serving sex workers is really the only thing that makes it unique.

“We do offer HIV and STI testing like any other clinic,” Gupta said. “But the rate of STIs that we are picking up are equivalent to other (demographics). They’re not any higher”

They treat people for coughs, colds, rashes and high blood pressure. St James offers free therapy and case management on Monday mornings, and hosts needle exchanges every Tuesday afternoon. These scheduled events appear on St. James’ online schedule well through the clinic’s projected early January move-out date, underlining an intent to being on call for a community in need.

The clinic is both publicly and privately funded. St. James gets over $250,000 annually through various contracts it has with the City of San Francisco, according to Ashley. Private donors also help fund the clinic’s operations. Ashley said those private donations have increased since news of St. James’ displacement became public in October.

“We hit our $25,000 mark in three days,” Ashley said, referring to a recently-launched GoFundMe campaign. “I was surprised by how quickly it happened. But I was also surprised by the reach of it.”

Ashley said a lot donations came in from people who she had never heard of before, people who don’t have any direct connection to St. James or the sex industry that she knows of. Other names, she said, were more familiar.

“We got a lot of messages saying, ‘Oh my gosh, one time St. James really saved my ass. Thank you so much, and here’s $100. Hope you land on your feet,’” Ashley said. “I think there are a lot of people who are just tired of hearing that things are closing and were like, ‘Alright. Let’s rally. Let’s keep something here. These services are important.’”