Hotel of a Different Feather 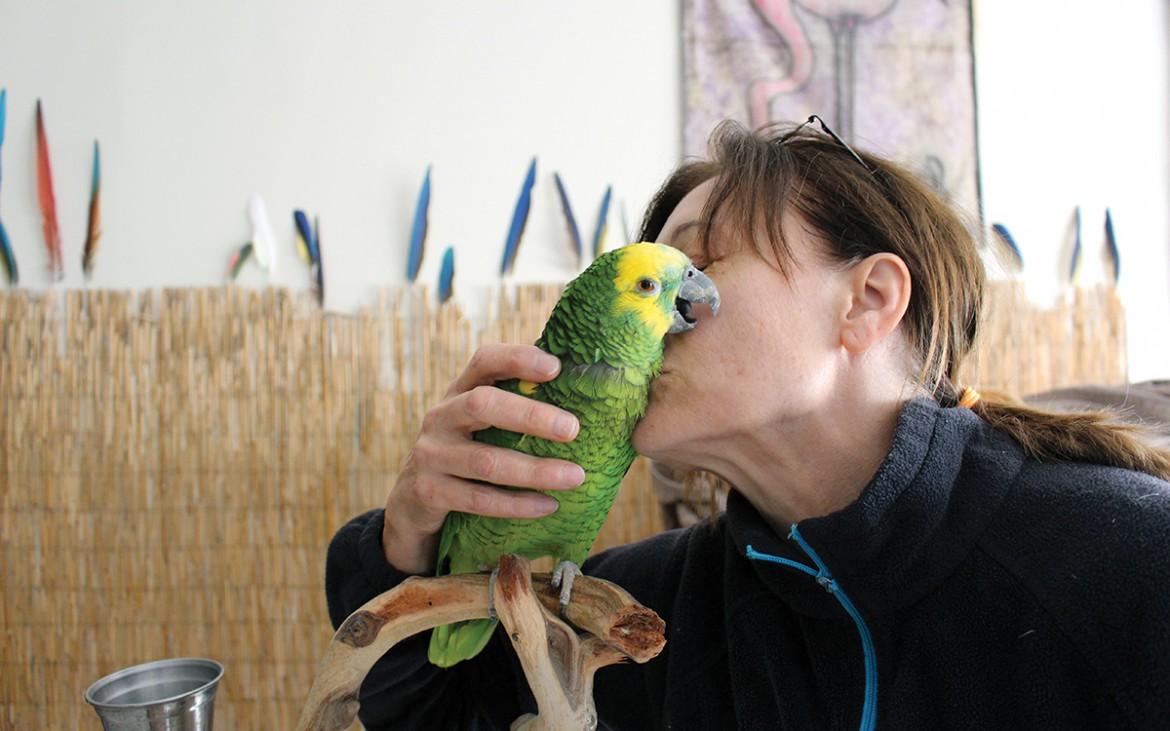 Birgit Soyka, owner of the San Francisco Bird Hotel, kisses Amy, one of the hotel’s guests. Photographs by James Chan

When entering the San Francisco Bird Hotel, the first thing to hit you is an unexpected wave of madness-like volume palpitating your eardrums. The echoing of calls, mixed with the repetitive off-keyed songs of exotic birds, colored the hotel. The constant beating of wings against each bird’s chest produced a low pitched thunder that served as a bass note within the chaotic tune the birds created. Cages of different sizes and colors, named after prominent wonders of the world, lined the walls of the bird hotel.

The San Francisco Bird Hotel was established in 2006 out of the home of bird owner, Birgit Soyka, in San Francisco’s Sunset District. Soyka, a tall, gentle spoken, middle aged woman holds two passions in her heart: birds and motorcycles. Her blue eyes continually flickered when she spoke about her love for birds and her journey of building the bird hotel.

The bird-lover attests that she had a very adventurous life before opening the hotel. Soyka said she could have never fathomed ending up in a business where she had to live permanently, but her love of birds convinced her to give up the nomad lifestyle.

“This is kind of like settling down,” Soyka said. “I cannot go on vacation right now, that’s for sure.”

Soyka, a native of Germany, found herself transferred to San Francisco from Miami for work in 2004 and quickly needed to find a permanent home for her three beloved Amazon birds. At the time, The Caged Inn was San Francisco’s only bird-friendly boarding service. The Inn was run out of a woman’s home in Noe Valley. Between 2004 and 2006, Soyka’s feathered companions comfortably resided in the Noe Valley shelter until the inn’s owner fell ill and needed to close down her bird hotel. Soyka informed the inn owner that she would like to take her business over.

The Caged Inn’s owner immediately gave Soyka 10 of her customers, along with her extra bird cages. Soyka began constructing the early stages of her soon-to-be bird hotel. She began posting flyers throughout the city, advertising that she would take in birds.

In October of 2009 Soyka, a full-time director of global accounts in San Francisco, was laid off. She later decided to quit completely.

“That was the happiest day of my life,” Soyka said. “The bird hotel was at the cusp of either being a hobby or a business.”

By 2013, Soyka got rid of all of her home furniture and added more cages to furnish the space.
“By the end, there was only a bedroom and a bathroom that were bird-free,” Soyka said. “Even the kitchen had birds. I had a breakfast area that was filled with only birds.”

Throughout the year, Soyka watched her hotel flock grow to be larger than her home allowed.

“It was a neighborhood,” Soyka said. “You cannot do that sort of thing here.”

After eight years of her personal home serving as a temporary bird hotel, Soyka could not believe how many bird owners came to drop off their beloved, exotic pets. She soon realized that the size and location of her transformed home-to-hotel space was no longer fitting. She found herself at a crossroads of either closing the hotel completely, keeping the guest occupancy at a smaller number or putting everything she had into the business.

Soyka flew her old coup in January of last year and signed the papers on a new unit on the corner of Utah Street in South San Francisco that would serve as a more comfortable nest for the San Francisco Bird Hotel. Birds flocked from throughout the Bay Area to stay at the new 5,400 square foot location and, in December alone, the hotel housed 95 birds.

The San Francisco Bird Hotel now serves customers from Marin County to Gilroy, with more than 780 bookings in 2015 so far.

“They treat their guests as individuals and really cater to their needs and personalities,” O’Connor said.

Soyka said the cage amenities are not the only perks of booking at the San Francisco Bird Hotel. Guests are able to customize their daily meal plans and enjoy the hotel’s entertainment program.

The hotel’s entertainment program includes listening to music, dancing and participating in “flight hour” for guests to stretch their wings.

“We let the birds out in the play area to hangout and listen to music,” Soyka said. “They all have rhythm and a feeling for music.”

As soon as the radio settled on a clear station, Green Day’s “American Idiot” blared through the hotel speakers, and the dance party was on. Birds were shimmying, bouncing, poorly twerking and squawking along to the catchy lyrics of the 2004 punk rock single.

A white cockatoo named Triton wowed the crowd of other bird guests when his yellow mohawk flared up as he headbanged to the high-energy song.

Dancing isn’t the only party trick Triton can impress on fellow bird hotel guests. As an avid talker, the cockatoo repeatedly shouts, “go get me a beer, go get me a beer,” to anyone who walks or flies by.

Cheryl Tamburri brought Lelilani, her Umbrella Cockatoo, to the San Francisco Bird Hotel for a week-long stay in May. She said the search for a safe, bird-friendly care service while she vacationed was “traumatizing” until she found the bird hotel. The vacation seemed to be more nerve wracking for the owner rather than the animal.

“Like sending my kid off to camp for this first time, I probably called too much,” Tamburri said. “But I received daily 411’s plus pictures of my Cockatoo.”

This year has brought the bird hotel 788 bird bookings.

Soyka said her main business goals are to create a clean, roomy, beautiful space for birds, accompanied by trustworthy and reliable service. She believes she has been successful thus far in creating a bird paradise.

“Some birds don’t want to go home after their stay, they won’t get out of their cage,” Soyka said.