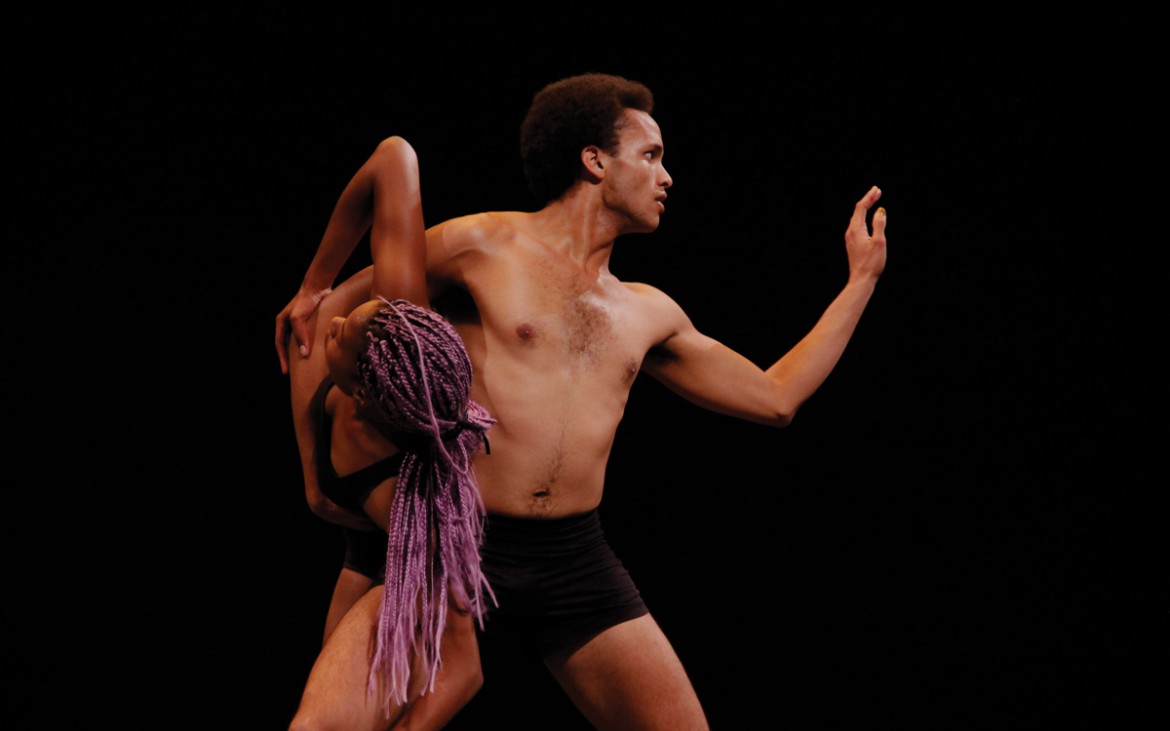 David Spain, left, and Dominique Turner, right, performs during the showcase competition in the McKenna Theater. Photography by Imani Miller

Senior Matthew McKines III’s 19 student dancers entered the stage, clad in all black and bearing an uncanny resemblance to the models in the second season of Kanye West’s Yeezy fashion show. They performed a ballet piece that McKines choreographed in the course Dance 461: Advanced Choreography. The piece, titled “Royals,”  is a story of love, loss, battle, betrayal and overcoming it all, according to McKines. The dancers came out with their arms framing their heads like busts in a museum casing, forming perfect right angles at their elbows on either side. They held their shoulders back and pushed their chests out, strong and regal. As the dancers moved through eight counts and the piece came to an end, the anxiety on Mckines’ face never faltered.

Mckines is competing for a spot in this year’s New Moves Choreography Showcase titled “Emergence” against 13 other choreographers. The 14 choreographers have gathered their dancers in McKenna theater to compete in a final showing of their pieces for a coveted spot on the paid by patron program.

The showcase usually serves as a capstone course and states in its syllabus that each choreographer is to create a piece that will be performed on stage in a showcase that patrons of the theater come to see every year. For the first time in the history of the showcase, the department is not letting all students enrolled in the Dance 461 course perform their pieces in the program that patrons pay to attend.The changes have somewhat shifted the energy of the program and have caused the morale of the group to diminish, according to dance students.

“It’s just made it a more stressful process because now there is a chance that all of this work will have ultimately been in vain,” McKines said.

“Each teacher that I have, independently of one another has addressed their classes that have nothing to do with New Moves on the fact that they can tell that their general student body is like depressed, just down in the dumps, just upset and unable to focus, and things are slipping,” McKines said.

This year, the department has limited the showcase to seven pieces — a huge shock to the student choreographers. There will be three main shows where patrons pay to attend with the chosen seven pieces being showcased. All of the remaining choreographers pieces will be shown at a Saturday matinee performance for free on December 5. The new director of the combined program, Todd Roehrman, feels that he’s doing his best to allocate the resources between the two programs and their productions.

“So actually every piece that’s in the class is being given an opportunity to perform on stage in concert in front of a live audience. So nobody is being told they don’t have that opportunity. Every single person. In the performing arts as you know, there is a process that’s called audition. You audition for a role, not everyone gets the role, right,” Roehrman said.

Many students feel like they should have been given a heads-up before enrolling in the class or before investing so much of their time in a one unit class that is no longer rewarding them with a final performance of the caliber they initially anticipated.

“The sole purpose of doing something like this is to have a final piece on stage and ready for multiple audiences and multiple nights,” McKines said.

“We got a general answer of lack of resources, but that answer kinda came, we feel, arbitrarily and without us really seeing the numbers and seeing what could really be done. Especially if the 14 of us, the choreographers, we’re all a very smart, hard-working group that are kinda close-knit and very in support of each other, are all willing to compromise,” MicKines said. “There are things that could have been done.”

The new format of the showcase is one of many changes for the dance department, which dealt with the closure of one of their studios recently. The dance program has now been integrated with the theatre program, and many students in the dance program are feeling like their resources and needs are no longer seen as a priority.

A main reason that has been given for the changes is that there are simply not enough resources to accommodate a show of that size with multiple performance dates. Each production put on by the dance program requires input from the theatre program. The performances and even the rehearsals require theatre students to work on lighting, sound, stage transitions, costuming, makeup other tasks that are integral to any production.

One of the biggest resources creating conflict between the two programs is space. Earlier this year, the dance program lost one of its studios because it was located on top of a theatre, and the pitter patter of feet during a rendition of a theatre was very distracting. That studio was repurposed to serve as a museum for some artifacts the school had on display elsewhere. The dance program is now in the process of getting a new studio, but in creating this new studio, the Brown Bag Theatre and a few other spaces had to be closed, causing both programs to be displaced. Roehrman explained that the new studio will be a shared space for both programs but has cost the theatre program some of their rehearsal spaces.

“So theatre has to compress a lot and dance isn’t really losing anything here. Every piece is being given a chance to perform. It’s not losing any facilities, it’s getting a bigger, better facility. It’s brand new. It’s beautiful. It’s nearly a million dollar investment by this campus, so dance is not suffering as a result of this merger. In fact, they’re in a much better place than they were before the merger,” Roehrman said.

Regardless of who is gaining what resources, students feel frustrated. Senior May Wells, who not only choreographed a piece but is one of the lead dancers in McKines’ piece is extremely concerned about what this merger means for the future of the department and for her future as an aspiring dancer. For graduating seniors, the changes aren’t just frustrating. They pose a threat to their ability to get jobs in the dance world. Campus performances are a resumé builder for aspiring dancers and choreographers.

“Many of us are graduating and it’s important for us to have a piece that’s been in a paid concert. If you have a piece only in the (free) showcase, it doesn’t mean much to the professional world,” Wells said.

Students are flustered by the merger and the tension between each other, but also the self-doubt brought on by having their pieces compared to others. Dancers feel like they have to compromise themselves and their vision to create a piece that will get chosen, regardless of whether or not they love the piece.

“Now it’s like, what is going to get my piece chosen? Like, do I need to add certain elements to make my piece more unique or more different when in reality, we’re trying to create based off of what we feel and that’s what we were taught in the past choreography classes that this is your art, make it you. Now it’s like, is me enough” Wells asked.

Wells, like many other students, feels like there is a lack of communication and cohesion between the two programs. When discussing the loss of one of their studios and the subsequent resolution, dance majors and minors said they feel like the people in charge of the theatre program are trying to appease them rather than actually working with them.

“Since we’re merging, we need to work more like a team within the two departments. (The chair) is still referring to us as ‘you guys’ and ‘your department’ and ‘we’re giving’ instead of ‘we need to do this,’” Wells said.

There is an overall sense of discord between the two departments and that seems to be the real root of all of the chaos surrounding the New Moves Showcase.

“If the minds came together, if they put forth the extra effort to come together, then something more could’ve been done,” McKines said.