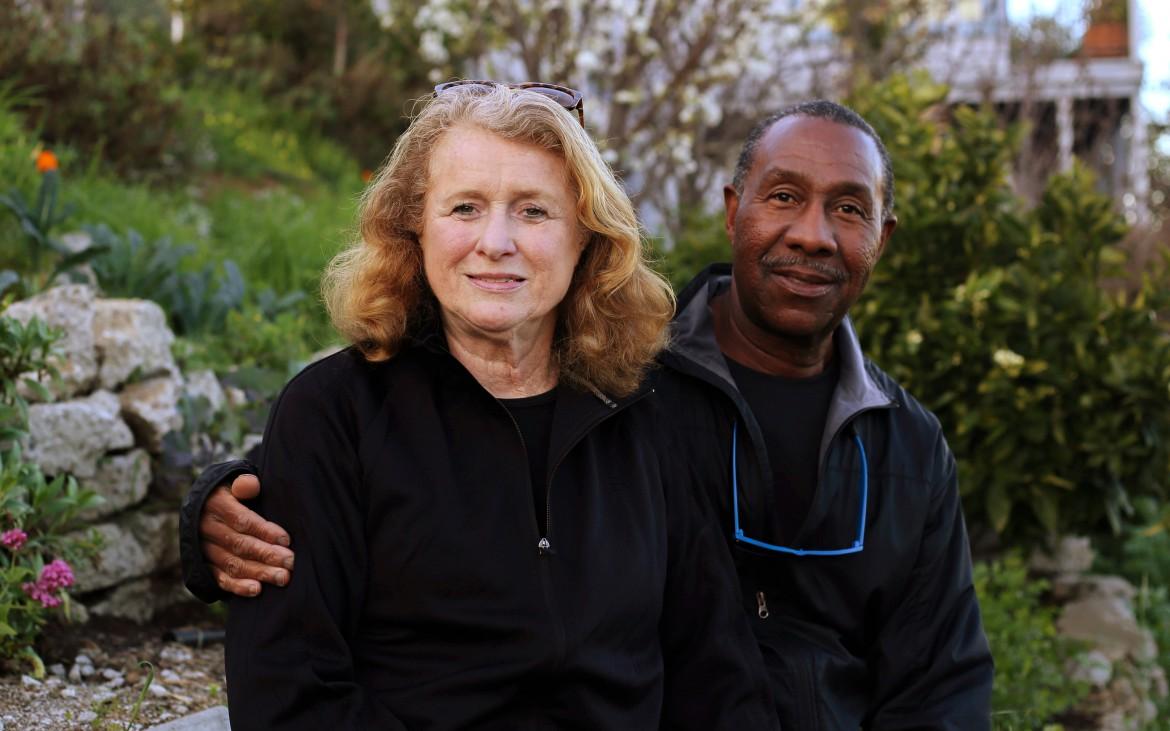 Joel and Mary McClure pose for a photo near their designated spot in the Brigdeview Community Teaching and Learning Garden in the Bayview District in San Francisco, CA on on Saturday February 20, 2016. (Aleah Fajardo/Xpress)

At 11:30 a.m., the fenced-in slope a block up the hill from the Bayview’s busy Third Street didn’t turn any heads. After a few hours of dirty work in the beating sun, patches of strawberries, dark green kale, and a booming cilantro plant are visible from the street. This corner of Bridgeview Drive and Newhall Street is home to the Bridgeview Community Teaching and Learning Garden, where its tenants are clearing out the weeds that popped up after the rain.

Joel McClure trims the growth on the chain link fence surrounding the space. The sun catches beads of sweat in his greying mustache. Joel’s wife, Mary McClure, carries a glass dispenser of ice water to a wooden bench on the first level of the terraced garden. Slices of oranges, plucked from the tree ten feet away, knock against ice cubes with sprigs of garden-harvested lavender, frozen inside.

The McClures built the Bridgeview Garden in an unmaintained city lot next to their home. With help from the Quesada Gardens Initiative and other local agricultural nonprofits, they developed the space from a dumping ground to a sustainable vegetable and fruit garden in a geographically isolated neighborhood in one of the Bay Area’s food deserts. The garden serves as a teaching ground where elementary school students, medical school residents, and community activists learn the importance of access to fresh, healthy food.

When the McClures moved into their Bayview home in 2001, the city lot next to them was trashed. The slope was overgrown with weeds, and scattered with garbage and old mattresses. A cyclone fence, padlocked shut, surrounded the lot. It was such an eyesore for Joel that he would drive home from the opposite direction so he wouldn’t have to look at it.
“I can’t run away from the problem because I live right there,” Joel said, pointing up to the house that overlooks the lot. “So I decided, as I looked out the window I said, ‘Joel, somebody has to do something about it,’ and I think the window looked back at me and said, ‘Guess who’s going to do it?’”

Their first action was to call the city’s customer service line to send someone to clear out the lot. They were told that there was no funding for the city to provide that kind of service, but the McClures could have the keys to the fence if they wanted to take care of it themselves. For two-years, the McClures chipped away at the littered lot. Mary said every time they would go out and pull weeds, it would rain and new weeds would pop up.
In 2004, Mary said they noticed something interesting down the street. The median dividing Quesada Avenue was transforming from a neighborhood dumping ground to a flourishing garden oasis. Bayview residents Annette Smith and Karl Paige, built the Quesada Gardens, which evolved into an award-winning nonprofit called the Quesada Gardens Initiative (QGI).

The McClures asked QGI for help with the lot, and they sent it in droves. Volunteers from the University of California, San Francisco Architecture and Community Design class drew up new landscape plans and offered to help build and maintain the lot as a garden. In a neighborhood-wide vote, the plans were approved to become QGI’s next project.

The Bridgeview Garden is sustained through donations, but receives funding from QGI for any materials they need. The city sent over dump trucks full of topsoil, mulch, and broken-up concrete to use for landscaping. A nonprofit in the Presidio, Friends of the Urban Forest, donated fruit trees for the garden, and the primrose trees that now line the sidewalk along Newhall Street.

“That’s a big expense right there,” Mary said. “If it wasn’t for them, it wouldn’t be affordable for us to have purchased the trees.”

One of Joel and Mary’s former neighbors, Roberto Vargas, remembers back when the Bridgeview Garden was in its original state. “I used to walk by here, and this was a dump,” Vargas said. “This is one of the spaces that for me is very representative of transforming a space that represented neglect, into a space that builds community and provides nutrition.”

Vargas, a resident of the Bayview for 25-years, is Co-chair of the Bayview Healthy Eating Active Living (HEAL) Zone, which recently merged with Southeast Food Access (SEFA). He also works as a navigator of the Community Engagement and Health Policy program at UCSF. He said the neighborhood — specifically Hunters Point — is geographically isolated.

“My mother used to drive the one MUNI bus that goes in and out of that community, and she used to always tell me, ‘You know, I feel bad charging anybody! I let folks slide because it feels like an injustice that this is the only way in and out for many of these folks,’” Vargas said.

He said that the geographic isolation creates barriers to healthy food. The United States Department of Agriculture Food Access Research Atlas characterizes Bayview-Hunters Point as a low-income, low-access census tract. Areas like this one, with limited access to sources of healthy food, either by geography, income, or transportation, are called food deserts.

Compared with the rest of the city, hospitalization rates due to diabetes, hypertension, and heart failure are the higher in the Bayview than any other neighborhood, according to the San Francisco Health Improvement Partnership. These specific conditions are all directly related to poor diet. Additionally, 18 percent of the Bayview’s residents live in poverty according to the San Francisco Planning Department Neighborhood Socio-Economic Profile, which also limits the ability to buy healthy food.
The Bridgeview Garden manages to rise above the statistics, and provide solutions to the issues that plague the Bayview. The garden hosts students from elementary school to medical school to learn about the importance of sustainability and healthy eating habits.

“It’s really good because we’re learning as we’re imparting information,” Joel said. He said he remembered when a 14-year-old boy visiting the garden on a field trip learned what Brussels sprouts looked like. “He saw them in the rows in Safeway, but never knew where they came from,” Joel said.

The garden also provides bags of fresh produce for elderly neighborhood residents on a fixed income. “Whatever we pick we want to make sure that we give them the first harvest,” Mary said. She said she didn’t think much of it at first, but the deliveries had a lasting impact on a neighbor who approached her and said the food helped her eat better and save money.

That interaction inspired Joel and Mary to keep up with the deliveries and double their crops. “We got to the point where we had so much zucchini that I would try to give it away to the neighbors and they would refuse it,” Mary said, laughing.

“This is something that brought pleasure to both my wife and I, because we were on the receiving end ourselves at one time,” Joel said, “And we’ve been blessed to have a fulfilling life, and I think that we as stewards of this garden, and also citizens of where we are, we need to share that with people less fortunate than we are.”