From Farm to Bong 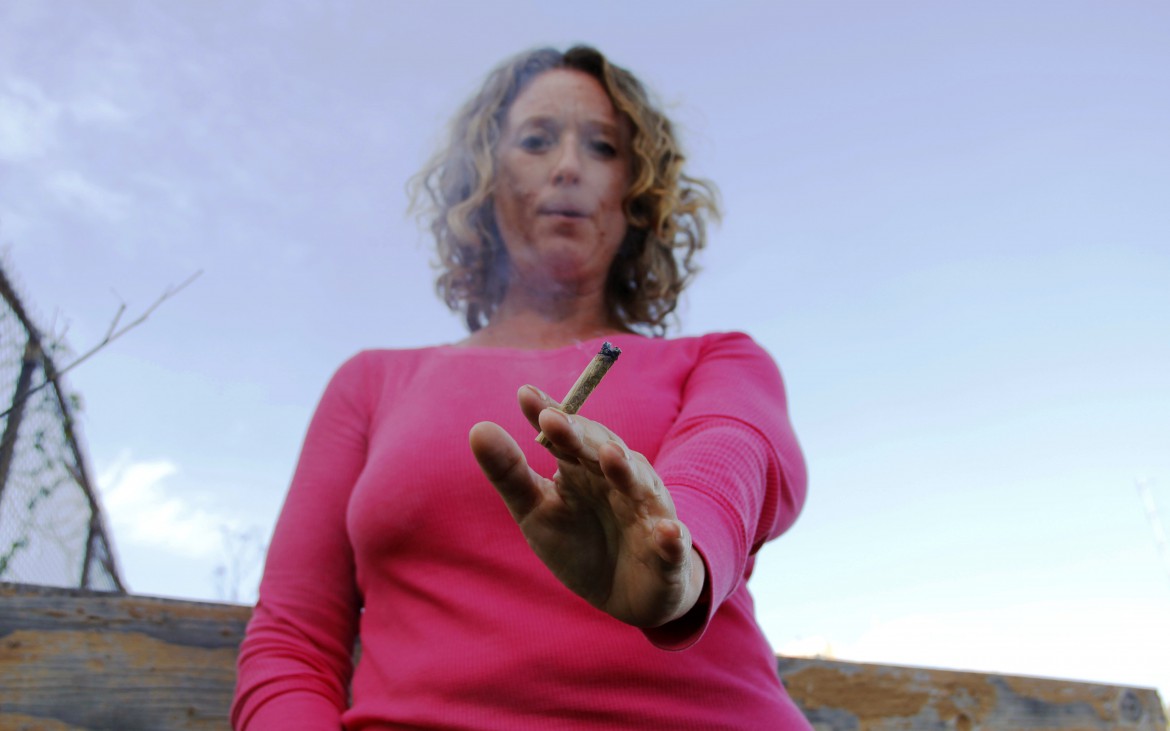 The inflammation, swollen cartilage, and swollen joint linings that come with 39-year-old Amanda Reiman’s foot arthritis keep her immobile and in pain.

Refusing to put chemicals of any sort into her body, Reiman opts out of doctor recommended steroid shots in her toes and painkillers of any sort  — even Tylenol.

“I decided that if I could get away with using cannabis instead, and not see progression in the arthritis, I would do that,” Reiman said. “And it’s worked.”

Just as with most other things she puts into her body, the organic marijuana is imperative.

As Reiman’s oven timer beeped and her vegan pie crust began to brown, she said, “I want to consume as few chemicals as possible in my life. It’s the same philosophy I have about whether I choose to take pharmaceutical drugs, and organic or nonorganic foods.” Reiman uses  one specific, transparent delivery service over the plethora of medical marijuana dispensaries in her area.

A delivery service called Flow Kana is making it easy for Bay Area cannabis patients to access quality, sun-grown, organic cannabis. The company has humble beginnings, playing a different role in the farm-to-table movement. In the same time that you can have an organic meal on your table, you can have organic cannabis in your bong.

Buying pot used to mean hopping in your dealer’s luxury car, driving around the block to avoid being seen, and paying in cash — without having any idea the type of marijuana you’re smoking.

Only recently did your “dealer” pull up in a Miata, hand you your organic cannabis in a tiny Mason jar with a personalized thank-you note and a piece of chocolate, and ask, “Cash or card?”

“Ultimately, our goal is to make our products available to patients in as many channels and avenues as possible,” Adam Steinberg, Head of Sales Development at Flow Kana, said.

They established its presence through its delivery app, that allows their patients to find the cannabis that best suits them and order it to be delivered in thirty minutes or less. With a steady revenue increase of 15 percent per month, according to CEO Michael Steinmetz, its year has been a success.

Once a patient’s California ID and Proposition 215 recommendation given by a physician for legal use, are verified through Flow Kana’s system, the patient will get a confirmation text or email saying when the patient should expect a delivery. Through the app, the patient can track the driver, just as with other food delivery services.

Occasionally Joe Maddox, a delivery driver for Flow Kana, still gets “old school” clients who try to jump in his car to whisper about “the goods,” looking around cautiously to make sure nobody sees.
“For god’s sake, it’s legal!” He would proclaim reassuringly.

“It’s also,” he pauses, “Absolutely fire,” referring to the great quality of the cannabis.

It will continue delivering to a variety of patients: those that lack mobility, those with disabilities, and those who use cannabis recreationally. Steinberg says that Flow Kana’s marijuana and concentrated products will begin popping up in brick-and-mortar dispensary locations around the Bay Area soon.

Reiman favors Flow Kana because of the way they let their patients know exactly who grew the pot they’re smoking. “When I order from Flow Kana, I feel like I’m getting that kind of information about my product that you don’t get when you go to a dispensary,” she said.

“Instead of just an on-demand delivery service, we view ourselves as a premium cannabis brand,” Steinberg said. The company’s goals are to bridge the gap between the patients and the mystery of where their cannabis came from, and to normalize this medicine in general.

Steinmetz envisions an industry with more transparency. He saw a huge lack of that in the industry today, which is why Flow Kana shows its patients exactly where and how its marijuana was grown.
“‘Our farm is located on a sun-drenched, 3000 ft. ridgeline in Mendocino County. We run a micro-scale, 100% solar powered, diversified family farm, with roughly two acres of mixed vegetables, flowers, herbs, and connoisseur grade medicinal cannabis’,” it’s website advertises.

Growers use the terms “chemical” and “organic” to distinguish the two different production manners. We put food into our bodies that contains chemicals from pesticides and GMO’s, but inhaling the smoke from those chemicals has completely different bodily and environmental effects.

According to the Honest Marijuana Company, an organization that teaches the public about the importance of organic marijuana and how to grow it, super chemicals and specialized plant foods used to grow chemical marijuana carry chemicals and toxins that are not supposed to be funneled through our bodies.

“Smoking can create pyrolysis compounds with unknown toxicities, and inhaled chemicals enter the bloodstream without first undergoing first-pass metabolism by the digestive and hepatic systems,” according to the Cannabis Safety Institute’s Pesticide Use on Cannabis study in 2015. “As a result, inhaled chemicals are typically present at much higher levels in the body than those that are orally ingested.”

The study also shows that when chemical weed is concentrated into hash, edibles, resin, or any tinctures, the pesticides are also concentrated, leading to extremely high levels of toxins in the final product. Up to 70 percent of the toxins are left in the concentrate being inhaled.

Mother Jones says an estimated one third of America’s pot is produced indoors. Per pound of pot, this estimate would emit 4,600 pounds of carbon dioxide into the atmosphere and use enough electricity to power 1.7 million homes nationwide.
Beyond the science, the comparison is in the taste.

“Organic is the most natural taste you can get,” Maddox said. “The way I’m thinking about it is, compare sweets—something to indulge in. Would you rather bite into a fresh
It’s no coincidence there are some people who would pick the latter. Some prefer organic, while others don’t care or aren’t informed about the effect of chemicals.
Louis Davis, a medical marijuana patient suffering from systemic lupus, doesn’t know the difference.

“It doesn’t necessarily matter to me,” Davis said. “If I knew the real effects behind organic versus other types, I’d probably care, but I don’t really know the differences so I can’t say whether I really care or not.”
The frail 23-year-old lies in the center of a dimly lit hospital room rating his pain at a nine. Nurses come in and out multiple times an hour to administer the various medicines needed for the side effects of his lupus. Davis describes his kidney failure, itchy lesions, and the cracked right hip awaiting a replacement.

“My reason for using marijuana is for pain,” he said. “The pain I’m in without it is not the business.”

He gets up in the morning, stiff and sore, and takes the array of pharmaceuticals for his list of health ailments. “Then I’ll smoke, and I’m able to eat breakfast,” Davis said.
When Davis doesn’t have the energy to go to a dispensary, he uses delivery services similar to Flow Kana to get his cannabis, such as Eaze, Green Cross, Green Rush, and Waterfall Wellness. He recently had a special delivery from his friend to the UCSF Medical Center, where he snuck out of his room to meet smoke outside.

“I was admitted here seven days ago and one of my friends came through while I’m on a shitload of frickin’ pain medicine and my blood pressure is through the roof so I went out to smoke a joint,” he said. “They [the nurses] didn’t know I went out to smoke, but I came back in and my blood pressure dropped dramatically. They didn’t even know why, they’re thinking it was some medicine but nah, it’s because I was smoking.”
Davis smoked a high cannabidiol (CBD) strain, which is known for lowering blood pressure.

He’s never used Flow Kana, as he favors indoor cannabis.
“Indoor is all I smoke, I don’t really touch outdoor too much,” he said. “I don’t really like the makeup of the bud, it’s sort of stringy; I’m really picky when it comes to bud. It has to look and smell potent—it can’t be some crumbly stuff.”
To each his own.

While people use different strain types to achieve different healing effects, these strain types fall under five species categories: indica, indica-dominant hybrid, sativa-dominant hybrid, and sativa. Indicas are great for sleep and pain, sativas offer a head high and energy, and the hybrids fall somewhere in between. Flow Kana associates these species with states of being: zen, chill, awe, and active. This makes it easy for people to find the species and strain that best suits them.
In addition, they offer CBD strains, which have higher cannabidiol levels than tetrahydrocannabinol (THC) levels. These are excellent for customers decreasing pain and relaxing without getting absolutely “wrecked,” or too high.

This simple, innovative means of care-taking has been helping people with vision impairments, broken limbs, anxiety, and depression for one year now as they celebrate their foundation anniversary.
Flow Kana welcomes full legalization with open arms. In a world carrying so much suffering, getting marijuana to as many patients in pain is the true goal of anyone in the business.