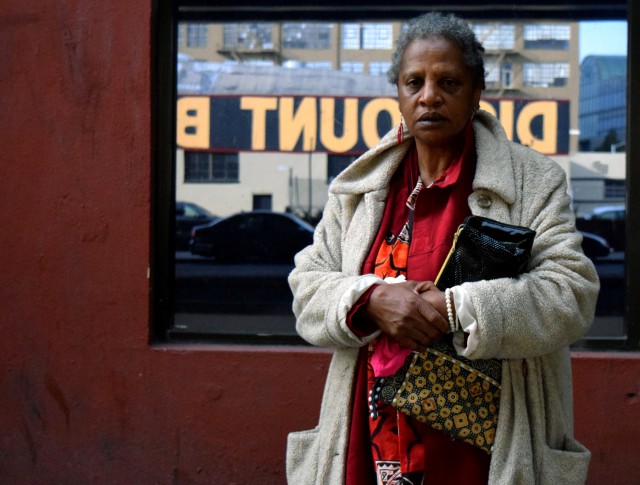 Mary recalls crying and writhing in pain as she sat to await treatment for toxic shock syndrome at Lifelong Medical Care, a clinic in Oakland that serves low income and homeless individuals. She had contracted it when she could not afford to buy feminine hygiene products and fashioned herself a handmade tampon of wadded Kleenex tissues. The makeshift tampon got lodged deep inside of her after many failed attempts to remove it. Mary, who asked that her last name not be used, recalled the incident in a harried manner; she was ashamed of the circumstances surrounding her contraction of toxic shock syndrome (TSS).

Menstruation can be an emotionally and physically taxing experience, but one that becomes even more difficult when homeless and without access to feminine care products and shower facilities. This situation can result in a myriad of significant health concerns. One of these health issues is TSS, which is a bacterial infection that can result in kidney failure, liver inflammation and can even become fatal.

“There are a list of complicated issues that come without access to hygiene and sanitation,” said Leah Filler, Director of Global Community Engagement at Lava Mae, an organization that recycles Muni buses into mobile hygiene services for the homeless in San Francisco. “On the shower side, if you can’t clean up after and you’ve had your period and soiled yourself … you’re far more at risk for infection, for infectious diseases, putting others at risk as well.”

Without proper attention and care, many homeless women throughout the Bay Area may find themselves in situations similar to Mary’s.

Thirty-three percent of the homeless population in San Francisco is female. These women face a slew of issues that come without access to feminine products and sanitation. Although there are various organizations and shelters in the Bay Area that homeless people can turn to for hot meals and accommodation, homeless women often have nowhere to turn when it comes to maintaining healthy feminine hygiene practices. Coming across a clean and safe shower or access to toilets strictly for women or menstrual products is rare.

“There are not enough shelters that cater to women,” said Michelle Myers, 57, who lives on the streets of Oakland. “We just go from place to place, and get as many [tampons and pads] as you can when you can, so when time comes you’ll have enough, and when you can’t find access to showers, you just do without. You go to McDonalds to access the bathroom. You go to Burger King, McDonald’s, Taco Bell, or somewhere.”

This is the reality a lot of women on the streets have come to accept. According to Filler, women make up about a third of the homeless population in the Bay Area. There are many resources that serve both men and women facing homelessness, but their needs are quite different. It’s not just inconvenient — it’s dangerous for homeless women to menstruate on the street without proper hygiene practices.

According to Jeb Creech, the Outreach Coordinator at the Women’s Community Clinic in San Francisco, and Heather Rose, manager of the Homeless Shelter for Women in Oakland, there are only two shelters in the Bay Area that serve homeless women without doubling as a domestic violence shelter.

“I am not aware of any other organizations around here that pass out stuff like we do on a regular basis,” Rose said. “They might get a donation of [feminine products] once in awhile but there’s not a place where these women can consistently go and get the products and service they need.”

Currently, out of 40 operating shelters across the Bay Area, only seven are drop-in centers accessible to women who do not need to live at the facility. Of those seven drop-in centers, only two were not associated with domestic violence survivors.

According to Healthline, a medical information website, not having the proper products and hygiene practices during menstruation can lead to toxic shock syndrome, vulvovaginitis, risks of reproductive health and STI infections, and HIV.

However, the effects sometimes go beyond the physical consequences.

Many shelter employees agreed that women also face psychological effects from inadequate access to resources. Creech stated that when women are not able to receive clean clothes or do laundry after soiling their clothes it brings down their confidence. Filler shared stories of women who deprived themselves of water or food so they wouldn’t have to go use the restroom and soil themselves.

According to Creech, services to homeless individuals in the Bay Area are male dominated. “There are ten homeless men for every woman,” Creech said.

Many homeless women tend to stay near shelters they know will provide them with resources they need, stay hidden, or stay with a domestic partner.

“The visibly homeless people on the streets tend to be men, and tend to therefore get public attention,” said John Lozier, Executive Director of the National Health Care for the Homeless Council, a membership organization of health care providers that work together towards the betterment of homeless people. “It may well be the case that services for men are better funded than services for women.”

Because the number of homeless men is higher and because they are frequent clients of shelters, resources tend to target males. Rachel Howard, Program Coordinator of the Homeless Shelter for Women, believes that even when agencies do focus on what particular needs women have, they don’t always factor in feminine care products.

“There’s certainly a history of menstruation being viewed as something that is dirty and not a fit subject for polite conversation,” Lozier said. “And it’s reflected in all sorts of religious traditions but also in social norms. This is probably impacting support of shelters, but probably not in a conscious way, but in a subconscious way.”

Menstruation on the streets is a multifaceted issue. Many of those like Howard who are aware of the issue believe that it is in the hands of the city to make accommodations to increase those services. “I don’t think they’ve made it a priority,” she said.

4 Organizations on a Menstrual Mission
The Homeless Shelter for Women is a drop-in center started by nuns in the early 90s that serves 55 to 60 women a day.  The shelter is a place where women can eat breakfast and lunch, drink coffee and tea, shower, do laundry, and sleep.

Conscious Period is a company in Los Angeles founded by Annie Lascoe and Margo Lang, joining the menstrual revolution by selling comfortable tampons. Its tampons are 100% organic cotton and have a BPA-free plastic applicator. With every box purchased, Conscious Period donates a box of organic cotton pads to a homeless woman.

Lava Mae is a group that turns Muni buses into mobile hygiene services for the homeless in San Francisco. It launched its first vehicle in June 2014, and its second in September 2015. Altogether last year, it served 2,000 homeless people in San Francisco. It will also be doubling its schedule next month to serve more people in need.

Period Packages is a project created by Sidney Hood and two of her friends after learning about the crisis homeless women face on their periods. The ladies had an initial goal of raising a mere $500, but they exceeded their expectation and raised over $4,000. With the money, they were able to purchase over 21,000 tampons and thousands of pads. After a couple of weeks, the ladies completed 500 Period Packages, each containing 30 tampons and up to 8 pads.