When Life Gives You Lemons…Race Them 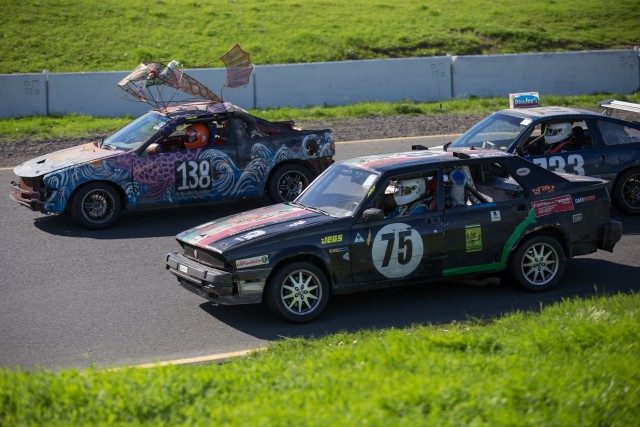 The Sonoma sun rays shone down on squinty-eyed spectators sprinkled across the bleachers surrounding Sonoma Raceway. The car racing track tucked near the mountains of the county just 45 miles outside San Francisco was host to 24 Hours of LeMons.

The objective of the national race was not to determine the fastest fruit of the land. The name is a play on 24 Hours of Le Mans, the world’s oldest sports car race, held annually in Le Mans, France.

“Lemon” is a word used commonly in the car community to describe cars that are well — pieces of shit. For two days, the LeMons race welcomes drivers of all experience levels to an endurance race of over 15 hours — in cars that cost no more that $500.

Brian Shorey, now an eight-year participant of the race, stood in his white trailer in the car lot just outside the bleachers. The morning driver’s meeting had just ended. It had warned the racers to behave better than they had the previous day, when foul play resulted in a few bad crashes.

“We used up all our luck yesterday. Today, behave!” Jay Lamm, the race’s founder,  said at the meeting.

For most teams, lasting through the whole weekend was victory enough, but the more competitive racers were in it for the whopping cash prize of $601, awarded in a bag of nickels.
Shorey and his two team members, David Burgoon and Tom Sahines, did it for fun.

“For me, driving a car at that speed in a somewhat competitive environment without having to worry about speeding tickets — even if you don’t win it’s a pretty big accomplishment,” Shorey said. “I’m quite proud of the fact that as a part-time novice mechanic and not a professional race car driver — that we won a race and have been able to last this long.”

The three men joined forces in late 2011, after meeting through the Alfa Romeo Owner’s Club, a car club for lovers of the compact Italian car.

The car they raced in LeMons was a 1988 Alfa Romeo Milano Verde, and this Sunday marked its 37th race. Its life in LeMons started back in 2008 when it was first raced at a LeMons race in Boston.

In 2010, Shorey brought the car to the Golden State.

The Milano was a faded black, small and weathered. Three racing stripes — painted in green, white, and red like the Italian flag — ran from the car’s hood to its trunk. A dirty rubber chicken hung out of a broken rear light and a miniature toy deer was taped to the roof.  The hood of the car was stamped with various faces and slogans.

The car was essentially gutted of its interior, and had no glass and only one seat . It was, however, equipped with a roll cage, a fire extinguisher, and a cooler built by the team to offer cool water to hydrate the driver, hands free.

The end of the morning’s meeting marked the beginning of the race and was the cue for Shorey and his team to begin prepping to get the car on the track.
After checking the tires for air, hooking up the radio, and starting up the GoPro attached to the inside of the car, it was finally go-time.

Shorey’s trailer sat in a parking lot littered with at least 100 others like it, as well as RVs, cars, and trucks. He bought the trailer in 2000 to transport his cars to the various LeMons races he participated in throughout the country.   “Alfa Romeo” was written in brick-red cursive on the trailer’s side.

Throughout the lot, white tents provided shade for lounging women in foldable chairs, while kids played tag with dogs and circled the perimeter on their bikes.  The grounds smelled of burnt rubber and motor oil.

Clouds of smoke billowed from BBQ pits; the sizzling of hotdogs and burgers on grills added to the symphonic buzz of roaring engines. The day was cool, the sun’s heat offset by a light but steady breeze. Rolling green hills stretched for miles as a backdrop to the track.

With such basic requirements — showing up in a car worth less than $500 dollars with a team of at least four people, both driver and car equipped with proper safety equipment — the turnout for LeMons was always a spectacle.

“They [the race organizers] encourage themes, so you get a few wankers out there every race,” Shorey said, chuckling, his native Boston slang showing through.

And “wankers” there were.

A particular car, Number 169, circled the lot plastered with enlarged photos of naked women with ungroomed private parts. Another, with the word “ASSCAR” emblazoned in bold on the door panel, featured a life-size , plastic rendition of the bottom half of a woman’s body protruding from its trunk. One car, read  “TRUMP” on one side, “You’re Fired!” on the rear, and had an enlarged toupee on its roof.

Meanwhile, the drivers on the track raced at their own pace, cautious of competitors, careful to avoid bumping into one another so that they wouldn’t be called to the penalty box.

A blue and yellow tow truck circled the raceway, prepared to pick up any totaled vehicles to clear the track. A few times, all cars were instructed to stop so that the track could be cleaned of oil spills.

By three thirty in the afternoon, Shorey was coming up on the final hour of the race. He had taken over from Burgoon two hours earlier.

By that time the lot had begun to empty. Loyal spectators remained in the stands to watch the final laps, while others scrambled to grab a bite from the only food truck still open.

The rumbling of the engines began to grow faint as more cars broke down or were kicked out the race altogether. A buzz from the radio told the rest of the team to prepare the trailer for Shorey’s arrival.

An exhausted Shorey drove the car into the trailer and climbed out.  The car emerged from the race virtually unscathed.  The team was satisfied.

“Well the race was awesome because we finished, the car’s on the trailer, and it’s still running,” Sahines said. “That’s what it’s all about.”

The team suffered only two pit stops during the race.  One was to fill up the gas tank, and the other to fix a fuel leak that the judges spotted.

Despite the penalties and not knowing the exact place they finished out of the 147 competitors, the team left Sonoma more than satisfied.

“This is the purest form of racing.”