How the Bay Area Grows 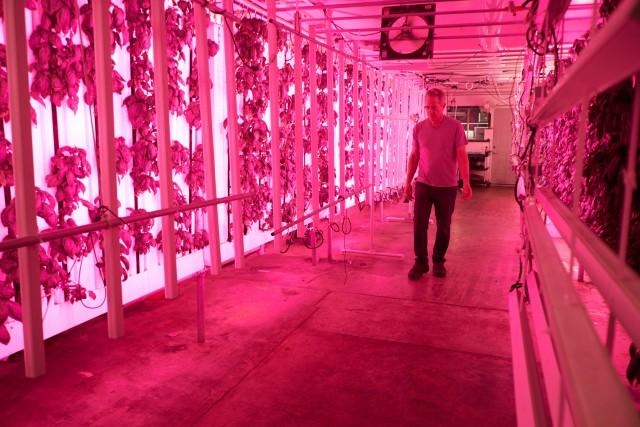 Local Greens' Manager Ron Mitchell walks down the main aisle of their space saving vertical Basil plant grow. The room has an intense magenta glow due to the LED lighting set up. Photo by Taylor Reyes.

Growing Up Farms, located in a once-unused warehouse in the Crocker-Amazon neighborhood, uses a developing strategy called aquaponics to grow its food.  This system combines hydroponics and aquaculture to create a closed loop that benefits both of its occupants: plants and fish.

Fish waste pollutes their water, which is why fish tanks and household ponds have filters installed.  In an aquaponic system, bacteria that occurs naturally around plant roots converts the poisonous ammonia into nitrates and nitrites – the major components of store-bought fertilizer.  With plant roots growing directly in the water, the fish get clean water and the plants get fertilizer.  In addition, this system retains most of its water as it’s not being lost in soil, which is important in California’s drought.

“Part of our model is to stay as local as possible,” Mark Hintzke said.  The farm has partnered with several restaurants in the city to provide them with fresh produce.  Among these is Mission Edge Café, a restaurant that hasn’t found fresh huacatay – Peruvian black mint – in the area for the salsa it makes.  In March, the huacatay that Growing Up Farms is growing will mature, and Mission Edge Café will receive its first order.

Local Greens is a unique operation in Berkeley that eliminates the need for chemicals or sprays of any kind by keeping its plants sterile and isolated inside a warehouse served by artificial light. Founder Ron Mitchell worked in lighting and equipment before delving into organic farming.  When he moved to Berkeley to be closer to his daughter Faye Mitchell and her family, he started Local Greens and she soon joined the company on the administration side.  The venture struck a deal with Whole Foods, and now sells to 26 of its stores in the area.

Hydroponics is the practice of growing plants in water.  Without the use of soil, growers can control exactly what their plants consume by adding more or less fertilizer to the water, and they don’t need any special equipment or extra time for cultivating the earth.  Hydroponics also conserves both water and space: water isn’t lost in the ground, plants can be grown closer to each other as nutrients can be easily adjusted, and systems can more easily be stacked vertically and take up less room on the light.  However, a hydroponics system can be difficult to set up, and any disease in the plants will spread rapidly to the whole crop.

Everything that comes through the doors of Local Greens is sterilized.  The team does thorough research into the origin of the seeds they buy to make sure they haven’t been sprayed or exposed to animal activity, and they test the seeds for human pathogens and other contaminants before planting.  The water used in the hydroponic system is filtered thoroughly, as is the air coming into the warehouse. The fertilizer used in the process, which comes as compost from Sacramento State University, is autoclaved before introduction to eliminate any organisms.  Even the workers have their feet sterilized before entering the building.

Alemany Farm is a four and a half acre organic community farm that aims to educate local residents on urban agriculture.  Through several volunteer sessions a week, the volunteer group Friends of Alemany Farm seeks to inspire children and adults to create their own gardens at home, help community members develop job skills, and promote area food security, the availability of and access to food.

Alemany Farm also welcomes school, service, and corporate groups to volunteer for an afternoon to learn about food growth, give back to the community, and help build teamwork.
Project Open Hand is a non-profit founded in 1985 that provides fresh, nutritious meals to seniors and critically ill locals.  In 2013, it established an indoor hydroponic greenhouse to produce lettuce, herbs, and micro-greens for its meals.  Steven Hunter, Director of Building Operations at Project Open Hand, spearheaded the idea of a hydroponic system when the building wasn’t able to support a roof garden.

The organization remodeled one of its building’s downstairs rooms with windows facing the street, and installed two four-foot long wheels built by hydroponic company Omega Garden.  Each of these wheels has an artificial light source and rotates slowly so its 80 plants grow evenly.

“It was just a casual notion,” he said of the idea’s inception.  “’Oh, we should raise a bit of food.’”  But as plans started developing – and the project raised $30,000 in its fundraising stage – Project Open Hand was able to add two more hydroponic wheels and now grows basil, mustard greens, arugula, lettuce, and micro-greens.

What started as a small idea is now bringing passersby inside the doors of Project Open Hand to find out about the big round gardens in the window.  “They would walk in and they would just say, ‘Wow, I’ve never seen anything like this before,’” Hunter said.  “It’s a pretty nice way to introduce folks to what we do at Open Hand.”

Shielded from the bustle of Highway 101 by a row of trees, San Francisco Bee-Cause is an apiary – or bee farm – tucked into just under an acre of land in Visitacion Valley.  Nine colonies of native bees sit in a horseshoe shape on one side of the lot; fruit trees and other flowering plants occupy most of the other land.

San Francisco Bee-Cause accepts but doesn’t depend on donations, and funds itself otherwise through the sale of the honey it produces.

“The whole purpose of the bee farm is to feed the bees, and demonstrate that the bees can feed us,” Karen Peteros, the organization’s co-founder, said.

Founded in 2006, San Francisco Bee-Cause aims to demonstrate the value of bees by stimulating the city’s ecosystem.  It also offers a two-year apprenticeship program free of charge for dedicated participants.

“I really wanted something that was more charitable and educational in the long run,” Peteros said.