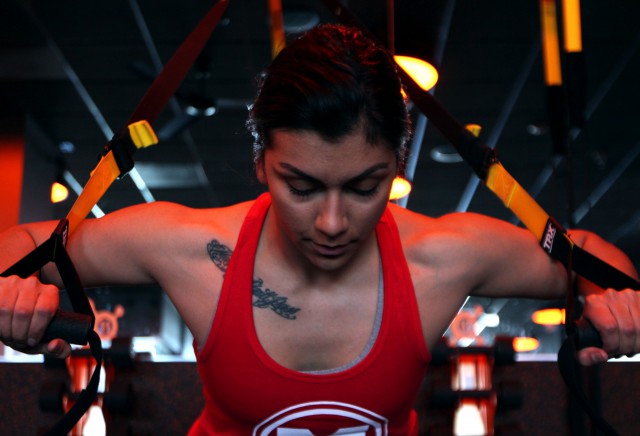 Marilyn Bretherick, a female bodybuilder and personal trainer, uses the TRX training machine, a calisthenics workout for muslce functionability, as a part of her daily workout plan and during the weeks of training leading up to competition. (Xpress/Kofman)

Loud clanks of clear colored heels, bright flashes of cameras going off, and a beaming spotlight reflecting off the tanned, muscled women boast the determination and willpower female bodybuilders need to have in order to celebrate and exhibit a body for which they have labored countless hours.

For a young bodybuilding bikini competitor, the path towards achieving a qualified body for a competition begins in the early hours of the morning, sometimes even before the sun reaches the proximity of the earth and all its sleeping inhabitants. Marilyn Bretherick, competitor for the National Physique Committee (NPC) and fitness trainer at Orange Theory Fitness, begins her day at four in the morning for an intense two hours of cardio, rewarding her self-discipline  to wake up at such an early time of the day and marking her dedication to a sport that has offered her new friendships, strength, and the persistence to keep competing.

For the past thirty years, women have participated in a sport that was once thought to be strictly men-only. The 1980s saw the first female bodybuilding competitions, including the American Championship and Ms. Olympia, where women were first able to compete and display their hard earned bodies. In recent years, the sport has seen a spike in female participation.  Preparing for a competition is a tedious task, taking up to 12 weeks of near-constant work.  They attend gym sessions, cut down twenty to thirty pounds before the competition, do [or something better] early morning cardio trainings, eat well, and prepare meals for several days at a time and splurging money during the expensive competitions.

Though bodybuilding was strictly designed for men, women have faced the odds and overtaken a sport to show that they, too, have the dedication, strength, and determination to compete in a sport that toughens their mental health and tempts their motivation.

“Women socio economic status will show that women are intimidated by joining a sport if it tends to lose their feminism just because it’s a harder look,” Marilyn said. “But opening it up to everyone makes the sport more versatile. And I think that limiting it to just men prior to the 80s was just based on history. It was a male dominated sport. Not very many women wanted to compete in it and it wasn’t really a social class that could dedicate it to having multiple athletes other than men, until women openly expressed that they wanted more division in the NPC, IFBB. It was just based on need.”

Participating in bodybuilding as a competitive sport comes with a hefty price tag ranging from hundreds to thousands of dollars on coaches, suits, tans, posing lessons, healthy food, and show registrations.

“I spent $3000, but it’s one of those things where you step on stage and you say, ‘I put in all this hard work’,” Marilyn said. “Any competitive sport you play in you’re going to pay money into it. I think your time, more than anything, says more than your money. Anything you’re passionate about you’re going to put your money into it. When you get into a relationship how much money do you put into a relationship? My relationship just happens to be with my sport. Anybody can afford anything if they care about it.”

Unlike other sports, bodybuilding is able to challenge a competitor’s physical strength along with their mental health. Many times, women in the field face body dysmorphic symptoms, finding blemishes and faults in their otherwise perfect bodies. According to Bretherick, competitors in any division face self-doubt and are constantly monitoring critiquing themselves on whether they are progressing and developing their body as scheduled.

Mental strength is also threatened during the cutting and dieting period of bodybuilding. Competitors have to constantly spend money on healthier food options that prevents them from breaking their clean eating diets and attempt to eat smaller meals at higher rates. According to muscleandfitness.com, bodybuilders should eat six smaller meals instead of three or four larger meals a day.
“It’s all mental. You take somebody’s food they become psycho. When you put yourself through a diet you’re really testing your bodies ability to process food. You become mentally exhausted. I think I broke down and cried over 20 times,” Marilyn said. “You have to be mentally tough, because if you’re not you’re going to break down.”

Along with the expenses of clean eating and buying food products that fit into the bodybuilding lifestyle, many competitors buy and benefit from supplements such as protein shakes. According to nutritionstudies.org, the most popular supplement among bodybuilders is the use of protein powders that aid the body’s production of muscles, and the manufacture hormones, enzymes, cellular messengers, nucleic acids, and immune-system components. Though supplements like protein shakes are taken, there is an underexposed usage of supplements such as steroids. How much do protein powders cost?

“I can’t speak for all women in the industry [use of steroids] but there are supplements that are beneficial for a woman looking to build muscle such as protein, creatine, and BCAAs,” Brandy Vargas, a professional trainer, owner, and co-founder of Power Dolls Fitness said. “These all help keep the muscles fed, help with recovery and prevent muscle breakdown.”

Though the usage of steroids is rare amongst those in all of the divisions except bodybuilding, the NPC and IFBB leagues of bodybuilding don’t participate in the testing of their contestants.
“ You’re never going to find a NPC athlete or IFBB athlete that openly says hey I took Advair or Tren or Winstrol. You’re never going to find an athlete like that,” said Marilyn.

“Bodybuilding is different from regular exercise because it requires more dedication, discipline and knowledge.  The goal of a bodybuilder is not just building huge muscles but also symmetry, proportion, and balance.  Bodybuilders follow diets that are focused on muscle building and keeping lean,” Brandy said.

Though bodybuilders spend countless of hours chiseling their bodies at the gym, developing both their physical and mental strength, it is not until the day they step on the pageant-like stage, illuminated by the bright fluorescent lights and the glowing bikinis that they feel accomplished they had the strength and resilience to survive 12 weeks of dedication and training.

“It’s a really mentally tough sport. If you work hard every single day, the trophy is really coming out with the best possible “you,” more than what a judge is looking for,” Marilyn said.