When Push Comes To Shove 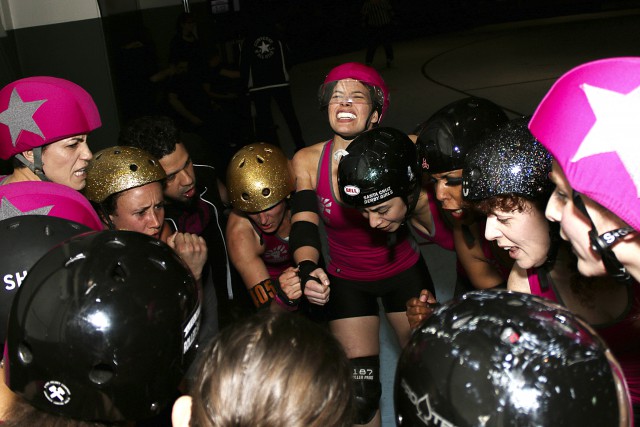 Berkeley Resistance derby team members celebrate their win after their bout with the Richmond Wrecking Belles at the Richmond Craneway Pavilion in Richmond, Calif. on Saturday, March 26, 2016.

A crowd of people cheer on from the stands while women in eye-catching uniforms and black bottoms fearlessly skate their way through the track in hopes of gaining points for their team. One man yells, “Go Frightmare!” She hears the chant, which brings a radiant grin through her face. As their skates glide on the concrete floor, the ladies bump and shove each other to the ground, all in the name of the game that is roller derby.

In 2008, Stephanie Griffith didn’t have much knowledge of roller derby but she went to her first match in Tallahassee, FL anyways.

“It was really exciting,” said Griffith. “I didn’t know much of what was going on … the rules were kind of over my head. I just knew it was a really exciting sport.” She watched roller derby from the sidelines for three years before she decided to join.

Although Stephanie had almost no experience on skates, that wasn’t going to stop her. Her tenacity kept her going, and in 2011 she joined Fresh Meat, a derby beginners team in Washington D.C. She hasn’t looked back since.

Having been an avid mover most her life, it was that time again where she was looking to be somewhere new, so in 2014 Griffith moved to San Francisco. There she became a full league derby member. Stephanie Griffith, better known by her derby name “Frightmare,” was drafted at the end of 2014 by Berkeley Resistance, one of the four roller derby teams of Bay Area Derby (BAD).

Founded in 2004, Bay Area Derby is an all-female flat track roller derby league based in the San Francisco Bay Area and a member of the Women’s Flat Track Derby Association (WFTDA). Currently, the league is ranked at number nine in the world.

BAD is a skater owned and operated 501(c)(3) non-profit organization, meaning that it’s entirely volunteer-run. Skaters provide their own gear, which consists of things like wheels, laces, safety pads, and helmets. They’re also in charge of scheduling derby matches and events. The volunteers and skaters of BAD pour their hearts and souls into growing the league every year.

BAD consists of four teams: Berkeley Resistance, Oakland Outlaws, Richmond Wrecking Belles and San Francisco ShEvil Dead. There’s also the All-Stars team, Golden Girls, which is composed of 20 of the league’s top skaters. They compete on an international level against other WFTDA leagues and represent the skill, heart, drive, and commitment of Bay Area Derby.

Griffith is one of Berkeley’s primary jammers, the only skater in a match that is allowed to score points. Aside from being in Berkeley Resistance, Griffith is also on the All-Stars team, a league representative for WFTDA, and the Travel Team Boot Camp Coordinator for BAD.

On top of all her derby commitments, she works a 9 to 5 job as a Marketing Assistant and Project Manager at Amy’s Kitchen, which helps pay for her hobby — or as she says, her second job.
“My dear co-coach reminds me to say ‘no’ to things, which is really important to do to keep your sanity,” said Griffith. “But I’m the kind of person with roller derby who just dives in. It’s my full-time hobby. I’m the kind of person who likes to do a lot work. Like if I’m doing something, I like to be fully committed to it.”

Rolling into their 11th season, Griffith became a coach for Berkeley Resistance and took on the position of the Public Relations Manager for BAD. Within her new title, she’s already made some influential changes – one of them being the name change of BAD.

Before 2016, Bay Area Derby was originally B.ay A.rea D.erby Girls or B.A.D. Girls, but the league decided to drop the dots and remove girls from its name. The change was a key step in the evolution of the flat track roller derby league.

“There were a couple of things we wanted to tighten up with our branding, just the inclusiveness and language and everything with our image and our league,” said Griffith. “Our teams are still women flat track roller derby teams but our officials, our volunteers, our fans, even people who are women by sex but not necessarily by identification, don’t want to be called girls.”

The new name reflects the diversity of the community to include the wide variety of members and supporters who represent the league. “Bay Area Derby and we’re still BAD, that’s the important thing to know,” said Griffith.

There will be a total of five bouts in this season. According to WFTDA, the terminology “bout” comes from boxing, because a derby match is a fight to the end.
With two bouts through and three more to go, BAD is embarking upon a riveting time.

However, derby can become an overwhelming part of life because of the amount of time skaters devote to the sport and to keeping BAD active. Many players have to find balance within their work schedule and other non-derby related duties.

“Basically, I don’t really take breaks at work because if I’m going to take my work break, I’m sitting on my computer or looking at my phone doing derby work,” said Griffith. “My job breaks are literally spent doing that, so any of the PR emails or team stuff is when I’m doing that.”

Around six in the evening on weekdays, Griffith gets home from work and unwinds. She sits on the couch and plays with her two cats until she has to hop back into her car for derby practice. She does this four times a week.

There are weekly practices, meetings, scrimmages, weight training, and event planning. Practices can range from one to three times a week, at two hours per practice. Meetings and scrimmages are once a week, lasting a little over an hour. Skaters will spend the majority of their time at the Peralta, the league’s headquarters in Oakland. All of these priorities take time, which can exhaust some skaters but doesn’t stop them from doing what they love.

“It definitely stretches your mental and physical limits but it teaches me more about myself and what I actually can handle,” said Griffith. “Especially right now with how much I’m doing and skating and how to say no to things and encourage others to step up.”

But what keeps many skaters going through all the hustle and bustle is the sense of comradery behind BAD. Nobody can express that more than Jessica “Jambee” Little, who lost her husband in 2014.
“The girls really all got together and were there for me during that time,” said Little. “They were so supportive and kept me going … they’re like family to me.”

Little joined Reckless Rollers in 2011, the recreation program at BAD where those who are interested can get a sense of what derby is without the time or financial commitment required of a league skater.

“It’s great because it was just on the weekends and there was no pressure,” said Little. “Some people go just for the recreation, but some people go because they want to work up and go for tryouts to get into the league.”

As her interest in derby grew through Reckless Rollers, she tried out for the league and became a member of Berkeley Resistance in 2013.

Kirchner became interested in derby through her older sister, who skated with Santa Cruz Derby Girls. She grabbed her hand-me-down skates and decided to join the league’s boot camp in 2013.
“With virtually no roller skating experience, I could barely stand on skates when I first started, but by the end of the 6 week boot camp I was starting to get a grasp on the fundamentals,” said Kirchner.

A few years later, Kirchner moved to Oakland and tried out for BAD in September 2015.

“Though I’ve only been with them (BAD) for a short time, it’s truly been one of the best experiences of my life,” said Kirchner.

Avishay’s previous experience with San Fernando Valley’s Junior Roller Derby has brought new potential to Berkeley’s jamming rotation, which is undoubtedly the best in BAD since their 2015 league title win.

Roller derby isn’t just a sport; it’s become a community where women from different backgrounds come together and strive for growth. Driven by its members’ passion for the sport and the presence of like-minded people, Bay Area Derby is an organization which empowers, inspires, and strengthens women.

“Roller derby means many things to me. It helps me improve and better myself in more ways than I can count, but the most prominent improvement is physically,” said Kirchner. “Since starting roller derby, I’ve really had to push myself physically and improve my lifestyle in order to be able to keep up with all the other extraordinary athletes in the league. Derby has pushed me to maintain a healthy and active lifestyle, among many other things, such as communication, attitude, and accountability.”

With the second bout behind them, BAD will be training for the next couple of months. The next match is scheduled for June 25 at Richmond’s Craneway Pavilion where Richmond Wrecking Belles face San Francisco ShEvil Dead and Berkeley Resistance take on Oakland Outlaws.