Can’t Drag Me Down 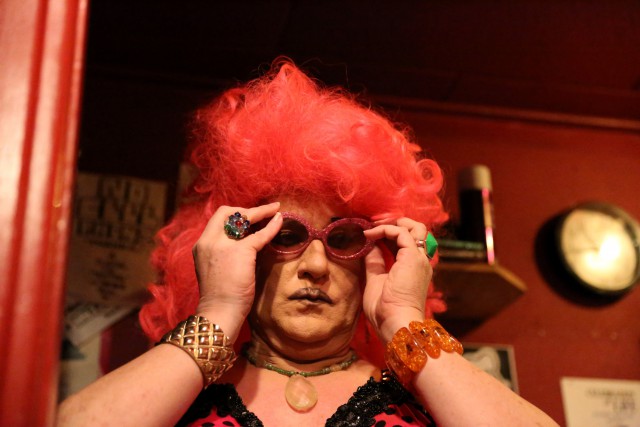 Collette LeGrand-Ashton changes outfits in the backroom of Aunt Charlie's Lounge in preparation to perform her number with the Hot Boxxx Girls in Tenderloin on Saturday March 26, 2016. (Xpress/ Aleah Fajardo)

She’s been performing for 35 years and she’s not worried about stopping in the middle of a performance and announcing she’s done. Though she might not have the energy anymore Collette LeGrande-Ashton is far from done for the night.

Though retirement is an option, for LeGrande-Ashton, drag queen and cocktail waitress at Aunt Charlie’s Lounge, this won’t be happening anytime soon.

LeGrande-Ashton, 65, is one of the oldest drag queens in San Francisco and has been working at Aunt Charlie’s Lounge since 1998. She has been performing for over 35 years.  LeGrande-Ashton performed in her first drag show in her late teens in Santa Barbara. During 22 years of that time she was also working in customer service at AT&T  until she retired in 2002.

At Aunt Charlie’s, LeGrande-Ashton goes in every second and fourth Wednesday of the month and works every Friday and Saturday.

During an evening inside Aunt Charlie’s Lounge, a gentle pink light from the neon sign over the bar illuminates everything. Thirteen people sit at the bar while the other 30 patrons are seated at tables, enjoying their evening.

LeGrande-Ashton and Aunt Charlie’s manager, Joe Mattheisen, chat with those sitting at the bar while they fill out orders.  LeGrande-Ashton herself walks around the limited space of the lounge to make sure everyone has a drink. As the evening goes on, the lights start to dim and everyone’s attention is brought to the back of the bar, where a curtain keeps the performers out of view.

As the host of the evening, Ruby Slippers, is introduced and the first of the performers go on, LeGrande-Ashton makes her way to the back. After the first couple of performances, Slippers introduces the next act and once the music starts playing, LeGrande-Ashton emerges in a completely different outfit.

Aunt Charlie’s Lounge is one of the oldest LGBTQ-friendly bars in San Francisco. Despite the changing times the bar has remained open while the former neighboring bars have all closed. According to the manager this can be attributed to the fact that Aunt Charlie’s is owned by a single person and doesn’t.

“What’s helped us here is it a sole proprietor,” said Mattheisen. “It’s not a corporation. It’s not a partnership where it needs to bring in enough for three or four people.”

Mattheisen also contributes the bar’s success towards the fact that the bar has handled its own problems, which made getting their entertainment license easy.

“The whole time the bar’s been here,” said Mattheisen. “It’s handled its own problems.”
Their customer base is mainly regulars, but they receive a lot of out of towners who want to see the drag shows the Dream Queens Revue and the Hott Boxx Girls.

“If you’re gay or straight it doesn’t matter,” said Mattheisen. “If you’re going to be a jerk you’re not staying.”

Over the course of LeGrande-Ashton’s career as a drag queen she has been Grand Duchess two times for San Francisco’s Grand Ducal Council (GDC). Becoming apart of the the GDC  similar to presidential elections, nominees put their names forward and must campaign around the city to gain votes.

The GDC is a non-profit fundraising organization that does work for various charities. Despite no longer being part of the GDC, LeGrande-Ashton continues to attend and do fundraisers for different charities.

“At Aunt Charlie’s I pretty much have a routine. We do five or six of them a year there. I’ve started most of them,” said LeGrande-Ashton. “Did one for Magnet which provides services for HIV people and stuff like that. Did another a couple of months ago for St. James Infirmary. That’s for sex workers since there’s a lot of them in the Aunt Charlie’s area.”

Not as young as she once was, LeGrande-Ashton explains that she sometimes feels un-energized but continues to work at Aunt Charlie’s and attends various fundraisers and charities when they ask her to.

“Sometimes it’s just a matter of how I feel that day other than that I have to gear my mind to do it now,” said LeGrande-Ashton. “Years ago I could just do it in five minutes and think nothing of it, but now I sort of have to have a routine,” she said about getting ready for a night balancing drag and cocktail serving at Aunt Charlie’s

In addition to having lower levels of energy, LeGrande-Ashton has also developed some minor health issues, but that still hasn’t dissuaded her from going in.

“I’m developing a bit of arthritis in my feet walking the cocktails,” LeGrande-Ashton said. “But I’ll keep doing that until I fall over”

Ashton’s attitude to keep working is not too surprising. According to a survey conducted by TransAmerica Center for Retirement Studies found that a majority of “sixty-somethings” and older plan on or are still working. While others plan on at least working part-time.

“Even if I don’t feel like it I’ll drag myself in there. I owe that place a lot,” said LeGrande-Ashton. “It gave me place where I made a lot of new friends and met a lot of great people. The only days I’ve ever missed at Aunt Charlie’s are days when I have an event.”

Ruby Slippers the hostess for the Dream Queen Revue has been a longtime friend of Collette and has attended various fundraisers and charities with her doesn’t believe Collette will ever retire.

“She’s not going to give up,” said Ruby Slippers. “Never. Never! I don’t care what she says, because she loves it!”