More Than A Party Drug 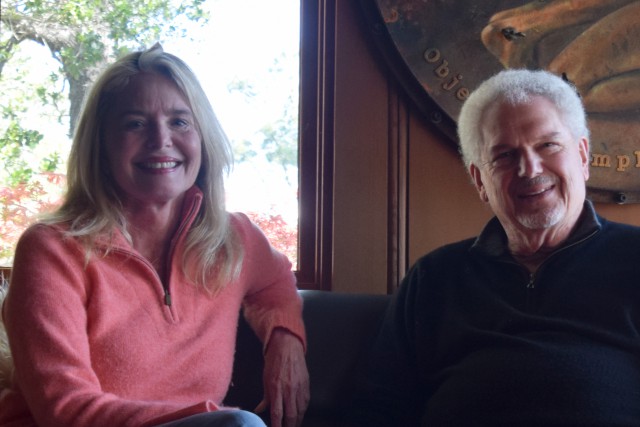 Dr. Philip Wolfson and therapist, Julane Andries pose for a portrait inside of their Marin County home that doubles as their place of business. (Eric Chan / Xpress)

Andy Gold was on the trip of his life.

“I was completely overcome by the drug,” said Gold.

In fact it was one of the only trips of his life. He was not at a rave, not at a boisterous dance club. Instead, he was propped upon a soft grey leather couch placed beside a large window overlooking the hills of Marin County, a couch which he affectionately refers to as the “tripping couch.”

“I had never done MDMA before,” said 62-year-old Oakland attorney Andy Gold. “I’d lay there for a long time and didn’t have any effect from the drug. After a while I thought I must be on placebo – and then it hit me like a ton of bricks.”

Gold is among the first of 6 research subjects to complete a several months-long clinical drug trial, which will determine the impact of MDMA on anxiety, depression, loss, and symptoms of post traumatic stress disorder caused by life threatening illnesses.

In 2004 Gold was diagnosed with stage 3 colon cancer. He quickly entered surgery and began a  long string of chemotherapy treatments in 2005, while he had simultaneously landed the biggest case of his career. During the case Gold was bound to privacy, careful not to reveal anything about his health within his work life.

“I was living this very intense double life,” he said.

The effect of this dual identity combined with the fear of losing his life lead to a delayed emotional and psychological impact, which didn’t allow him to process the shock left by his cancer. After struggling with the long term trauma following his long battle with colon cancer, and in 2015 he decided to seek help and soon joined a clinical trial in hopes to regain his life.

The unique study led by Dr. Philip Wolfson and family therapist Julane Andries follows up on multiple PTSD studies previously created and conducted by the Multidisciplinary Association for Psychedelic Studies (MAPS). The pharmaceutical research and educational nonprofit organization is now celebrating their 30th anniversary with a banquet in Oakland this April to raise funds to be used in research. According to MAPS director of communications, Brad Burge, they are currently fundraising to get 1 kilogram of pure pharmaceutical grade 3,4-methylenedioxy methamphetamine (MDMA). This is a milestone for MAPS that would allow them to conduct research that will move towards the possibility of a Phase 3 study. This study would precede approval for MDMA to become a drug to a prescription drug to be used and administered for medical purposes.

The preliminary studies using the drug have shown that MDMA in conjunction with psychotherapy can help people overcome post traumatic stress disorder from war and sexual violence, as well as aid communication in patients with autism.

“The use of it [MDMA] increased ability for people to handle negative trauma and feelings inside themselves and to come to a more loving position with themselves and with others,” Dr. Philip Wolfson, lead investigator of the trial, said. “It facilitated dialogue and communication, so it was a very successful model.”

Wolfson is no stranger to the use of these treatments and has a long history of administering psychedelics during his sessions before the U.S. Drug Enforcement Administration (DEA) deemed MDMA illegal in 1985. Before then it was used by therapists in the United States & Europe as an adjunct to psychotherapy.

Once MDMA was classified as a Schedule 1 controlled substance, which is defined as a substance with a high potential for abuse and no currently accepted medical use. Subsequently, the substance, commonly known by its street name “Ecstasy,” never disappeared but instead resurged as a popular party drug that is frequently cut with other illegal substances and widely used by millions in the United States.

“Pretty much anyone can go out on the street and buy some Molly or some Ecstasy,” Burge, said. “More than half the time they aren’t going to know what they are getting. Here we have this epidemic of uncontrolled drugs and drug use that happened as a result of them being illegal.”

While MDMA and its other forms continue to grow in use and popularity, those at MAPS are hoping to encourage “scientific and rational discussion about psychedelics, whether for recreational use or for therapeutic use,” claimed Burge.

The study takes place in Marin County and is run by Dr. Philip Wolfson and his partner Julane Andries. The trial officially began in April 2015 and is expected to continue through the end of 2016. They have recently finished treatment sessions with the first round of 6 patients and have 5 new patients currently enrolled. The study is a double-blind trial in which both patient and doctor are unaware until after the second session whether the patient was given the placebo or the substance. There are weekly sessions that run for about 1-2 hours without the use of the drug, and longer sessions every 5-8 weeks involving either the drug or a placebo. These sessions can last up to eight hours and include overnight stays.

“We allow these clinical studies to proceed if they are safe and have a reasonable chance of answering questions about the efficacy of the drug for the intended use,” stated U.S. Food and Drug Administration press officer Deborah Kotz.

Though the study has not been shown to lead to any serious health issues or mental harm so far, some would argue that the somewhat radical use of MDMA would be unsafe for patients facing serious medical ailments and could cause wear and tear on the body and carry a long term effect on the brain.

“Having a very long-term view, including large numbers of people, I have not seen any long-term damage and I don’t think there is any from repeated use,” Wolfson said.

One way the use of MDMA in therapy differs from other medications frequently used in psychology is how often it is taken and the dependency that can occur. These medications are called selective serotonin reuptake inhibitors, or SSRI’s. Antidepressants and tranquilizers are SSRI’s which typically require daily use and don’t carry out a long-term effect without the medication. They are a form of treatment often used for episodic depression but can also be used by patients for decades. Instead, Wolfson’s trial aims to utilize methods taken from sessions and help patients with their everyday life without dependency of the drug or other medications. According to Brad Burge, research done in previous PTSD trials has shown that the use of MDMA-assisted psychotherapy has effects lasting up to 4 or more years.

“These people all have a certain measured level of anxiety, but similar to the other studies they all have depression and most often have symptoms of PTSD,” Andries explained. “So the protocol that we use very much follows the PTSD studies.”

Although Gold’s anxiety from his cancer may return, he is doing better knowing that he is well equipped to cope with his fears. He is aware that MDMA is not a cure for his illness, but assists his recovery.

“The drug is not a cure, but the drug is a tool,” Gold said. “There’s something about this drug and the way it’s used in therapy that just blows you wide open.”

“I’m in a better place,” Gold said with a long pause and hopeful tone. “And I hope I stay there.”

“The drug is not a cure, but the drug is a tool,” Gold said. “There’s something about this drug and the way it’s used in therapy that just blows you wide open.”

“Pretty much anyone can go out on the street and buy some molly or some ecstasy. More than half the time they aren’t going to know what they are getting.”- Brad Burge

“I was completely overcome by the drug,” said Gold.