Muslim in the Bay Area 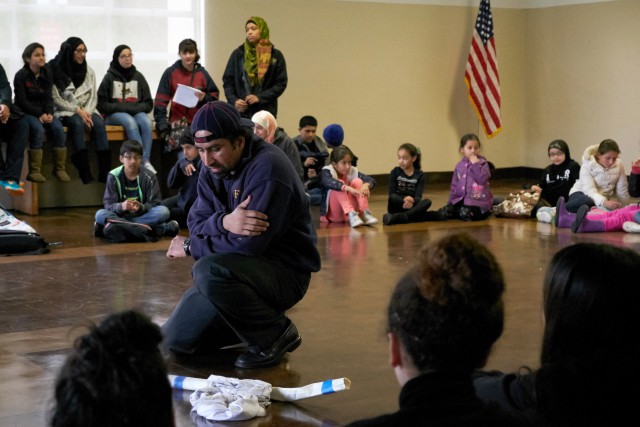 Principal Kashif Abdullah leads a prayer at the San Francisco Islamic School for his Sunday students. Photo by Taylor Reyes.

On March 13 at 10 o’clock in the morning, children lined up for bagels and cream cheese in the cafeteria of Mercy High School. Mercy High School is an all-girls Catholic school, but the kids that gather there at the beginning of each week are neither all girls nor Catholic.

The San Francisco Islamic School (SFIS) rents out part of Mercy High School every Sunday so that Islamic children in San Francisco can come together as a community and learn more about their religion.

SFIS Sunday school started ten years ago and the full-time school (Pre-K to third grade) has been around for three years.

“Before SFIS San Francisco was the only metropolitan city in the nation without an Islamic school, so there was a need for one,” Kashif Abdullah, principal and third grade teacher at SFIS, said. “We provide an Islamic environment where kids can be nurtured and they can learn their faith and their identity, so they can be strong Muslims that participate in all aspects of a society.”

With the recent elections, stereotypes have inflated – particularly those about Muslims. According to a press release from December 7, 2015, Republican presidential candidate Donald Trump said that all Muslims should be banned from entering the U.S. His candidacy granted him much influence across the country, and others have followed his Islamaphobia.

According to the Council on American-Islamic Relations (CAIR), Muslim hate crimes have spiked since the Paris attacks on November 13, 2015. According to a CAIR report, “November 2015 was the most significant spike, with a total of 17 mosque incidents, with all but 2 of those incidents occurring in the wake of the November 13 Paris terror attacks.”

What scares Islamic people like SFIS board president Omar Khemici the most is not so much what Donald Trump has said, but that there are people following him.

“Donald Trump can think whatever he wants, he’s allowed to,” Khemici said “But what is scary is that the polls are showing that there are a lot of other people that think the same way he does.”

“We’re Muslim so what? Don’t judge us on what other people are saying,” Khemici said.

Deena Abdelwahhav, a 16-year-old SFIS Sunday school student, feels more obliged to educate people that Muslims are not what Donald Trump is saying they are.

“We had a human rights assembly and I said a poem about being Muslim, about how we are and how we’re being judged,” Abdelwahhav said. “I feel like I need to express Islam more to everyone else to counter everything that Donald Trump is saying.”

The principal of SFIS says many of the high school kids have asked him how they should deal with stereotypes. Abdullah reassures his students to continue being themselves and to not stray from being who they are as individuals.

“We want them to be proud to be Muslim and to be their own individuals,” Khemici said.

Yet progressive areas like San Francisco do not pose as much of a threat to Muslim youth as other parts of the world.

“The fact that we live in the Bay Area, everyone is really supportive and everyone just welcomes each other,” said Noreen Shaikh, a 17-year-old SFIS Sunday school student said. “That’s why I think we don’t face that much negativity here because San Francisco is so liberal.”

Similarly, 15-year-old Noor Abuzahriyeh has found comfort in her peers in lieu of the unfortunate circumstances.

“What Donald Trump is saying is really negative especially towards Muslims, but the one thing that has come out of it is I get more support,” Abuzahriyeh said. “A couple months ago my health teacher [at Westmoor High School] asked how I was doing and checked in with me.”

Although some Muslim youths feel more empowered to prove the stereotypes wrong, others are embarrassed of their faith.

The main concern these students have is that they are not taught about current events around the world. Many of them are taught about historic events but not how they compare to today’s issues.

According to some SFIS Sunday school students, when they are at their daily schools they do not feel as threatened as when they are out in the public with people who do not know who they are.

“My mom says to not use public transportation by yourself or to only go with your brother, because if you’re out in the open then who’s going to help you,” Abuzahriyeh said. “We always have to be on the lookout because more and more people are believing him (Trump).”

SFIS is their place to gather and be comfortable with who they are. Not only do they speak about religion, but about their struggles and how to deal with them.

“We’re like family,” Shaikh said. “We’re able to tell each other anything. We talk about current events and share our experiences. As Muslim youth we’re able to share our struggles together and it makes us feel like we’re not alone.”

On March 13 the SFIS youth group went on about their usual business like any other youth organization.
“You can still turn in clothes and diapers next week for the drive,” Abdelwahhav said. “Remember to bring your signed permission slip to go rafting, and wear comfortable shoes!”