Caffeinated Culture: Ethiopian Tradition in a Cup of Coffee 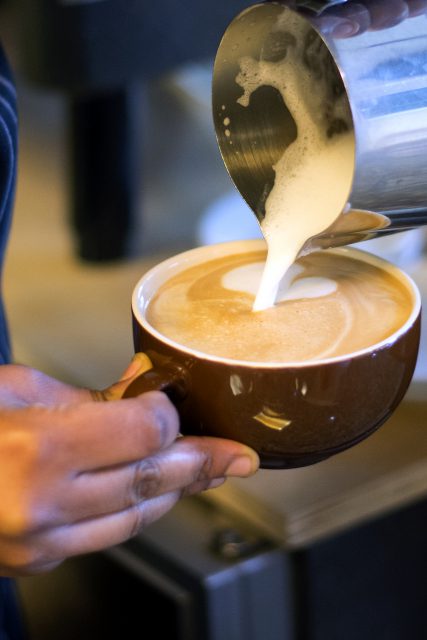 It was in Addis Ababa, the capital city of Ethiopia, where five-year-old Alex Assefa had his first sip. His house was packed with relatives and his great grandmother was hosting a traditional roasting ceremony. She spent hours roasting and brewing fresh indigenous beans from her native region of Jimma in south-western Ehiopia, where the crop grows wild. It was Alex’s job to collect the small, handleless cups after his great grandmother served the third and final brew. When her back was turned, Assefa gave in to his temptation and took a drink from what was left in the cups he gathered. The flavor overwhelmed his taste buds, but Alex had satisfied his curiosity and found his true passion in life: coffee.
Thirty-one years later and he is sneaking sips of coffee to his children while his wife’s back is turned, hoping to develop their palate at an early age.
“I look back on it and I just have the greatest affection for the culture I grew up in, the greatest fondness for a lot of the values they instilled in us.” Assefa said. “It’s not easy, but I just hope for at least a portion of it to be passed on to my kids.”
The San Francisco coffee scene, with its corporate coffee chains and trendy cafés serving five dollar cups of coffee, was interrupted when Assefa and his wife, Belen G.yesus, opened Zo11 Coffee Traders, a modest café on Fillmore Street offering the authenticity of Ethiopian coffee culture at an affordable price.
“We offer a portion of the traditional coffee experience,” Assefa said. “A lot of it is… engaging people in the culture, the background, and the story of the farmers that grow the coffee and the effort that goes into it. It is building a deeper connection with people, other cultures and other customs. By its nature, it [coffee] lends to that.”
At Zo11, customers get a cup of coffee and a lesson on the geography, flavor and science behind the very bean that composes their beverage – all for less than the price of a gallon of gas.
“Everywhere you go now in San Francisco is just overly pricey,” G.yesus said. “We could have done that, but you have to include everyone. We still make profit but it doesn’t mean you have to charge an arm and a leg to sell your coffee.”
Like most cafes, Zo11 places great emphasis on their coffee, but it is their Ethiopian hospitality that sets them apart and stimulates their patrons as much as the caffeine in their Sidamo roast.
“When you have a very welcoming environment it doesn’t matter if you serve just water or if you serve caviar, people are going to come because they like the service. So that’s our main goal, aside from the coffee, to be welcoming because that’s the kind of environment San Francisco used to have in a café. We wanted to bring that old San Francisco back.”
Zo11 gets its name from the numbers “zero one one” that are dialed when calling out of the U.S., and in Alex and Belen’s case, the numbers they dial to order their shipments of the finest variety of beans from across the world. Whether from Ethiopia, Mexico or Colombia, the flavor of the bean is contingent on the way it is roasted.  In this spirit, Zo11 also offers fresh green coffee beans for customers to roast themselves.

“We do a wide range of roasts, and in most cases we let the coffee dictate how it should be roasted,” Assefa said. “The coffee bean is basically a capsule. It captures the air where it’s been grown, the river and lakes it’s watered by, and the hands of the region that touched it. It [roasting] is like unlocking the coffee beans.”
According to Assefa, there are no regulations on coffee, so even though cafés claim a specific roast, they could be mixing a few, quality beans with a majority of inferior beans to yield a light roast. He aims to reverse this trend by providing customers with an opportunity to experience premium coffee as a bridge between cultures.
“We intentionally go out of our way for our customers to recognize, taste and remember where the coffee bean comes from,” he said. “You are building your palate and you are building your own library of taste. That’s the beauty of coffee–it takes you places. You become more intimate with the people and the cultures.”
There are other coffee shops in San Francisco, like Ritual Coffee Roasters, that are also pushing to spread coffee consciousness. Zo11 is not unique in its dedication to roasting fresh coffee, but it does provide a neighborly environment, emulating the familial traditions of G.yesus and Assefa’s heritage.
“In SF you kind of go to places to be seen,” Paolo Picardo, a regular customer at Zo11, said. “I’ll go to Ritual and everyone is hip and dressed very cool, but at Zo11 that doesn’t exist. It is a safe place I can go to and center myself. There is no real superficiality coming out of it.”

At Zo11, the customers are as diverse as the variety of beans the café roasts. On the average day, elderly Ethiopian residents come in to connect with their community and college students go to cram for their tests. Most people are regular patrons as the coffee keeps them coming back, and for newcomers, the experience is as enticing.
“Initially walking in you see a different environment and culture,” said first-time patron Sean Willard. “The coffee I picked was the Ethiopiano and I inquired about the background. I think it’s important because it adds a specific story. He does his own roasting here but he gets the stuff from Ethiopia so that’s more specific to me.”
It is the social exchanges, the cultural discussions about coffee and the customers’ response to the bold flavors that maintain Assefa’s fervor for coffee.
“Sometimes I will just pour a cup of coffee and look at the person taking their first sip,” he said. “Over time you become addicted to that constant reaction. It’s like being a singer and people screaming your name and applauding. It’s that type of feedback that’s the joy of it.”
Watching Willard take the first sip of his Ethiopiano, a smile blossomed on Assefa’s face.  He had made a human connection with a stranger over a shot of espresso and some steamed milk. Assefa was living his dream–using coffee as a catalyst to build a cross-cultural community under the roof of his own business.