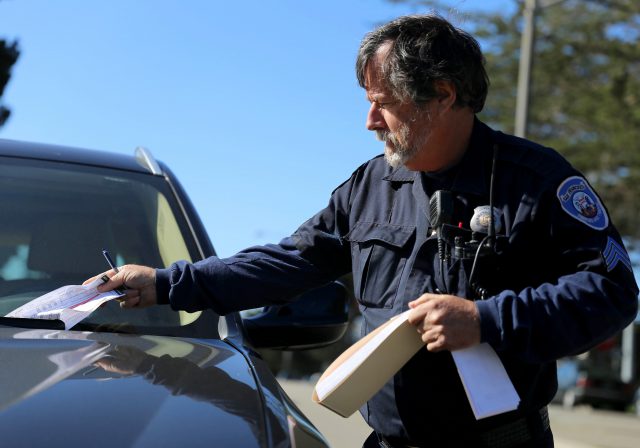 When I got out of class, a small white envelope was waiting for me on the windshield of my car. I could feel my lungs fill with dread and my face glow red as I read the parking citation, issued at 12:42 pm. I checked my phone: it was 12:46. I wanted to scream. I wanted to cry. But for the time being I did neither.
This overwhelming sense of crisis came from the eight parking tickets I had already received this month. In fact, the large sum of racked up costs from the tickets had prevented me from paying my pricey San Francisco rent on time; I knew that the last thing I needed was another ticket.

In the heat of my frustration I jumped in my car and chased down the parking enforcement officer in a most ungraceful fashion. After a few minutes of begging and justifying my way out of the $78 parking ticket, I stood in front of the officer feeling bare and helpless, palms shaking, with a look of desperation in my watery eyes.
“Just don’t cry!” the agitated parking attendant said as he ripped the parking ticket from my shaking hands. “I already had someone cry this morning and I can’t do it anymore.” He appeared to me as a weary worker, an afflicted professional, and — most importantly — a forgiving gentleman.

“Thank you, thank you! You don’t know how much this means to me,” I gasped as I fought the urge to give him a friendly and appreciative hug. From our brief encounter that sunny afternoon I never got his name, but I surely did not forget his simple act of kindness.

If you’ve ever had a car in San Francisco, chances are you’ve shared a strikingly similar experience and probably received your fair share of little white envelopes underneath your wipers. And if you’re anything like me, I’m sure you’ve been left wondering where that hard earned money went. After not being able to pay my rent that month, I decided it was imperative for me to find out exactly where the city is spending the revenue from parking and meter citations and how it was — supposedly — coming back to me. The first thing I discovered is that San Francisco has the highest ticket and meter prices in the United States. For example, a parking ticket in Boston — a city of similar size and geography as San Francisco but with a slightly smaller population — will run at $25 for an unpaid meter and $40 for street cleaning. In San Francisco that same ticket will run you $78, a rate that has shown steady increases over the last several years in order to pay for increased enforcement and maintenance. These exorbitant prices tower even in comparison to an urban hub such as New York, where a street cleaning ticket begins at $45 and, in some areas of pricey Manhattan, can go up to $65.

Information provided by San Francisco Municipal Transportation Agency (SFMTA) spokesman Paul Rose shows that the projected outcome in parking fees and citations will be over $311 million dollars this year. This money will go back to the SFMTA and City of San Francisco, and a large percentage of it will go toward public transportation maintenance and paying SFMTA employees.
“There’s operations and there’s capital,” said San Francisco State University Geography and Environment professor Jason Henderson, who specializes in urban politics and transportation.

Because the local government has to find a way to pay for operations, they have used parking revenue as part of the budget since 1999, with the vote on Proposition E giving wind to a new Municipal Transportation Agency that would have greater power and control over standards and budget. However, the use of parking revenue only covers about 35% of the operations budget on average.

Reports provided by the City and County of San Francisco show that public works, transportation, and commerce is the largest area of spending and revenue for the city of San Francisco. The SFMTA is both the greatest source of expense at $1,067,863,751 dollars, with a revenue of $1,075,713,302. These numbers are almost impossible for most to fathom, simply put they mean that the city has generated a revenue of almost $8 million dollars from the public transportation agency within the 2015-2016 fiscal year.

After having a greater understanding of where and how the parking citation revenue is used, I wanted to hear from parking enforcement officers on the ground about the labor of their job and the significance of parking tickets. I sat down with Bill Kettle, a SFMTA parking control supervisor, while he and his team caravanned through the streets writing citations as a street sweeper followed behind us.

“That whole thing with, ‘Oh you guys have a quota’… Look, we don’t have a quota,” exclaimed Kettle as he broke down the myths of the job. “Trust me, I’d far rather not have to ticket anyone at all. But that has never happened.”

Considering that street cleaning is by far the biggest source of ticketing in the city, many have come to believe that street cleaning is useless and essentially a conspiracy to make the city money. Although it is fact that street cleaning tickets wind up generating a pretty penny for the city, there is some important value to be recognized in why we should have to move our cars every week for a truck to blow past as it moves around dirt and trash. According to the San Francisco Public Works office, the city’s street cleaning team covers 150,000 curb miles and removes 25,000 tons of litter and debris every year, which would otherwise wind up polluting the Bay.

But preserving the environment isn’t the only reason we should have to feel obligated to abide to street cleaning. Supervisor Kettle stands by the benefits of street cleaning when he explained that, “the good thing about street cleaning is that if we don’t come by the streets will fill up with abandoned and stolen vehicles. Actually we find the most stolen vehicles, because we are out here consistently.”

Despite my initial outrage and shock after enduring a month long ticket hail storm, I have come to some surprising conclusions about parking tickets in San Francisco. What I found is that the tickets in San Francisco, although overpriced, are not entirely unsound and in fact they may be necessary in shaping our cities local environment. That being said, I’ve found that the best way to prevent these pesky penalties is relatively obvious: be observant and cautious when parking in the city, and hold our local government accountable as part of the process to create fairer and more feasible pricing and policies.

And as for now, my days of parking in the city are long gone. I traded in my car keys for a clipper card and bicycle, which, I’ve found, is even more effective to avoid parking tickets than chasing down meter maids.