Choosing Freedom — A Story About Overcoming A Life Sentence 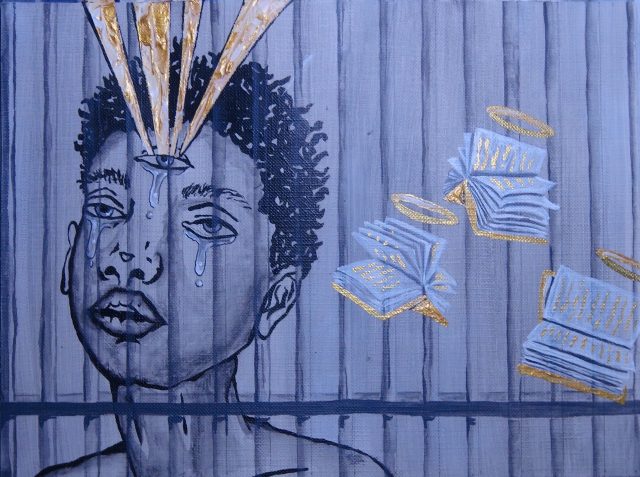 At first, transitioning had its difficulties for Curtis Penn, a San Francisco State University student. He’d turn the shower on and commence the activity fully clothed, water seeping through his shirt layers. His feet were adorned with shower shoes — a familiar comfort of separating his skin from whatever pathogens lay hidden in a dirty floor. The shower was clean that day, but memories of prison grime were still fresh. Even with this new-found personal space, Penn was still not comfortable enough to proceed without old habits. Before washing himself, he’d wash the clothes on his back.

“There is not really a transitional period to learn certain skills,” Penn says. “For a long time I would always shower with shower shoes, and I would always do my laundry in the shower. I was used to it.”

Penn spent a significant amount of time as a young Black man in and out of different correctional facilities. This fate however, would not determine the outcome of Penn’s existence.

According to John Burris, a prolific California civil rights and discrimination lawyer, systematic oppressions are in play to steer people of color down a life of perpetual incarceration.

“You get into the system because of a minor event,” Burris states. “You get on probation, you have a search clause, and you’re targeted after that.”

Although Penn was directed down a path of lifelong incarceration, he was able to overcome his bondage — and academia was the impetus.

“I know my first encounter with a government entity was not volunteered –– it was invasive,” spoke Penn, a graduate student at SF State.

Penn is also a representative of Project Rebound, a supportive and rehabilitative group aimed at turning people who have incarceration backgrounds into successful students. Penn was able to utilize their resources, such as academic program advising and mentoring, to create a network of people that functioned as a support group in helping him reach his academic goals.

“You cannot ignore the socioeconomic component that is attached to Black youth,” Penn recalls. “[My first encounter] I was walking down the street –– the police stopped me, asked me where I was going. And from very early on you get an us-against-them mentality. I was only fourteen years old.”

The early and unpleasant experience with law enforcement that Penn recollects is not uncommon. Neighborhoods of color are policed more heavily and more aggressively than those with white residents. In a study from 2010 to 2015 executed by the justice department in Baltimore, people identified as African American were stopped nearly three times as often as those identified as white.

“We know it is due to the way we look,” Penn states firmly. “We aren’t given a fair shake and so because of that we are often placed in a ‘Lion in the Jungle’ type scenario –– where when you are the most hunted, you take on the persona that you are the most feared.”

In Penn’s experience, negative relationships between law enforcement and people of color are built at a young age, and funnels for the school-to-prison pipeline –– a term used to describe the incline in police presence, and by virtue, early student contact with the criminal justice system through schools’ zero-tolerance policies — are actualized.

“The school pipeline is a function of kids not getting educated in the very early stages of their lives –– first grade, second grade, third grade,” Burris says. “By then they have fallen behind in reading. By the time they get to late junior high, they drop out of school. The consequence of that is they end up in the drug trade or petty crime. And again they are on the treadmill to first juvenile hall, and later to county jail, and later to state prison, and the whole activity repeats itself.  It’s a failure to educate kids early and give them something to hope for.”

“We aren’t given a fair shake and so because of that we are often placed in a ‘Lion in the Jungle’ type scenario –– where when you are the most hunted, you take on the persona that you are the most feared.” -Curtis Penn

According to Victor E. Kappeler Ph.D, associate dean of the School of Justice Studies at Eastern Kentucky University, the connotation that people of color need to be overseen or policed at a higher rate is easily traced back to the plantation era. In his article, “A Brief History of Slavery and the Origins of American Policing,” he states that, “slave patrols and Night Watches, which later became modern police departments, were both designed to control the behaviors of minorities.”

This mistreatment is reinforced and perpetuated today, as even in urban elementary and middle schools, armed police officers are utilized as disciplinarians able to arrest and book young people of color. In April of this year, an armed, white officer was captured on video after picking up and body-slamming a 12-year-old girl from Rhodes Middle School in San Antonio, Texas.

According to the Southern Poverty Law Center’s article, “SPLC: DOJ settlement in school-to-prison pipeline case will protect Mississippi children,” children were being “needlessly pushed out of school and into the justice system.” With the support of the SPLC, a few states like Mississippi have been forced to break down components of the school-to-prison pipeline. In these states it is illegal to arrest a minor for an issue that would normally be addressed and disciplined by the school.

Penn believes the unequal policing of the Black body has built mistrust, and created the space for deteriorated relationships with police in their communities. Excessive prison minimum sentences and the three-strike rule –– which applied initially to both violent and non-violent crime — has sent hundreds of thousands of people of color to jail for large percentages of their natural life. According to data from the the Justice Policy Institute, Black people make up 6.5 percent of California’s actual population, but manage to make up 30 percent of the the prison population, and a staggering 44.7 percent of those are sentenced to life following the three-strikes law.

“I was sentenced to life in prison under California’s three-strike rule for second-degree commercial burglary,” Penn says.

He is sitting on the floor. His posture is upright and his blue jeans are hemmed right above his green and white sneakers. He has his back to the window, aware of every movement in his surroundings. He speaks with confidence.

“I didn’t give up hope,” Penn utters with poise. “Although I had a life sentence, I knew that the crime for which I was given a life sentence for, did not warrant a life sentence. In fact, I could have done community service for it.”

It wasn’t until 2012 that Penn was released under California’s Proposition 36 reform to the three-strikes law. The new law mandated that a violent crime must be committed in order for life to be the minimum sentence. Penn spent fourteen years and six months of his life incarcerated for the burglary.

Penn’s face doesn’t carry the hard look that one would imagine someone who spent over a decade in prison would have. His deep brown melanin has maintained his skin well. Penn is in his fifties, but his lost time is not reflected in his appearance. He has a short tapered haircut and tight brown eyes that fixate eloquently as he speaks.

As he made his way from a child to a young man, he felt that blackness superseded his talents and abilities. In Penn’s experience, job opportunities were undignified, no matter how hard he worked.

The first experience Penn had in the workforce was not pleasant. According to Penn, these jobs were, and still are, often demeaning. They were presented to him with limited options. At the time, all of the job offers consisted of a glass ceiling that left him without upward mobility.

“I worked as a dishwasher through the summer,” Penn recalls. “I told them I wanted to be a busboy. I had two or three summers of dishwashing and I would see white high school students, my peers, and right away they would get the job as the busboy. The only alternative I had was to be a dishwasher or quit. That young, it weighs on you to realize that you are at a disadvantage.”

Penn nods his head. It is subtle; it is a nod to the acceptance that came along with age, and knowing it’s possible to overcome the obstacles that were presented to his past-self. Eventually growing tired of watching his white counterparts get the job he deserved, Penn quit. Not too long after, he was formally familiarized with the criminal justice system and found himself with limited options. He decided to dedicate himself to education.

Through the Prison University Project in San Quentin State Prison, Penn was able to finish the necessary credits needed to transfer to a four-year university.  The project helps inmates take classes that are in conjunction with accreditation and are UC transferable.

“I forced myself to believe I was a student as opposed to an inmate or a convict,” Penn says.

After he was released, a liberated man with no probation or parole, he submitted an application to SF State’s Project Rebound in hope to further his education. Penn is one of many success stories that came out of Project Rebound. The non-profit works closely with formerly incarcerated students like Penn to keep their lives on a positive path and to achieve academic success. He believes that one of the key components to the project’s success is the system of formerly incarcerated peers that lean on each other for excellence. Eventually Penn received his Baccalaureate in sociology from SF State and is currently working on a master’s in public administration with an emphasis in public policy.

Penn keeps in contact with old comrades who weren’t afforded the privilege of overcoming their circumstances. He continues to help incarcerated Black youth reach their potential by educating them on the possibilities available to them outside of cold prison walls.

“One day in jail is too much,” Penn says. “Education helps ease some of that time.”