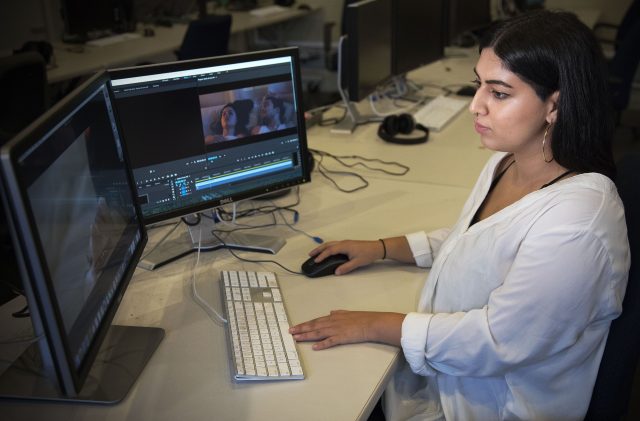 Reaa Puri edits footage from her narrative short film "Cycles of Lune" in a film lab at University of California, Berkeley. Puri is both a documentary and narrative filmmaker in her last semester of studying film at UC Berkeley. Steven Ho // Xpress Magazine

Reaa Puri edits footage from her narrative short film “Cycles of Lune” in a film lab at University of California, Berkeley. Puri is both a documentary and narrative filmmaker in her last semester of studying film at UC Berkeley. Steven Ho // Xpress Magazine

On October 3, Fox News’s The O’Reilly Factor aired a “Watters’ World!” segment about the presidential candidates’ emphasis on China in the first 2016 presidential debate. The reporter, Jesse Watters, went to New York City’s Chinatown to ask people for whom they were voting. In the segment, Watters asked passersby if he needed to bow when greeting them, or if it was the Year of the Dragon, in between clips of Pat Morita and Bruce Lee, to the soundtrack of Carl Douglas’s “Kung Fu Fighting.”

In response to the segment, New York City Mayor Bill de Blasio tweeted, “The vile, racist behavior of Fox’s Jesse Watters in Chinatown has no place in our city. @FoxNews – keep this guy off TV.” Watters apologized via Twitter for the segment, saying, “My man-on-the-street interviews are meant to be taken as tongue-in-cheek and I regret if anyone found offense.” But within five minutes, the most-watched cable news outlet reduced several ethnic communities to outdated stereotypes commonly seen in American television and film.

And yet, as The O’Reilly Factor segment shows, the Asian-American experience in popular media consists of generalizations and single perspectives. In response to the “Watters’ World!” clip, The Daily Show’s Ronny Chieng points out, “If you’re going to be racist, at least get your stereotypes right … Karate isn’t Chinese, it’s Japanese, and you’re doing it in a taekwondo studio, which is Korean.”

The lack of well-rounded Asian, Pacific Islander, or Native Hawaiian characters in popular media can lead to unfair, one-sided representations in all media coverage. Biases perpetuated from television and film characters bleed into how people are treated off-screen, which the Chinatown segment on Fox News clearly demonstrated.

Berkeley-based filmmaker, Reaa Puri, watched a lot of television growing up, but says she never saw many Indian characters, or people who looked like her on screen. Puri identifies as a “third culture kid,” as she was born in Berkeley, but split her time between India, Kuwait, and the United States growing up.

“I think it made a huge difference in my psychology, and in feeling value and worth in the dreams and aspirations I had, just not seeing people like me,” Puri observes.

When it comes to the world of film, the percentage of films featuring Asian or Pacific Islander leading characters is staggeringly low — hovering around 5 percent, according to a study by the University of Southern California Annenberg’s Media, Diversity, and Social Change Initiative. That statistic, however, is higher than the percentage of films with people of Asian or Pacific Islander descent behind the camera — a mere 2.4 percent.

“I think there’s an issue with this corporate model of Hollywood that needs to change,” Puri says. “When you have a few studios dominating which stories are told, that’s a problem to begin with.”

Puri is pushing for the industry to change, starting at the top.

“I think there’s an issue with this corporate model of Hollywood that needs to change,” Puri says. “When you have a few studios dominating which stories are told, that’s a problem to begin with.”

Statistically speaking, that money is not coming from the North-American Asian community. According to a 2014 study by the Motion Picture Association of America, Caucasians make up 56 percent of what the MPAA calls “frequent moviegoers,” or people who see a film in the theater at least once a month, in the United States and Canada. Asians make up less than 9 percent of that population.

In a media climate where it seems the viewer has endless options, the variety within those options is bleak. The aforementioned USC report shows the representation of character gender, race, and LGBT status from the 100 top grossing films from 2007 to 2014, excluding 2011. The report found that out of the characters in those 700 films studied, only 5.3 percent were Asian, and less than 1 percent were Native Hawaiian or Pacific Islander — numbers that stayed consistent from year to year. In addition, only nineteen directors of those 700 films identified as Asian, and only one of them, a co-director, was a woman.

And these statistics only apply to film. A different study by the Annenberg School for Communication and Journalism shows that out of the 116 broadcast television programs tested, just over half of those programs had a character of Asian descent with a speaking role. The same percentage applies to the 138 cable television programs tested. The addition of streaming networks show more diversity, with only 63 percent of the 51 shows featuring a speaking character of Asian descent.

Puri believes this problem can start to be fixed in the writers’ room. When casting her own films, Puri depends on collaborating with people who can provide her with insight into communities with which she has no experience, in order to create diverse, fully-formed characters and authentic stories.

“It takes a little bit longer, but it’s so worth it in the end,” Puri notes.

Characters of Asian, Pacific Islander, or Native Hawaiian descent have a history of being cast to white actors. This is not a new concept — does Mickey Rooney’s egregious performance as a Japanese landlord in 1961’s Breakfast at Tiffany’s ring any bells? It doesn’t show signs of stopping either. Kubo and the Two Strings, an animated movie that came out in August, featured a primarily-white cast of voice actors to tell a story of a Japanese boy and his search for a storied samurai’s armor. White British actress Tilda Swinton was cast as a character who was written as a Tibetan monk in Marvel Studios’s Doctor Strange. Screenwriter C. Robert Cargill justified casting Swinton to not alienate international audiences, due to China’s tense political relationship with Tibet. And in the upcoming adaptation of the Japanese manga, Ghost in the Shell, Scarlett Johansson plays Major Motoko Kusanagi — now referred to simply as “Major.”

And these are only a few examples from this year; two of which have yet to be released in theaters.

Lim, who came to the United States from Singapore in the late 1980’s, learned the ins and outs of filmmaking from working in a public-access television studio. She explains that she took part in a program that allowed the public to come to the studio and learn how to use their equipment. Lim spring-boarded from there to film school, and graduated from San Francisco State University with a bachelor’s degree in cinema.

“The film industry is made up of the status quo,” Lim explains. “It’s mostly straight, white men who are working in the industry and behind the camera, in front of the camera, so they’re going to write films that reflect them. And unfortunately because there are no other representations, their stories become the norm.”

For the last sixteen years, QWOCMAP has provided a space for filmmakers — specifically women of color, cis and trans to learn how to use professional film equipment to tell their stories in the highest possible quality.

“Filmmaking … is a really expensive medium,” Lim says. “Hollywood films, now they’re going for basically about $1 million per minute — a ninety minute film is about $90 million.”

However, through QWOCMAP, the filmmakers can access high-quality equipment and personal instruction for free, therefore eliminating the economic barrier.

“For me it’s really about nurturing filmmakers from our own communities and giving them those opportunities, giving them the skills,” Lim says.

During its existence, the non-profit has fostered more than 400 filmmakers from all over the world to produce their stories. Lim’s goal is for QWOCMAP to be one of forces to generate permanent change in the film industry.

Puri thinks that collaboration and support on all levels, from executive to viewer, can lead to a more diverse media sphere.