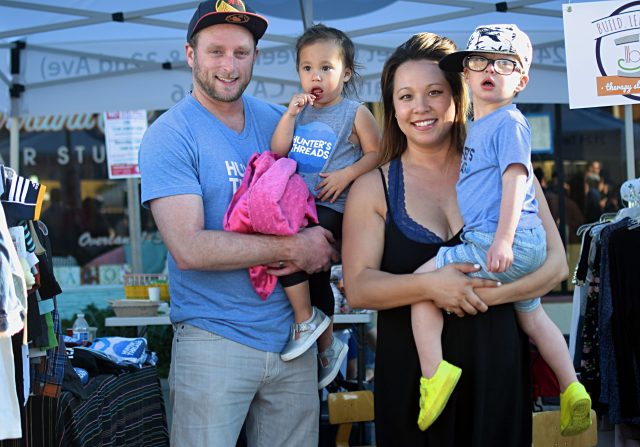 It’s a sunny Wednesday afternoon in the Sunset District where a breeze enters through the bright ruby door of Hunter’s Threads on Taraval Street between 31st and 32nd Avenue. In the store, Michelle Huang Scott rests on a stool as a man comes in with a mountain of bags containing used children’s clothing and toys. Without hesitation, she jumps out of her seat and helps him bring them in.

Huang Scott and her husband, Jody Scott are the parents of Hunter, a three-year-old blond boy with hypotonia. Hypotonia is a state of low muscle tone which often involves reduced muscle strength — it’s commonly known as “floppy baby syndrome.” The Scotts noticed that their son wasn’t progressing at the same rate as kids his age.

“As Hunter started growing, I noticed delays and other little things like the dexterity in his fingers when he’d eat was different,” Huang Scott, mother of two and founder of Hunter’s Threads says. “He was past two years old when he started walking, his eyes would go in, his head was floppy and he wouldn’t speak.”

She expressed her concerns to Hunter’s doctor, but the doctor said, “It’s fine, that’s normal. He’s just on the later spectrum of things.”

However, Huang Scott didn’t think this was normal, so she started advocating for Hunter. Whenever she went to the doctor, she’d tell them that something was wrong and how she thought Hunter needed help with moving, speaking, and eating.

“Finally, I just begged,” Huang Scott says. “I need to see a physical therapist, speech therapist — all these things I had to really push my doctor for. It wasn’t anything about her, I love my doctor. I knew Hunter was a happy and healthy kid, but something was off.”

Unfortunately, the resources that their healthcare provider, Kaiser Permanente offers is limited so Hunter’s doctor gave Huang Scott a referral from a third-party, state-funded program.

“In order for me to receive those services, I had to be denied at my own hospital,” Huang Scott says. “Kaiser would provide some services, but it was very limited and they didn’t think Hunter needed it.”

The Scotts went through multiple assessments before Hunter could enroll into third-party services. They took time off of work to figure out schedules and manage all the paperwork involved. After five months, Hunter was enrolled in therapy, but he was then two and a half, and was behind in development for his age.

According to the Urban Child Institute, a non-profit organization dedicated to promoting the health of children, “Between conception and age three, a child’s brain undergoes an impressive amount of change. At birth, it already has about all of the neurons it will ever have. It doubles in size in the first year, and by age three it has reached 80 percent of its adult volume.”

When Hunter turned three, his therapy stopped because the third-party program ends developmental services for children at that age. The therapists told his parents to go back to their healthcare provider for other resources.

It was back to the same cycle of meeting with alternative services and going through assessments for Hunter. It would be months before they could get access to therapy for Hunter again. At this point, his mother decided to do out-of-pocket services because she couldn’t prolong Hunter’s therapy.

Hunter is Huang Scott’s first child. As any new parent, she’s learning. Throughout her journey, she’s seen how much time and effort is required in order to access such resources for children.

“In my heart of hearts, everyday I would go home and be so sad because I knew I had access to a car, I knew how to work the internet, I knew how to fill out these forms, I’m very tenacious and a go-getter,” Huang Scott said. “But what if the parents don’t speak English or have access to a vehicle? What if it’s a single-family home? There were just so many ‘what if’s?’ that I’d get sad about it.”

Huang Scott isn’t the only parent that’s encountered troubles of accessing therapy for her child.

Meilani Connolly, a pediatric occupational therapist at Build.Learn.Thrive., understands the struggle and need for such services. Just like Huang Scott, she’s a mother of two with a son who needs speech therapy. Fortunately, with fifteen years of experience under her belt, she knew what symptoms to look for early on, but not all parents do.

Connolly treats developmentally delayed children and works in the Pre-K Assessment Team for San Francisco’s schools. While working with children and their parents, she’s noticed a high demand for services but lack thereof.

“I’ve been working in schools for the past five years, assessing kids and parents who don’t have access to services,” Connolly says. “It’s difficult for them because they don’t know where to start or how to go about receiving services.”

On top of that, the cost of services is high unless it’s covered by insurance or can be paid for out of pocket. Therapy costs vary from five dollars to three hundred dollars per session, depending on the type of therapy, expertise of the therapist, and office location.

Prior to Hunter’s therapy sessions, Huang Scott enjoyed shopping for her two children, but with the high costs of services, she realized that she couldn’t be spending money on clothes anymore — that money had to pay for therapy, which is the reason Hunter’s Threads was created.

Community organization is in Huang Scott’s blood. In 1984, her parents started the non-profit organization, San Francisco City Impact. By watching her parents’ compassion shine through caring for the homeless and starting a school for inner-city kids, it’s inspired her to start her own organization.

“I’ve been friends with Michelle for years and to see how much she’s put into this is incredible,” Nicole Richardson, friend and employee at Hunter’s Threads says. “She really wants to provide a space where kids can easily access the therapy they need to thrive.”

Hunter’s Threads is a for-profit organization that sells used-children’s and women’s clothing along with their own branded merchandise. A portion of sales goes towards providing free therapy for children.

The organization partners with Build.Learn.Thrive., a devoted group of experienced speech and occupational therapists who specialize with assessing children in school settings. Services will start in 2017 with speech and occupational therapy, then move into physical, music, and art. Parents interested in therapy for their children are able to sign up in store or online. Sessions are currently on a first-come-first-serve basis.

“By providing therapy through Build.Learn.Thrive., I hope parents won’t have to face the barriers of obtaining services like I did,” Connolly says. “For me, having a son who needed a speech therapist and not having it be accessible, I understand what parents are looking for.”

Therapy will be held through play-based groups for fifty minutes each; forty minutes will consist of direct contact with a therapist, and the remaining ten minutes of a question and answer with the child’s parent(s). Group placement is determined by a child’s age and developmental history.

Occupational and speech therapists will lead the play-based groups. They’ll primarily focus on social, developmental, and writing skills along with high-interest content themes like dinosaurs, fire trucks, and letters.

As Hunter’s Threads makes a name for itself in the community, Scott hopes to change the misconception of children’s therapy. For those who are raising a child with developmental delays or aren’t aware of the drawn-out process, there’s this idea of therapy that’s often looked down upon. But when the full picture is recognized, it shows how these services can ultimately benefit a child for years to come.

“I don’t want us to be seen as a charity case,” Huang Scott says. “I really want people to be advocates for these kids and a part of the therapy culture.”