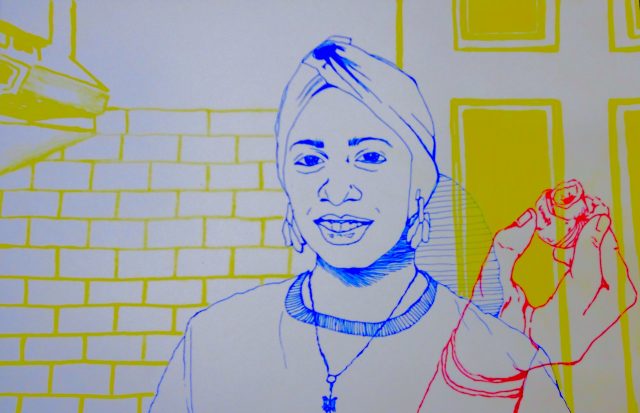 The idea to do a cross-country, fifty state tour in fifty-two weeks all started three years ago in the dead of winter. Yana Gilbuena was living in a loft in Redhook, Brooklyn. She suddenly had a craving for arroz caldo, a traditional Filipino ginger-spiced chicken porridge. But getting her fix for a typical Filipino dish wasn’t going to be easy because there wasn’t anyone in the city who made it.

“I was getting frustrated at the fact that this is New York City and why can’t I have my own comfort food?” Gilbuena questioned. “And that just occurred to me, that despite the fact that it is a melting pot, there’s still a lot of Filipino cuisine that needs to be out there.”

So she did the only logical thing that came to mind: She hosted her own pop-up dinner featuring a five-course meal of authentic Filipino food, accompanied by a traditional communal dining experience known as Kamayan — where food is served in heaps, lining the middle of the table on banana leaves, and guests are asked to eat completely with their hands.

Gilbuena was overwhelmed with the success of her first pop-up. She originally planned for twenty-five people to show up, but instead, forty-five guests came to her dinner. Luckily, she had over-compensated with the amount of food she purchased, and was even able to provide seconds when people asked.

The experience was everything she imagined. People couldn’t get enough of her Filipino food and the conversations carried throughout the night.

Thus, started the SALO Project — a mobile, underground Filipino pop-up series centered on a Kamayan style of eating. SALO, in the language of Tagalog, is a derivative of the word “Salu-salo,” meaning big party or gathering. SALO, with a different inflection, may mean “catch,” hence, Gilbuena’s tagline: To catch and to gather.

The main goal of the project is to create and raise awareness of Filipino cuisine and to highlight the food by focusing on the flavors of its three regions: Luzon, Visayas, and Mindanao. But the self-dubbed “gypsy chef” has her own personal quest. She wants to broaden people’s palate by bringing a unique, cultural, and social dining experience to hungry people across the nation.

Gilbuena points out that her pop-up dinners encourage people to not only indulge in the food, but to converse with each other, even if they are strangers.

“I think the main thing that attracts people to the Kamayan experience is the fact that it’s very different from the rest of pop-up dining in general,” Gilbuena points out. “And I think it appeals to a lot of our senses. There’s the tactile part, there’s the visual part like how the food is laid out on banana leaves, and then you’ve got the smells. It interacts with each other. And you’ve got the taste that’s got to come with it. And being able to like sit on a long table with a bunch of strangers and make friends as you go — it kind of forces you to do that.”

Gilbuena was raised in the Philippines by her grandmother and grew up around traditional Visayas food. She learned how to cook, but never considered it a passion. After finishing her undergrad in the Philippines, she moved to Los Angeles for a couple years before ending up in New York. Gilbuena was doing pop-up dinners as a side hobby, but when she got laid-off from her full-time job, she took it as a sign to drop her original plans and pursue the pop-up lifestyle.

Gilbuena gave up her lease in New York, sold all of her belongings, and whittled down what she needed to a backpack, cooking utensils, and a bicycle. Her plan was to make the tour as minimalistic as possible by strictly traveling by bus or train. Gilbuena committed to couch-surfing at people’s homes, tailoring the menu to the local and seasonal ingredients in each state, and relying on the kindness of strangers’ hearts to make her plan a reality.

“I don’t think I would consider a certain place home,” Gilbuena says. “I thought for the longest time it would still be New York, but I’ve been away from that city for such a long time that a lot of my friends who I knew, who are kind of like my anchor, have moved already to other cities and made their homes in other states. So I would say home is wherever my backpack lives.”

For many of the states that she visited, Gilbuena often didn’t know the area at all or anyone in the cities. In order to make her pop-ups successful, Gilbuena came up with several ways to ensure people would come to her dinners and also make her limited time in these places enjoyable.

First, Gilbuena visits the local coffee shop, checks the cork board for any upcoming events, and asks for advice from the locals themselves. Next, she goes on social media and checks the popular hashtags.

“Let’s say when I’m in SF,” Gilbuena explains, “I would search #SFfoodie and see where people go, where they go to dine, and where they go out for drinks and all that stuff.”

Then she goes on Tinder. Instead of using this dating app for intimate conversation, Gilbuena uses it as another avenue to converse with people around the area and get their advice on places to eat or visit. Lastly, she’ll pick up the local publication and browse through it for any other tips and hints that will help her better understand the city.

Gilbuena’s latest collaboration was with Janice Dulce, head chef of FOB Kitchen — a permanent Filipino kitchen operating out of The Gashead Tavern in the heart of the Mission District. They cook authentic and traditional Filipino dishes, using sustainable meats and organic ingredients. Dulce and Gilbuena met through Facebook and decided to collaborate for a pop-up dinner at Nevada’s Black Rock Desert for Burning Man, an annual event dedicated to art, music, and self-expression.

“We hung out, I let her borrow some costumes, I went to her pop-up,” Dulce reveals. “And I asked her one day … ‘So if you ever need a place for a pop-up in San Francisco, I have a space …’ and she says, ‘You know what would be even better, is if we do a collaboration,’ and I said, ‘Let’s do it.’”

In order to prep for the dinner, Gilbuena did most of the grocery shopping the morning of the event. She sourced the fresh and locally grown vegetables at the Farmers Market at the Ferry Building, the seafood at a small Mission market close to her apartment, and the remainder of the protein at a local grocery store. With Gilbuena and Dulce both focusing on traditional Filipino flavors, it wasn’t difficult for them to mesh together for the event.

“I think our style, the way we compare is that she keeps her food very authentic and very rustic,” Dulce explains. “And I feel that my food is also very authentic. It’s not really much of a fusion kind of thing but keeping it very traditional.”

As the 6 p.m. dinner approached, people entered the small bar and restaurant. The event was capped at thirty-five people, and in fifteen minutes the place was completely full. As Dulce and a waiter stopped by each table to line it with a layer of banana leaves, curiosity and anxiousness were evident on people’s faces. Conversation filled the restaurant and the noise level went from a hum to a dull roar.

Gilbuena soon came out to place each course on the middle of the tables, her face still shining with sweat. As soon as she finished serving the guests, she came out of the kitchen to talk to each and every person.

First on the menu is salmon kinilaw — a fresh ceviche accompanied by colorful shrimp chips. Next is a Filipino ox-tail stew with a peanut base known as kare-kare, followed by Dulce’s signature crispy pata, which is three-times cooked and served with a crispy rice and a Thai chili soy vinegar. Lastly, Dulce and Gilbuena work together on the dessert — a coconut and corn pudding known as mahablanca.

“What inspires me are nights like these,” Gilbuena concludes. “Also, the mere fact that I want to share with everyone culture through food and that’s something that I’m very passionate about … Everyone can benefit more from having communal dinners and having more Filipino food in their lives. I love making these communities wherever I go, and being able to connect with them even after I’m gone.”