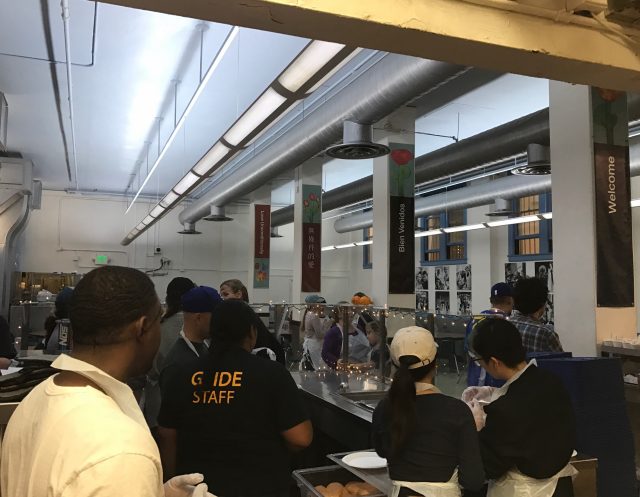 San Francisco is a city that is socially and economically diverse. To an outsider, this intersection of classes may seem abrupt, but to those who have spent any time in San Francisco, it’s a natural reality. This is something that can be seen in the way the Tenderloin — an area notorious for its homeless population — flows almost seamlessly into the next blocks, where one can suddenly find themselves amid the Hilton hotel, and the bustle of Union Square shops.

An average day for a San Franciscan can be isolating in ways. Many start their day on public transit, where hundreds can be seen putting in their white Apple headphones almost simultaneously as if to say, “I’m tired, and haven’t had my cold brew yet. Leave me alone.” They work in offices or spend their day bouncing through classes associating, yet remaining impersonal, grab salads to-go to eat at their desks instead of gathering for lunch, and flicker through their smartphones instead of socializing.

“We’re dependent on others from infancy to feed us,” Robert Avila says thoughtfully as he outlined the meals service program at GLIDE, a memorial church in San Francisco that serves over 2,000 meals a day to people who may not have accessibility to food otherwise. “Food is something so basic, everyone can talk about a meal together. It’s common ground. It’s a place where people bring their cultural and ethnic knowledge around food, and share it.”

Avila speaks with passion and candor about the meals service program, as he sits alongside George Gundry, the director, who on-watches with evident respect for his colleague. Understanding the communal act of eating — from GLIDE’s extremely successful meals congregate program, to The Progress, a restaurant a 13-minute bus ride away — is a humanizing and unifying way to connect socially.

Stuart Brioza and Nicole Krasinski started The Progress in the historic Fillmore district in December 2014. They have found quick success as chef proprietors, and were awarded their first Michelin star this fall, which is one of the highest honors that a restaurant can achieve. Like GLIDE, a core value that is true to the mission of The Progress is the importance of community. They serve their meals family-style on shared platters, and publicize themselves as “the greatest dinner party ever”.

“I think it’s really taken from the idea that so many of my favorite meals have been the meals that you share. It’s not an exclusive sort of dining experience. Most cultures around the world are centered around multiple dishes—there’s a community exchange,” Brioza explains.

Thinking about “what’s for dinner” — and with who — can be a respite from this, at times, isolating and technology-induced lifestyle. The people who benefit from GLIDE’s program do not experience the same kind of isolation that the demography who can eat at The Progress and work down the street do, but they do all the same.

Avila says, “We Americans in general are a little too isolated in how we live. For a number of people that GLIDE serves, that isolation is really extreme. Many of them have little or no contact, or little positive contact, for the rest of the day. It becomes all the more important to have a place where you have community,” adding, “When we think of wellness here, we think about health in a broad sense. This includes a healthy social life, and contact with people and engagement with people, a sense of community.”

Avila notes the social determinants of health saying, “It’s a real thing, that health isn’t just a thing you quantify with blood tests or number of meals per day.” According to the World Health Organization, the determinants are the “conditions in which people are born, grow, live, work and age.” Eating is an essential aspect of the conditions in which someone survives.

In 1943, Abraham Maslow, a psychologist from Brooklyn published his theory of the human’s “hierarchy of needs,” which was included in his essay A Theory of Human Motivation. The foundation of Maslow’s pyramid is physiological: humans need the basics to live, like food, water, and air. After safety, Maslow saw the importance in love and belonging, and showed why it’s necessary for all humans to feel both. Becoming part of a community is part of survival, and eating while embracing togetherness subtlety fulfills two very specific needs, a necessity blind to all class constructs.

“How do we use food in different social practices? I think that’s much of the real question,” Brioza asks, adding,“I’m a born and raised Bay Area kid. Food was placed in the center of the table for me growing up. I’ve lived in New York and Chicago and the Midwest, and there’s something old school about the idea of everyone getting their own plate of food.”

Restaurants have the ability to reveal the way people live and the way they conduct their social practices. Brioza notes this, saying, “What do other restaurants in other parts of the country mean to people? What are they used as? In New York, restaurants are really a place for business. We’ll see a table of businesspeople and they’re all sharing food, and I’m like ‘hmm, they seem uncomfortable with this idea’. For us, it’s more of celebration than a business engagement.”

The basis of the idea that eating is used as a social practice is that interaction occurs at all. Humans have used it as a tool for this across the period of their lifetimes: from eating in the cafeteria as schoolchildren, to meeting in bars for beers, to hosting bustling Thanksgiving meals with their families. We seem to inherently understand the importance of unity, even if the places we congregate to eat and enjoy call to interact with complete strangers.

“A major change in your life can just start with coming in and having a meal,” George Gundry, the meals director of GLIDE says. “Among other things, we need time to settle down and relax.”