Too Much On Your Plate, Or Not Enough?- Food Insecurity at SF State 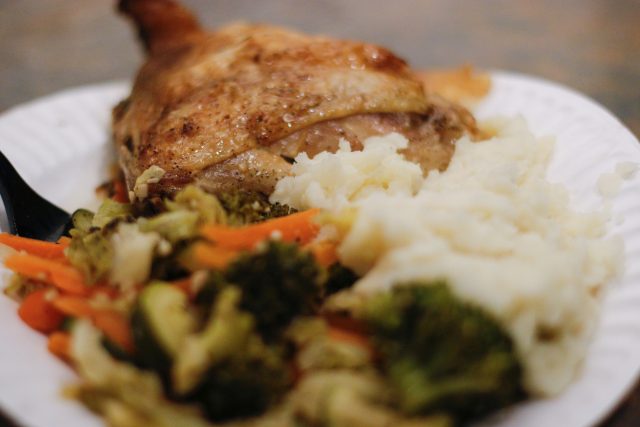 All-night parties, beer pong, and school work with no end: That’s what many people imagine when thinking about student life. But what about hunger?

At least one in five students attending a California State University struggles to pay for nutritious food and regularly skip meals, according to the Serving Displaced and Food Insecure Students study done by the CSU to “shed light on how CSU campuses were meeting the needs of displaced and food insecure students.” San Francisco State University is not there to help — yet.

Finding the means to support oneself is a challenge that usually comes before a job, school, and family obligations. The need to pay off rent, tuition, books, and food can lead to feeling overwhelmed, says nineteen-year-old theatre major, Cherokee White.

“How many CSU students are food/housing insecure is still an estimate,” Toni Molle, Director of Public Affairs for the CSU, says. “Many students do not report.” To find out the real number of how many students would use the food services, CSU administration launched a second part to the research.

“Once completed, the results of the research will be used to help shape policy and programs at the CSU, and on our 23 campuses,” says Molle.

“It’s kind of surprising,” Lina Tran, a twenty-two-year-old health education major, says. “Since San Francisco is the most expensive city in California.”

In the absence of food programs on campus, personnel in Financial Aid, Disabled Student Services, Counseling Services, and faculty are often where students begin to seek support, according to the research.

“Whenever a student comes to us in the Dean of Students Office seeking help, we work closely with them to provide the support and resources that they need,” says Mary Ann Begley, Interim Associate Vice President & Dean of Students at SF State.

Resources include short-term loans, such as the Hope Fund Crisis Loan, which assists students dealing with an unanticipated crises. There’s also a pilot pop-up pantry, created by SF State’s Associated Students, that began earlier this semester. Begley mentioned that at least fifty students have already began taking advantage of the program.

While still developing specific policies for SF State students, Begley said the university is open to work with off-campus organizations as well.

One of the closest food pantry services available to students can be found at St. Francis Episcopal Church, located two Muni stops away from SF State. The church provides free food for community members in need every Wednesday.

Artist Benjamin Julian uses the church’s services, not to support himself while getting through school, but to feed his wife, two-year-old son, and to continue living in San Francisco.

“The economy in San Francisco is very strong; the housing crisis made it for us. If I told you how much I pay for rent, you’d pass out! You’d faint,” he said, referring to a price that is too high. “So what are you gonna do? Do you stay in the place or do you bail out?”

Julian became unemployed in October and began visiting the church last month. After filling out an application, he has to wait one to two weeks for his card to arrive, but church volunteers agreed to provide him with food in the meantime.

Julian found the church, along with several other SF-Marin Food Bank options, on an online food locator, by entering his zip code.

“We do have some students here, but a very small percentage,” coordinator Carol Thollander says. “The reason might be the timing: We serve food from 3:45 to 4:30 p.m., and many of them may be in class, and we are not that close to campus.”

Another reason students are hesitant to use the church’s resources is because many believe food pantry services are targeted towards people below poverty level.

“[A] Food pantry can be a good solution for students with lower incomes,” Kant Nguyen, political science major says. “But for the vast majority who are above lower or middle income, regular [food] service on lower price would work best.”

Some SF State students are content with the price range in the cafeteria, but for twenty-three-year-old criminal justice student Leslye Chavez, healthy and heavy options are not very affordable.

“We choose these options because they are cheaper,” she says, while holding a piece of pizza. “It would be nice if other options were cheaper too.”

Chavez isn’t the only student who feels this way either.

“The cheaper the food is, the worse it is usually for you,” White says. More affordable options are available for students, but it comes with the cost of health risks and insufficient nutrition.

Focus groups and interviews will take place on campus in March. The school plans to release the research results in early 2018, and after that — to tailor a new food program to the needs of San Francisco State students.