Out Of Options: International Students Fear Having To Find New Ways Of Making It In The Country 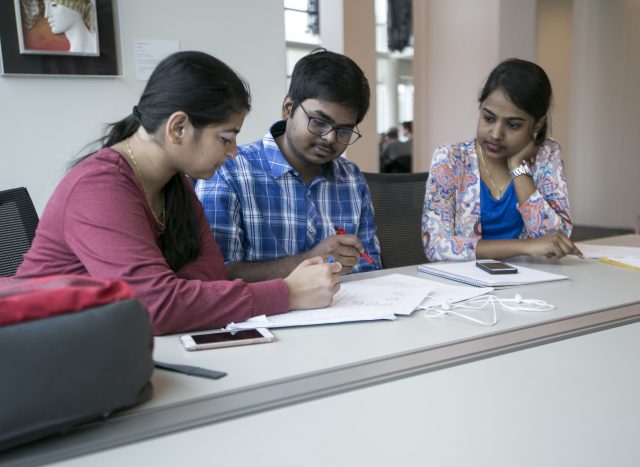 As I approach my last year in college, and time as a student (perhaps forever), I feel the atmosphere change and air getting thicker. Goosebumps travel along my arm as a reaction, not to a sudden change in temperature, but to the realization that hits me; this might be the end.

The presidential election of 2016 didn’t just change the life of American citizens or permanent residents of this country, it affected people beyond U.S. borders.

I used to have a solid plan. I would move to America for school and finish my bachelor’s degree in journalism before pursuing a career in news reporting with a focus on international relations. It wasn’t an easy plan, but I was determined to work hard for my dream because I love what I do, and a career on this side of the Atlantic Ocean would give me a greater spectrum of opportunities.

Or so I thought.

Because of the results that evening in November, international students’ chances of staying after graduation may not only decrease significantly, but almost cease to exist.

One of the biggest uncertainties regarding Optional Practical Training (OPT), a program helping international students branch into the work-scene of the United States, is its future in this country. The existence of the program is rumored to be compromised after the recent executive change, and if it gets cancelled so do my future plans of staying in this country.

For people who may not be familiar with the OPT program, it is basically a way for international students to legally work in the country, usually after graduation, as an extension of their student visa. Although the program comes with some rules, it’s a way to dip one’s toes into the “real world” with chances of obtaining a more permanent position at the end of the twelve-month period.

Even if this program is not the only way of working after graduation, it is the program with the least restrictions. Many of the other opportunities for international students to work after graduation require either costly investments, or a sponsored visa from an employer.

The OPT is a way to show an employer one’s skills without additional costs, and giving them a chance to evaluate and decide if the person is worth sponsoring for an actual work visa. If the program goes away, many international students will have to say goodbye to their future here in the States.

Martin Lawler, a lawyer working closely with foreigners who want to work in the United States, said there are rumors of shortening the twelve-month program in the works, and a consensus among legislators is that the time frame will be cut back.

Graduate student Sairoop Dasaraju, twenty-three, is originally from Hyderabad, India, but started his master’s program in embedded systems and computer engineering at SF State this spring. He is one of many F-1 international students planning to use the OPT program after graduation, and hopes of finding employment in Silicon Valley.

“But in the long-run, I don’t want to stay in America,” Dasaraju says. He continues by explaining how he wants to learn about the latest technology from the tech companies in the United States with hopes of bringing this new knowledge back to India.
“Back in India, they’re at least one generation behind the companies here, so I want to know how they work, and what technology they’re using right now. And then I want to go back and start a company of my own.”
Dasaraju said he heard the rumors of a shorter or even terminated OPT program, and that people from back home who are planning on getting their education in the United States are now reconsidering.

“A lot of my friends have cancelled their plans of coming to America actually, because of this,” he said, and added that many of them are skeptical of the future.

This seems to be a common reaction among international students. The San Francisco Chronicle reported a drop in the group among the University of California schools for the first time in a decade. The amount of undergraduate applications, which are due in November, for international students who start school next fall dropped by one percent, reversing a ten year long trend of increasing amounts of student applications.

These results are also mirrored in the amount of fall applications to SF State from international students.

“Yes, we are seeing a slight decline comparing with the number at the same time last year,” Dr. Yenbo Wu, Associate Vice President of the Division of International Education at SF State, wrote in an email. “We have accommodated 2,422 degree-seeking international student applications as of April 17. Last year on the same date, we had accommodated 2,583.”

Although the change is small, with only about a six percent decrease, it follows the same pattern as the UC system.

SF State has shown great involvement in its most vulnerable communities after the election –  international students being one –  offering a lot of help and guidance for students.

One way has been through workshops the school has scheduled during the semester to inform international students about work-visas and ways to obtain permanent residency. The university invited lawyers to speak about the process, and the three-hour sessions also enabled students to ask individual questions.

One of the lawyers in charge of one of these sessions, Jum Mayrock, said there was a higher level of tension this spring stemming from the anti-immigration approach of the new Trump administration. He added that it was a “pretty lively session” with questions about the process of going from being an international student to gaining a green-card.

“Our responsibility is to explain what comes next,” Mayrock added, and said he recommends students utilize the OPT because it is a great way to gain work experience without any real expenses.

He also advised not to worry about the future of the OPT and that they were merely “rumors” regarding the termination of the program.

However, a program he is certain will change in the future, because of current re-evaluations, is that of H-1B visas. This process grants non-U.S. citizens, or green-card holders, the chance to work in the country for three years, a cost the employer would sponsor, with an opportunity for extension.

Recent years have shown a 1:4 ratio between applications and actual issued visas, through a random process with only a few lucky winners. This lottery-characterized process has been critiqued both by employers who sponsors the visas, and students such as Dasaraju, who are urging a change to this “unfair” system.

And then comes the most taboo of all the options on the road for a green-card — a sham marriage.

Although I may have joked about this many times during my more than three years in the United States, I can’t block the occasional thought that says, “is this my only option left?”

“Don’t do phony marriages,” Lawler has told any immigrants who have approached him with the seemingly innocent question. “They are illegal, they are immoral, and there will be serious consequences if you get caught.”

He adds that the government is very good at busting these types of fake marriages, and strongly advises immigrants not to engage in them.

As months pass and President Trump issues more executive orders, we move closer to the chances of OPT or H-1B changing significantly, or being the next to go , and I along with it.

I don’t mean to sound privileged or spoiled. I understand that I am not in my home country and that I have no rights to demand anything. The new president has promised to focus on the well-being of Americans, and to bring jobs back to them at the expense of immigrant workers, perhaps as it should be.

But is this wise? Never in my wildest dreams could I have ever imagined being kicked out of the United States, the land of the free, with greater opportunities than anywhere else. A land characterized by its “melting pot” ideal, built on immigration.

I was naive enough that when I moved, a little over three years ago, I never created a plan B. So I plead you President Trump – please don’t take my dreams away.