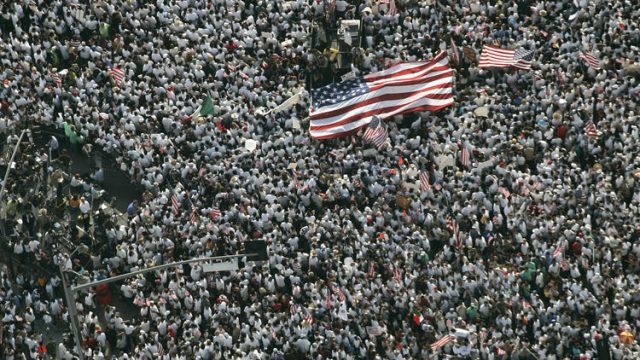 Protesters march down Wilshire Blvd. during an immigration demonstration on Monday, May 1, 2006. (Photo courtesy of Los Angeles Times)

As I walked through Marco Forster Middle School’s courtyard, the murmurs between classmates began: “Are you cutting class or are you walking out?” Prior to the rise of social media, events spread through word of mouth between classmates and friends. A dash through the side of the main building, down the hill, and into my friend’s silver car was an easy way to avoid all on-duty campus monitors. After a smooth escape, everyone inside the car cheered as we went on our way to meet the other demonstrators. It was May 1, 2006 when I participated with 500,000 other people in a “Day Without Immigrants” peaceful protest in Los Angeles, CA. The passion behind the chants were not only heard, but felt.

As a child, it was perplexing to fully comprehend what the act signified, but after witnessing genuinely good people being separated from their families, it formed a dark reality. I recall several of my friend’s mothers hesitant to leave their home, frightened that they might be removed from the country, or worse, taken away from their children. There are a few moments that will forever stand out in my life, and the 2006 “Day Without Immigrants” protest is one of them. The urgency was felt in joining together, and vocalizing that immigrants do contribute to society, and most importantly are human, similar to any citizen in this country.

The 2006 protest arose after Wisconsin Republican, Jim Sensenbrenner’s bill H.R. 4437 Border Protection, Antiterrorism, and Illegal Immigration Control Act of 2005, passed under George W. Bush’s presidency. The Hispanic/Latino community was hit the hardest as Immigrations and Customs Enforcement (ICE) raids instilled fear by deporting and incriminating undocumented immigrants. If a person is an undocumented immigrant than he/she is seen a criminal because they did not go through proper protocol before entering the country. The feelings brought out by the political climate perpetuated secrecy among those undocumented causing many not to attest their immigrant status.

Disclosing that a person is an immigrant, especially an undocumented immigrant, is often looked down upon. The social stigma affects an immigrant’s outlook on life, according to Professor Leisy J. Abrego, as she points out by saying,
“Legal status powerfully informs how people see themselves, and their rights in the United States. Many begin to internalize that notion that they have no rights.”
This statement comes from Abrego’s May 25, 2011 issue of Law & Society Review.

The movements that transpired caused big enough waves to propel the Development, Relief, and Education for Alien Minors (DREAM Act) creation, under the Obama administration. The bill  granted undocumented immigrants conditional residency as they met the suitable requirements, such as arriving into the country before age 16, attending high school or GED diploma, and having a good standing record to obtain permanent residency.

However, ten years later a similar scenario is reoccurring – it’s like deja vu. President Donald J. Trump aims to tighten the U.S. border with Mexico, and hire additional immigration officers, as well as increase detention capacity, once again threaten immigrants in the U.S.

A quarrel sparked over a Deferred Action for Childhood Arrivals program (DACA) participant Daniel Ramirez Medina, who was arrested early February by ICE. Legally under DACA, he has the right to be in the United States, but claims of an alleged gang affiliation have him detained until his immigration court hearing sometime in March. The reemergence of ICE raids have ruffled feathers, and put into question if the legality of DACA will be recognized by President Trump. #FreeDaniel went viral along with stop #ICERaids. A protester’s sign, reading “DACA is more than a dream it’s a promise,” was shared over hundred of times on various social media sites.

However, the controversy over President Trump’s refugee ban and border control propositions united thousands across the country to participate once again in a “Day Without Immigrants” protest, confirming their opposition. Videos of the event were live streamed, and photos were taken of signs stating “Immigrants and Refugees Welcome! Fascist Trolls No!”

There is a different sentiment this time around. Instead of hiding and shying away from one’s immigrant status, people are proclaiming it loud and proud. Social media has impacted this outcome by giving a platform to those who are willing to share their story, voice, and opinions. The disapproval towards President Trump’s ban united the masses all over the world causing them to like and share, on Facebook, Twitter, and Instagram, their own reaction. A sense of community was formed when people from diverse race and ethnicities concurred about similar beliefs.

With 9,500 posts and counting on Instagram, including various images and videos of American Vogue Creative Director Grace Coddington, model Winnie Harlow, and everyday civilians have begun sharing their story with the hashtag #IAmAnImmigrant.

Shirley Sarker, who migrated from India, expresses her connection to the movement by sharing her brother, Sony Sarker’s Facebook post on Twitter. Sarker’s post states, “Immigrants are a tough, self-selecting group. It takes a strong will, deep sense of sacrifice, and courage to leave all you know with little more than an optimistic belief in America. Thank you Momma and Babi.” Accompanied with the post is a picture of a youthful Shirley Sarker, Sony Sarker, and their parents.

I am an Immigrant’s campaign has founded the movement that encourages everyone to embrace their heritage.
“Now – more than ever – it is important to demonstrate how America’s diversity – fueled in great part by immigrants – makes us stronger and more connected as a nation,” the campaign says on their website.
Another display of support is seen on W Magazine’s “I Am an Immigrant” black-and-white video where photographers, models, and designers look directly into the camera as they announce “I am an immigrant.” The unifying stance amongst accomplished models and designers weighing in during a tumultuous time was startling.

This video could have been expected from activists and humanitarians, but instead it was produced by the fashion industry, an industry known for its aesthetic statements not social awareness. At first, it may seem unusual to see the fashion industry weighing in on a heated political topic, however, in watching the video the diversity in their community shines through and makes an impact.

Perhaps it is easy for celebrities to proclaim they are immigrants because they have the means to afford an immigration attorney or the means to get higher quality help, but their notoriety can motivate their followers to address the topic. They essentially are living the “American Dream”. They are proving that they are no different than other immigrants, when they chose to move to another country, in hopes of a greater future.

Social media has become more than just social networking sites. It is a platform that gives an opportunity to anyone that is willing to share it, especially those who feel they have no rights. The movements that have occurred over the past few months have been retweeted, reposted, and shared collectively over millions of times.

A new survey by the Pew Research Center’s Internet & American Life Project finds that 31 percent of social media users have used the tools to encourage other people to take action on a political or social issue that is important to them someone who could not attend a protest or event  could contribute and participate by sharing their story through these widespread hashtags.

The notion that a person is a second class citizen because they were born in a different county has slowly begun losing its meaning, as a result of social media activism. Through these hashtags and posts, immigrants have begun owning a word used in the past to alienate them. They are reclaiming the label in a digital age, where mass communication is more accessible than ever, putting social media at the forefront of a movement.