The Art Of “Chanoyu”: Bringing Japanese Tea Culture To Life 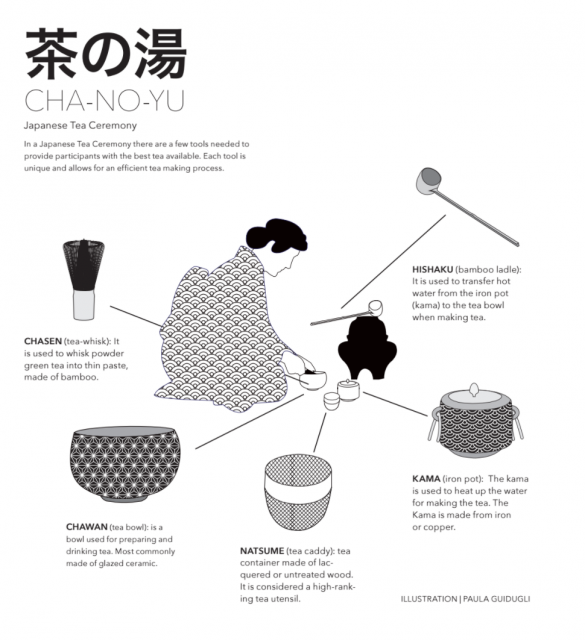 Walking into the tea room at the Nichi Bei Kai Cultural Center in Japantown brings back memories from the time I visited Japan last summer. The authentic tatami mat, doors made from white mulberry paper, and a sign written in Japanese above a vase with wild flowers, decorate the tea room. The coordinators, dressed in traditional kimonos, start  preparing the equipments for the tea ceremony.

The first Saturday of the 50th Cherry Blossom Festival greets visitors with a sunny day, and its tea ceremony is one of the events that people can participate in and learn more about tea culture in Japan. It is now 12:45 p.m. and all eleven guests are ready for the tea ceremony, or “Chanoyu”, which literally means “hot water for tea.” One by one, the guests walk to the front of a sign written in Japanese, sit on their knees, and bow on the mat to show respect to the host and to the preparation the host has made.

As an international student from Thailand, the most interesting part of studying in the U.S. is the culture. There are a lot of differences between Asian and American cultures. It is difficult for students coming from Asia to relate to American cultures, and since Japanese culture is quite widespread here in the U.S., it is what I could relate to the most. That is why I became interested in the Japanese tea ceremony.

Sitting in a graceful posture, the tea practitioner, Midori McKeon, a San Francisco State professor of foreign languages and literature, starts scooping hot water with a bamboo ladle. The first thing served is a small, round, mochi-look-alike called “Wagashi”, which is decorated with pink cherry blossom flowers, and made from sweet rice. When the dish is served, the host and the guest have to bow at the same time, placing both hands on the mat. As a tradition, she pours the water into a bowl, and starts cleaning all the equipment to be used in the creation of matcha green tea in front of all the guests.

According to the Asian Art Museum, Japanese Buddhist priests brought the tradition of serving powdered green tea from China to Japan in the twelfth century. Powdered green tea was used as an aid for Zen priests to stay awake when meditating for long periods of time. In the fifteenth and sixteenth centuries, the tea ceremony emerged as the form it is known as today.

Professor McKeon starts scooping matcha green tea into a bowl, then she pours hot water and starts carefully whisking tea powder into a thin paste. She takes the art of making green tea seriously. At the turn of the century she began studying to become a tea practitioner at the Ometeseuke School of Tea in Kyoto and was certified by the school nearly nine years later.
“Tea ceremony is regarded as zen meditation in action. Because when you are perfectly concentrated only on what you’re doing, with no worries about tomorrow, and no regrets in what you have done in the past, you are living in the here and now. Your mental state will be different. It has the same effect as zen meditation,” she explains.
Matcha green tea is served in handmade ceramic bowls, beautifully painted with flowers and leaves. When the tea is served, the host and the guest bow once more. In Japan, bowing is a sign of appreciation and respect. Taking part in the tea ceremony teaches a lot about respect, guests have to bow every time the host serves something, or when the tea practitioner answers your questions. It is a beautiful way of showing respect to one another.

“Chanoyu is about people. We regard each tea gathering as a precious once-in-a-lifetime meeting, which can never be reproduced exactly the same way,” she raises her index finger to emphasizes her point. “Maybe the same guests come, but something is different. So we treasure each other’s company, the guests and the hosts. We say, ‘Thank you for your time and let’s have a great time together’. We call it ‘ichigo ichie’; one meeting, one lifetime,”

Situated in room 117 of the Humanities Building at SF State, a rectangular, light-wooden tea room, surrounded by zen gardens, is a hidden gem that not many people know about. According to Professor McKeon, the tea room was brought to California in the early 1990’s by a company called Adashi Industries in Tokyo. The company originally wanted to sell the tea room for one-hundred-thousand dollars, however, there were no tea masters willing to buy because of the tea room’s small space that could not be used for general gatherings. So they decided to donate this tea room to SF State so that students can learn more about Japanese culture.

Pairot Phongaryukul, hospitality and tourism management student at SF State, took part in the tea ceremony on the first day of the 50th Cherry Blossom Festival.

“It was my first time taking part in the tea ceremony. I really enjoyed learning Japanese culture and I’ve heard that it takes many years to study to become a tea practitioner,” he explains. “You need to be very patient and calm in order to practice it. I’m impressed with all the process in the ceremony and the mochi is really good.”

The ceremony is not limited to SF State Students,  anyone can participate in the “Tea Ceremony” at Nichi Bei Kai Cultural Center in Japantown during the first week of Cherry Blossom Festival. Another event is the “Autumn Tea Festival” (Chanoyu party) that is held every year during the international education week at SF State.

“I would like to emphasize with pleasure that I have participants from every discipline, not just Japanese program students,” she flails her hands to match her emotions and continues.

“That’s the pleasure of offering tea ceremony for the campus community. We meet various people and it is wonderful to know that regardless of the academic discipline, they’re deeply interested in cultural events and would like to learn other countries’ traditions. That’s the diversity of this university, the open-hearted spirit, which I sincerely appreciate and I’d like to continue [the Chanoyu party] as long as my knees last,” she ends with a cheerful laugh.

In the tea ceremony, bowing is a way of respecting each other. This is a similarity between Thai and Japanese cultures. In Thailand, we respect one another by placing two palms together in front of the chest, bow slightly, and say “Sawasdee Ka/Krub” (Ka for female/Krub for male). The gesture usually occurs when younger person greets someone older as a sign of respect. Participating in the tea ceremony, therefore, makes me feel closer to home.