The Alternative Proms of 924 Gilman 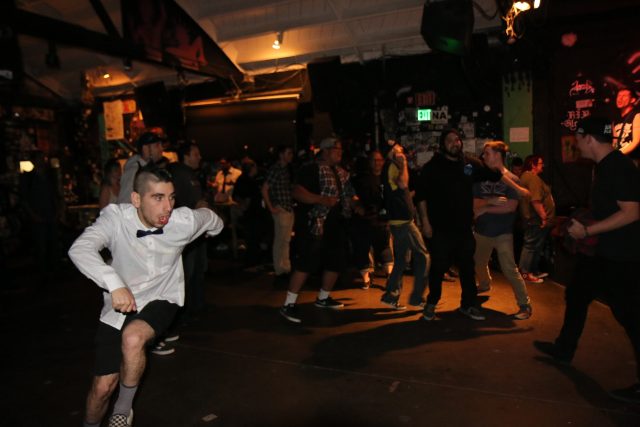 A night filled with dancing, laughter, and high school memories, but also includes stress and the occasional tear comes from the society pressures of wanting to have the perfect prom night.

The 924 Gilman community center holds a large variety of shows open to the public every weekend, and last April they held their very first Queer Prom and fifth annual Punk Rock Prom as alternatives to the traditional high school dance.

Tuesday Paine, along with her partner Mari Campos, were able to organize their Queer Prom in only around two weeks. Having successfully completed their first prom in such a short amount of time, the two are excited about all the possibilities for next years prom.

“With two weeks warning, Tuesday and I cobbled together and threw a Queer Prom show. It started off as a simple gathering of LGBT identified local bands. We wanted to make the cover low since we were able to make this event just because there was an open Sunday on the Gilman calendar after another show dropped,” says Campos.

The place is a DIY style venue where volunteers like, Paine and Campos, have to do all the decorating, cleaning, and organizing themselves.

The idea of a Queer Prom came from doing Punk Rock prom dances and wanting to give queer students a prom experience they may not have in high school, says Paine.

The dance started in the early afternoon with a film from the nineties followed by a concert that night on Sunday, April 22. The show featured an acoustic solo opening to a DJ headlining.

Paine says that she views Queer Prom as more of a dance or party rather than a formal prom.

Campos follows with, “Queer Prom is meant to be for queer kids because prom can be really awful and awkward if you’re there and all your friends are there with their straight dates and this is just a chance to throw a party for people who would otherwise be wallflowers anywhere else.”

[ngg_images source=”galleries” container_ids=”8″ display_type=”photocrati-nextgen_basic_slideshow” gallery_width=”600″ gallery_height=”400″ cycle_effect=”fade” cycle_interval=”10″ show_thumbnail_link=”0″ thumbnail_link_text=”[Show thumbnails]” order_by=”sortorder” order_direction=”ASC” returns=”included” maximum_entity_count=”500″]Those in attendance were encouraged to wear their own choice of clothing or prom attire to both the Queer Prom and Punk Rock prom. If people attending the event chose to dress for the occasion, then their entrance would have been free with only an admissions fee of two dollars. Otherwise, the entrance would cost seven dollars.

Queer prom provided guests with food, drinks, and candy throughout the night.

The Queer Prom lacked attendance because there was not enough awareness on the event, says Campos, however expects, attendance to double with more promoting for the dance over the years.

After the weekend of Queer Prom, 924 Gilman held their fifth annual punk rock prom which had more preparation and time to organize.

“Years ago, way before it was an old idea and they didn’t do it, until Astebo, who plays for the band, Falcon A and was a booker here for a long time started booking Punk Rock Prom. It all was created kind of like, ‘Hey we should bring it back’,” says Smith about the way Punk Rock Prom.

“I got dragged to regular prom, you know, went through that whole thing and I would have rather come to a punk rock prom,”

says Smith, looking back at his high school prom experience.

The Punk Rock Prom was held on April, Saturday 29th with over four bands playing.

Events at 924 Gilman feature bands who volunteer to play, then they will hire  additional acts if necessary. Astebo plays in the band Falcon A, performing in the Punk Rock Prom and from there he found other bands to participate in the event too.

Since Gilman is a very DIY style venue, staff members are committed volunteers who help organize events, clean, and maintain the place.

“We are non-profit now, but we were for profit for a long time. Basically, the shows pay for the billing. With the two dollars required memberships and we usually take donations at the door, but we don’t really have any outside money. We have donations up on the sight and things like that, other than that there’s not really any outside funding, it’s all from the community and people showing up” says Smith about the 924 Gilman upbringing.

924 Gilman prides itself for being a safe zone to all community members. The community center is now a nonprofit organization since 1986, open to all ages, with no tolerance toward homophobia, transphobia, racism, sexism, drugs, or alcohol.

After being open for so many years, the question of further stability in funding arises,  but Smith reassures the public that, they are not worried about the lack of funding because they have so many bands, and so many people that want to play at Gilman.

“Basically, I got involved with the club, first I played here, and then booker by the name Tony Two Tone, who does a lot of our sky nights, approached me. I mainly book hip- hop night here, and then over time got voted in and here I am,” says Smith.

Pains’ experience with Gilman goes back to when her father played in a band for Look Out Records, a recording label who helps start up bands.

Look Out Records featured the band Pain’s father played for during their New Year’s festival at Gilman and that was the first time she attended a show.

She was raised hearing various stories about the bands that would play at the community center like Green Day and Operation Ivy.

“I first came here when I was 12 or 13 years old. I wasn’t living in the Bay Area but when I moved here, I actually attended a show where, my now partner, had opened for. I began volunteering in the snack shop department then I moved to the sound department. So I’m here every weekend,” says Paine.

Pain also says that her early years at Gilman have helped shape her into the person she is today.

Campos  started coming to Gilman at the age of 12 after having read about the place on  Green Day Wikipedia.

Big bands like Green Day have played at 924 Gilman events, leaving their mark with graffiti writing on the walls. Their concert was also featured as “The Green Days Manic Surprise Return to 924 Gilman” on the RollingStone website.

“I found out that this place was in my town so I just started coming to the shows. I didn’t know what bands were coming, most of the time, but I would just come hear the bands play for fun. After I started volunteering, because I wanted to get in for free, I was positioned to work in the front door with the task of stamping hands, then I moved on to be the head of sound,” Campos says about how she got involved with Gilman.

Then adds, “On the flip side I was playing in a band and began booking my own show to then  putting together other shows. Gilman is a cute little warehouse where I learned to do everything.”

Head Security at 924 Gilman, Edward De La Cruz, also known as Eddy says, “This will be my third year at Gilman. My wife initially worked here, and yes, I replaced her. Of course, she was ex head of security, and everyone is pretty good about picking the right people to work for Gilman.”

As head security, Cruz says that almost everyone attending any event at 924 Gilman is aware of the rules explaining that there hasn’t been any major issues at the community events.

“I’m an all-around counselor, big brother, whatever you know, youth canceler if needed, and I don’t mind at all.

Practically my job entails watching out for this place and the kids involved with the club” says Cruz.

924 Gilman strives to bring everyone with different backgrounds together by allowing all genres of music play and perform.

“The most interesting thing I’ve seen here at Gilman is bands, hands down. My favorite band I’ve seen play here is English Dogs, from the UK, they’re just a favorite of mine since I was a kid and the chance to actually meet them, come and hang out with them here was really good, really fantastic” says Cruz over his personal experience.

Smith states that the proms at Gilman are more community based and less focused on money.

“They don’t feel any of the societal pressures brought on by regular prom,” says Smith.

“One of my biggest philosophies is that there is no reason for there to be no women, people of color, or queer people on stage. Shows that are just all just straight white men are so obsolete at this point because those aren’t just the only bands that are here. Oakland has such a vibrant and diverse music scene that there’s no point on letting that scene not be heard” says Campos.